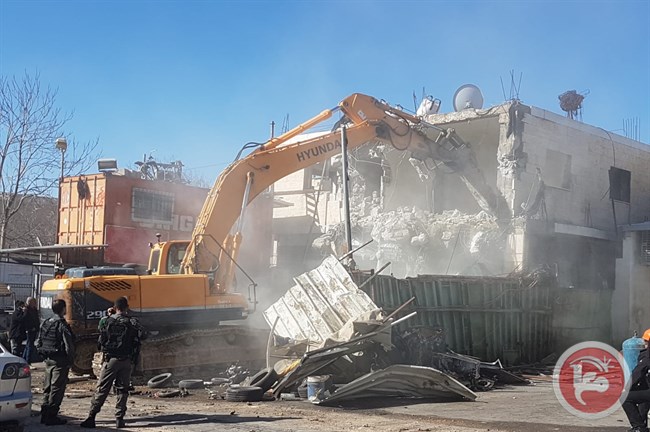 JERUSALEM (Ma’an) — The United Nations Office for the Coordination of Humanitarian Affairs said that in the past two weeks alone, Israeli forces demolished 41 Palestinian-owned structures in occupied East Jerusalem and Area C of the occupied West Bank, displacing 38 Palestinians and affecting 121 others.OCHA said in its biweekly Protection of Civilians Report that the demolitions took place under the pretext that it was built without the nearly-impossible to obtain Israeli permit.

It is noteworthy that during the demolition process, Israeli forces physically attacked Palestinian families, including women and children, with rubber-coated steel bullets, tear-gas bombs, and pepper-spray.The report continued that on April 25th, Israeli authorities blew up a family home in az-Zawiya village, in the northern West Bank district of Salfit, on punitive grounds, displacing a family of seven, including five children.The home belonged to the family of a 19-year-old Palestinian who was suspected of killing an Israeli soldier and an Israeli settler, and injuring another soldier, near the illegal Israeli settlement of Ariel in March.

Omar Abu Leila was subsequently shot and killed by Israeli forces in Abwein village, north of the central occupied West Bank district of Ramallah,The report added that this was the fifth such demolition since the beginning of 2019, compared to six in 2018, and nine in 2017.Regarding Israeli settlers’ violence, OCHA reported thirteen attacks were carried out by settlers during the same period, resulting in injuring three Palestinians and causing material damage to Palestinian property across the West Bank.

Since the beginning of 2019, the bi-weekly average of Israeli settler attacks resulting in Palestinian casualties or property damage has witnessed a 40% and 133% increase, compared to the biweekly average of 2018 and 2017.