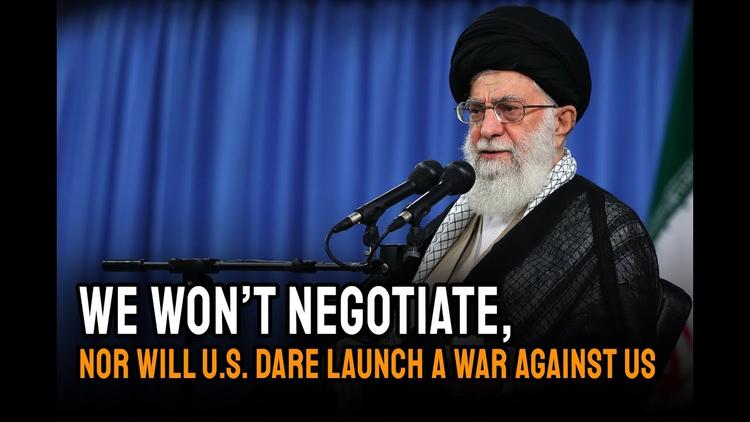 Ann Arbor (Informed Comment) – The private Tasnim news agency reports from Iran that in a speech to thousands of university students, Iran’s clerical leader Ali Khamenei made an unusual and extraordinary criticism of president Hassan Rouhani and foreign minister Mohammad Javad Zarif over their handling of the 2015 Joint Comprehensive Plan of Action or deal on limiting Iran’s nuclear enrichment program.

A student asked him about his views of the JCPOA. Khamenei pointed out that he had written a letter during the negotiations with the permanent members of the UN Security Council laying out the requirements of any deal. He said that the final JCPOA had not met those requirements, but that as a spiritual leader he was reluctant to intervene directly in the executive branch of government (headed by the elected president, Hassan Rouhani, now in his second term. It is Rouhani who appointed foreign minister Zarif–though with parliamentary approval and implicitly that of Khamenei.)

Iran’s distinctive form of government has four branches, not the three mentioned in Montesquieu’s Spirit of the Laws. In addition to the executive, the legislative and judicial branches, there is a clerical branch that in some ways oversees all three. The clerical Leader (who is referred to in Persian as “exalted,” not “supreme”) is commander in chief of the armed forces and controls the intelligence agency. He can dismiss the president and prorogue parliament. He can veto legislation. He can close newspapers. In some ways, he has ultimate review powers analogous to those of the US Supreme Court. But despite the vast range of his power, the clerical Leader seldom actually attempts to micromanage governance.

Khamenei appears to be attempting to avoid responsibility for the nuclear deal, putting it entire on Rouhani’s shoulders. It has not in fact traditionally been the case that he declined to involve himself in the affairs of the executive, and all nuclear negotiations have required his go-ahead, though it is probably true that the JCPOA was only inked in summer 2015 because Khamenei did not attempt to micro-manage the negotiations.

Khamenei is also, by criticizing pragmatic centrists, attempting to pave the way for hard liners to win the next presidential and parliamentary elections.

Khamenei said Wednesday that he feels it is inappropriate for the Leader to intervene in the executive unless it is on an issue that affects the Islamic Revolution and its movement.

He said that he never had much faith in the nuclear deal, given the precise shape it took, and had repeatedly communicated his reservations to president Rouhani and foreign minister Zarif.

Khamenei was known to have distrusted the United States and doubted its ability to negotiate with Iran in good faith. The Obama administration got Iran to mothball 80% of its nuclear enrichment program and give up on programs that gave Iran “latency” or the technical ability to construct a nuclear bomb if it felt existentially in danger from a Bush-style invasion. In return for essentially giving up a pillar of its security, Iran was to receive relief from US and UN economic sanctions and begin to be able to integrate into the international system.

Despite Iran’s full compliance with its obligations, in 2017 Trump breached the 2015 treaty with Iran and slapped the most severe economic sanctions on Iran that have been applied to any country in history.

In recent weeks the Trump administration has declared the Iranian national guard, the Iranian Revolutionary Guards Corps, a terrorist organization and engaged in provocative military moves in an apparent attempt to provoke Iran into a militant response, thus providing Trump’s warmongers with a pretext for military action against Iran.

Iran got taken for a ride, having destroyed its stockpiles of low enriched uranium up to 19.75%, having mothballed its heavy water nuclear generator, having given up all but 6000 centrifuges, having accepted extensive and intrusive UN inspections– it not only got nothing in return but actually had more severe sanctions placed on it in the aftermath.

Rouhani and Zarif, the architects of the nuclear deal within Iran, now look like fools for trusting the US to live up to its side of the bargain. Severe sanctions are hurting the Iranian people, who had been expecting a windfall from the nuclear deal instead. Iran’s hard liners, who never wanted the nuclear deal, have been emboldened.

Khamenei sees the writing on the wall and knows that lightning is striking all around Rouhani, and so is stepping away.

Khamenei’s distrust of Washington is rooted in a long history of imperialism and oppression. The US overthrew the elected Iranian government in 1953 and placed the dictatorial Mohammad Reza Pahlavi on the throne, in part to control oil prices during the Cold War, and so as to use Iran as a pawn in its struggle against the Soviet Union. The 1979 revolution aimed at liberating Iran from the grasp of Washington and its proxy, the shah. In the 1980s the US supported the aggressor, Saddam Hussein of Iraq, in his brutal war on Iran, and the US de facto supported the Israeli occupation of southern Lebanon, branding the Hizbullah “terrorists” for fighting to get the Israeli occupiers back out of their country. The US has also given Israel massive aid, allowing it to blockade Gaza and gradually to steal vast swathes of the Palestinian West Bank from the people who have lived there for millennia. From Iran’s point of view, US policy in the region has been about the worst thing that has happened to the Middle East since the Mongol invasions, and Khamenei was not expecting good news from the White House.

Ayatollah Khamenei: “We won’t negotiate, nor will U.S. dare launch a war against us”