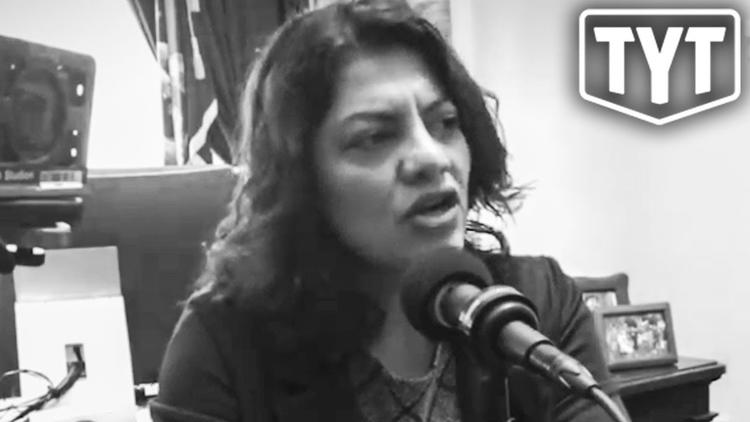 Ann Arbor (Informed Comment) – Rep. Rashida Tlaib (D-MI) gave an interview to Yahoo News Sunday. It is a wideranging interview, discussing her hopes that Trump is impeached (though she says she has toned that down because House majority leader Nancy Pelosi told her to concentrate on representing her district; she says she doesn’t want to undermine the majority leader.

She also spoke of the Congressional trip she is planning, in which the representatives will meet ordinary Palestinians and Israelis, not the political leaders. She says that the politicians are the ones who are dedicated to the fight between Israelis and Palestinians, but the regular people are worried about getting through their day despite the economic and practical obstacles they face.

Then the interviewer asks,

What is your vision for a one-state solution that meets both Palestinian and Israeli Jewish national aspirations?

TLAIB: Just a few weeks ago in our country we took a moment to remember the Holocast. There’s kind of a calming feeling, I always tell folks, when I think of the Holocaust and the tragedy of the Holocaust and the fact that it was my ancestors — Palestinians — who lost their land and some lost their lives. Their livelihood, their human dignity, their existence in many ways have been wiped out and some people’s passports, I mean just all of it, was in the name of trying to create a safe haven for Jews post- the Holocaust, post- the tragedy and horrific persecution of Jews across the world at that time.

This is a convoluted spoken, spontaneous sentence but it isn’t really hard to understand.

Its sentiment resembles that of Rev. Martin Luther King, Jr., in his iconic “I have a dream” speech:

“I have a dream that one day down in Alabama, with its vicious racists (Yes, Yeah), with its governor having his lips dripping with the words of “interposition” and “nullification” (Yes), one day right there in Alabama little black boys and black girls will be able to join hands with little white boys and white girls as sisters and brothers. I have a dream today. [applause] (God help him, Preach).”

Let’s turn the sentence around and see what is being said.

“it was my ancestors — Palestinians — who lost their land and some lost their lives. Their livelihood, their human dignity, their existence in many ways have been wiped out and some people’s passports…”

In 1939 the British colonial authorities in the Mandate of Palestine promised the indigenous Palestinians, 1.3 million strong, an independent state within ten years, i.e. by 1949. The League of Nations after WW I had made Palestine a Class A Mandate, i.e. a place that would not have to be ruled by Europeans very long before the locals took the reins of power themselves. Syria and Iraq were also Class A. Togoland in West Africa was a class B Mandate, suggesting the French might be there for a while. Iraq became independent in 1932, Syria in 1943, and Togo became independent in 1960. Palestine never did.

The British had let in to the Mandate some 500,000 Jews, and by the 1930s maost of them had been refugees fleeing Hitler. The Palestine Mandate was a small place; one British official observed with frustration, “there isn’t enough room here to swing a cat.” The Palestinian economy was largely agricultural, though there were some towns and a small urban middle class. There wasn’t much economic absorptive capacity, and the Jewish National Fund, which schemed to appropriate Palestine for a Jewish state, bought up land with US and other international donations and then refused ever again to sell it to a non-Jew. They managed to buy up 6% of the country by 1947.

In fall of 1947 the UN General Assembly produced a grossly unfair and non-binding partition plan that awarded far more of Palestine to the immigrant European Jews than their numbers or land holdings justified. It was not adopted by the Security Council and so does not have the force of law. (Israel today regularly laughs in the face of UNGA resolutions). The Zionist leadership of course eagerly announced their acceptance of a document far more generous to them than they could have dreamed. But it is not true that they actually accepted the UNGA map. David Ben Gurion, the Zionist leader, noted in his diary when Israel was founded that no borders were being specified, just as the US in 1789 did not specify its borders. The implication was that the Zionist leadership would not be satisfied with the territory awarded them by the UN. And they weren’t.

The Palestinians were outraged. Some turned to violence against the European settlers. From fall of 1947 through spring of 1948 about 1,900 Jews were killed. But in spring 1948, before Arab states declared war or began sending troops, several hundred thousand Palestinians were ethnically cleansed by Zionist militias from what would become Israel, leaving only a few tens of thousands Palestinians in the new state. Many were religious minorities– Druze or Christian– and the Muslims among them were often internally displaced and put under military governance. There isn’t a central document ordering this ethnic cleansing, but Ben Gurion promulgated Plan D for that expulsion through allusion and a wink and a nod, just as Slobodan Milosevic much later would do in Bosnia. All together, some 720,000 Palestinians would be uprooted, almost half. The refugees have grown over time to become millions.

So Rashida Tlaib is saying that her people paid a price. They were ethnically cleansed, displaced, had their homes and farms expropriated. Thousands lost everything, and millions still as a result live in penury without the framework of their own state to protect property and other rights. Rep. Tlaib would have a right to be upset, thinking about this injustice, the Nakba or Catastrophe of the Palestinians, the sinister twin of Israel’s proud Independence Day in mid-May.

She is made calm when she considers that her people’s land, Palestine, became a refuge for the Jewish refugees from the murderous Nazis. Although it is true that Jews and Palestinians have had a rocky relationship, it should also be recognized that there are Israeli-Palestinian partnerships and that the PLO recognized Israel in the Oslo Accords. (Yes, despite propaganda to the contrary that you still meet with in New York).

Rep. Tlaib is putting forward a nonviolent theology of Palestinian suffering. They have lost so much so that another people, victims of a world-historical genocide horrible to contemplate, could recover their humanity and thrive. But the Palestinians have paid an enormous price, and there is no reason for them to pay it forever.

She is gracious enough not to say so, but this entire Palestine-Israel conflict could have been avoided if cultured Europeans who read Goethe and Thomas Mann had not murdered 6 million Jews and expelled most of the rest. It could also have been avoided if Britain, the United States, Brazil and many other countries hadn’t refused to take in the Jews fleeing the Nazis. Because of American racism and the racism of other industrial countries that could have absorbed all those Jews, they were forced to go to Palestine.

That so many Israelis are descendants of Holocaust survivors helps her work through the meaning of Palestinian suffering.

“And I love the fact that it was my ancestors that provided that, right? In many ways. But they did it in a way that took their human dignity away, right? And it was forced on them. And so, when I think about a one-state, I think about the fact that why can’t we do it in a better way? And I don’t want people to do it in the name of Judaism, just like I don’t want people to use Islam in that way. It has to be done in a way of values around equality, and around the fact that you shouldn’t oppress others so that you can feel free and safe. Why can’t we all be free and safe together?”

Host: But a one-state solution with the right of return, I mean just– the math would suggest that Jews would become a minority in that state.

But Dan it’s not up to us to decide what it looks like, right? Just like when my African-American teachers taught me about neighborhoods they couldn’t live in, places they couldn’t work. It’s important to understand that separate but equal didn’t work here and we have to let the self-determination happen there.

“I didn’t give it up, Netanyahu gave it up . . . But uprooting people all over again? To say that that’s going to happen… because you understand when you look at the landscape, and just map it out, how he has proceeded to divide, proceeded to dissect communities, it is almost absolutely impossible to see a two-state solution without more people being hurt.”

… How do you distinguish your position from Hamas?

Somehow that sentence from the interview, which should have been the Lede, did not get quoted in the newspapers. Tlaib is leading on social justice, and if only we could replace the Trumps and Cheneys and Lee Zeldins with people like her, we might actually get through our current travails.

Tlaib is a hero and should be acclaimed as such.