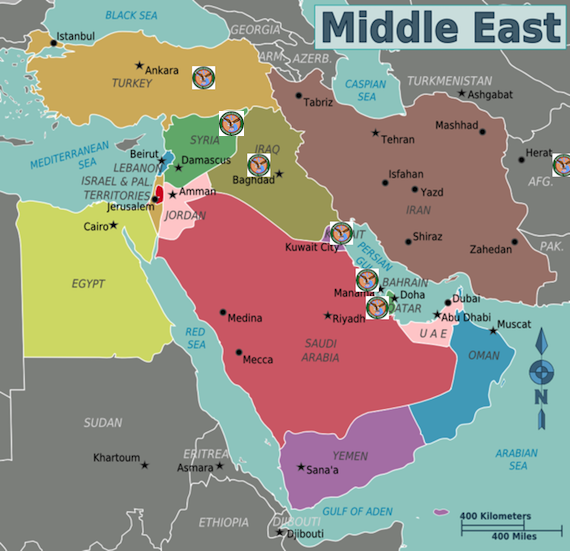 Ann Arbor (Informed Comment) – The Trump administration made a grand and empty show Friday of announcing the dispatch to the Middle East of 1,500 US military personnel, allegedly to signal Iran not to attack US troops in the region.

Update: Actually, it is 900 new troops and 600 having their deployment extended. I.e. nothing.

Except as bad theater, the announcement is meaningless. US bases in the region are not in danger of any significant attack by Iran, whatever the Man with the Angry Mustache says. Could Iran deploy mines or small unmanned undersea drones, or flying drones? Sure, but they’d be crazy to do anything more and they’d be careful not to have such incidents traced back to them. The Trump War Party seems to be counting on cult-like Shiite militias in Iraq to do some small katyusha attack so they can blame Iran for it (not all Shiites are on the same team, folks).

The US has retrenched its basing since the end of the occupation of Iraq. There is a base at al-Udeid in Qatar with some 10,000 troops. Iran has good relations with Qatar, which it saved from the Saudi boycott that began in 2017. The HQ of the Navy’s Fifth Fleet is in Bahrain. Both of them are ‘way across the Gulf from Iran and are in no danger whatsoever of being hit directly or in a big way by Iran. Iran does not have a navy, just some small boats and skiffs. Although Bahrain is majority Shiite, they mostly do not adhere to the same school of jurisprudence as Iran and don’t have ayatollahs, and can’t be read off as pro-Iran fanatics. They are patriotic Arabs and many Bahrainis depend on the US for their livelihoods.

There are another 10,000 or so troops in Kuwait. Again, they face no danger from Iran.

There are 2,000 US troops embedded with the Kurds of the YPG in northeast Syria. These US troops and the allied Kurds are fighting the remnants of the hyper-Sunni ISIL cult, which Shiite Iran also wants to see destroyed. US troops in Syria are not in danger from Iran. There is the Incirlik Air Force Base in Turkey, distant from Iran (and plus Iran has good relations with Turkey).

There are also US troops in al-Ain in the Sunni Arab area of Iraq, where there is no Iranian presence. And some troops in Baghdad, which is really the only place in the region where they are in danger from Iran-allied forces, since there are some small Iraqi Shiite groups who do not want US troops in their country. Iran supports the Iraqi Shiite militias, but does not exercise control over them.

One of the lies National Security Adviser John Bolton and Secretary of state Mike Pompeo will tell you if you let them is that some little mortar attack on a US installation in Iraq by a cell of radical Iraqi Shiites was somehow orchestrated by the Iranian government.

So when you look at the geographical spread of US bases in the region, it is impossible to see any point where their security is enhanced by 1,500 troops. It is even hard to imagine how they could be practically deployed for force protection.

In fact, their stationing in the region may be routine. US troops are continually cycled in and out of Iraq. Qatar has offered to expand the US Air Force base at al-Udeid and is building dependent housing for the base so that US troops don’t have to live lonely outside Doha. For all we know the extra troops are just going there in the natural course of things.

Trump also seems to be using his manufactured crisis as a cover to sell more weapons to Saudi Arabia, which is using them to bomb Yemen back to the stone age. The 32 million Yemenis are Arabs, and although 1/3 are Zaydi Shiites, they aren’t Iran’s cat’s paws. Iran may have sent small amounts of aid or weaponry to the Houthi rebels in Yemen, but it is a minor affair.

And, of course, the real irony is that the US warmongers are depicting Iran as having an unfair advantage deriving from its geographical proximity to the Gulf and the Fertile Crescent. Iran has been in that area of the Middle East (and often ruled much of the Middle East) since the “Parsumash” people showed up in the 800s BC.

Quite unfairly, they put their country right next to where US bases are.