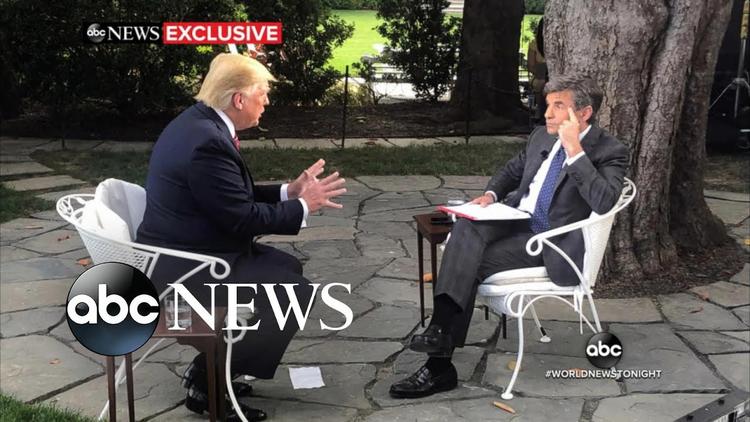 Ann Arbor (Informed Comment) – Trump revealed again on Wednesday that he has no legal or ethical compass. In an interview with ABC news Chief Anchor George Stephanopolous, Trump was asked if he would go to the FBI if a foreign government contacted him with dirt on his Democratic opponent or if he would accept the information and use it in the campaign. (See video at bottom of this page).

Trump began by being cautious, saying he would do “both.”

Some pundits are suggesting that Trump is becoming bold and more or less confessing to colluding with Putin against Hillary Clinton in 2016 because he smells fear on the Democrats and knows that Nancy Pelosi won’t impeach him.

I have a different theory. I think that Trump’s performance on ABC is a stealth advertisement. As he did in 2016, he is pleading for foreign governments to give him hacked dirt on the Democrat. Imagine his secret glee at sending the message all around the world via Disney’s ABC News, and for free.

The governments with substantial cyber espionage capabilities that desperately want Trump back in include the Russian Federation, the United Arab Emirates, Saudi Arabia, and Israel, just to name a few. They not only might be able to hack emails or dig up dirt, but there are also now, courtesy of Chief Justice John Roberts, many avenues for foreign black money to support the Trump campaign. Several of these countries are happy about Trump keeping oil sales strong by resisting green electrification. Russia believes Trump will let it have Syria all to itself and let it keep the Crimea. The Middle East countries fear that a Democrat will start back up the 2015 Iran deal, which integrates Iran into the world economy and potentially strengthens it.

So if these regimes were wondering whether they should bother, and whether Trump would even accept their information, they now have their answer.

As the interview went on, it quickly became apparent that Trump would not “do both,” that he wouldn’t think of going to the FBI, and that he would simply pocket the information and deploy it to win.

I say “became apparent” because he explicitly said so:

Trump: “I think you might want to listen, there isn’t anything wrong with listening. If somebody called from a country, Norway, [and said] ‘we have information on your opponent’ — oh, I think I’d want to hear it.”

Trump is known to slur his words so that “Russia” came out sounding like “Norway.” But that is all right– we knew what he meant.

Asked if he didn’t worry about foreign influence on an American election, Trump snapped,

“It’s not an interference, they have information — I think I’d take it.”

I think he would, too. And the answer is, no, he isn’t worried about foreign influence if it helps him.

What Trump called “oppo research” is the opposition research done on other candidates to discover their flaws.

Actually I think there are two kinds of oppo research, 1) the above-board search for chinks in the opponent’s armor, and 2) dirty tricks. Oppo research has a bad reputation because sometimes it slides into the latter.

Trump is not talking about either of these. He is talking about foreign espionage. Since information is a valuable commodity, it would fall under the prohibition in US law against a candidate receiving anything of value from a foreign government.

So it isn’t really oppo research at all, it is a kind of emolument or gift from an outside power seeking to curry favor.

“I’ll tell you what, I’ve seen a lot of things over my life. I don’t think in my whole life I’ve ever called the FBI. In my whole life. You don’t call the FBI. You throw somebody out of your office, you do whatever you do . . . Oh, give me a break – life doesn’t work that way.”

In the 2000 campaign, Al Gore discovered that someone had delivered George W. Bush’s briefing book for a debate to his campaign. He promptly turned it over to the FBI. It didn’t matter anyway. The American public doesn’t vote as intelligently as it buys peanut butter at the grocery. They decided that Gore, who wanted to get a better deal for workers and to jump in to prevent the climate crisis, was “stiff.” He said he’d protect their social security by putting it in a lockbox, and they fell off their chairs laughing at the word “lockbox.” They decided Bush would be a great guy to have a beer with. They didn’t realize they’d have to drink the beer in Iraq hunkered down in a bunker taking incoming mortars; or that inequality and carbon emissions would spike; or that around September of 2008 no one in America would have money to buy beer and people would be shunted out of their mortgages right into tent cities because Bush took the regulations off for his banker friends. Still, Bush wasn’t “stiff,” so there is that.

Stephanopoulos reminded Trump of the Gore precedent and said that FBI director Chris Wray (a Trump appointee) said recently that the call to the FBI “should happen” in case of such an offer from a foreign source.

Trump shouted at the shocked anchor, “The FBI director is wrong, because frankly it doesn’t happen like that in life!”

Well, it happens like that in Al Gore’s life. It doesn’t in Trumpworld.

Pundits were also speculating as to whether Trump’s frank admission that he would commit a crime of this sort would force Nancy Pelosi’s hand and finally lead her to initiate impeachment proceedings.

The answer is “no.” Moreover, he has already committed obstruction of justice a dozen times or so, which is much more serious than speculating what he might do in a hypothetical situation.

ABC News: “Trump says he may not alert FBI if info is offered by foreigners on 2020 candidates”