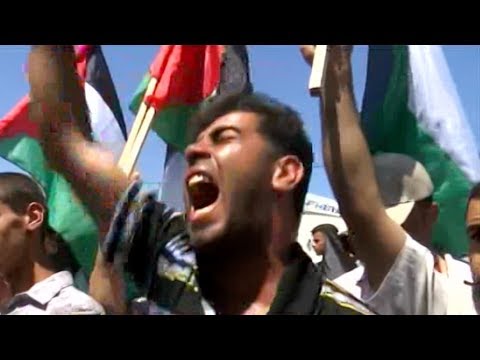 Donald Trump’s administration has recently shown great interest in Palestinians and their welfare. Even Jared Kushner, the US President’s son-in-law, has tried to spread optimism at the Manama workshop, presenting many ‘opportunities’ for the Palestinian people. Kushner has spoken to the participants as Wall Street speculators, reducing the Palestinian cause to promised returns and expected profit calculations, speaking of Palestinians in their absence.

In the workshop it held in the capital of Bahrain, Trump’s administration wanted to stir Palestinian feeling by talking about $50 billion. However, what it presented at the Manama workshop was very misleading slogans and inflated promises.

Away from the raised slogans, the Palestinian people will not enjoy this promised cake. A large piece of it will go to the countries in the region, which are supposed to accept this bribe in return for their consent to bury the Palestinian refugees’ right of return and to obey Israeli aspirations to settle them forever abroad.

Another piece of the cake will be devoured by private sector investments, though they will employ some Palestinians as workers on their projects, on their own land and give them a low wage. These projects will have direct or indirect gains on the Israeli economy itself.

Some of the money allocated to Palestinians will be in the form of loans with accumulating interest, which will complicate the Palestinian people’s dependence and affect the opportunities of future generations. The economic and financial grants to Palestinians will only be paid within 10 years, if they ever are truly fulfilled.

With some scrutiny, it is clear that what will be granted to Palestinians is at best less than a quarter of the amount that the Manama workshop boasts about, and that their annual share of its premiums is not far from what is basically allocated to them by international donors at the current time.

The Palestinian experience of international commitments is not good and even worse given that these promises were made by Trump’s administration. The international community had previously pledged generous funds, including $4.5 billion to rebuild what the Israeli army destroyed in the Gaza Strip in early 2009. The international community pledged the same after the Israeli campaign of destruction in the summer of 2014. However, Palestinians have continued to endure the suffocating siege and the effects of destruction and economic paralysis in the following five years. Only crumbs have reached them, and their living conditions have deteriorated further.

One does not have to be a genius to realise that Donald Trump’s administration is determined to undermine the Palestinian cause and sustain the occupation while maintaining the settlements it has spread over their land. The Palestinians have thus boycotted the Manama workshop and declared their discontent. They have also protested in the streets of Palestine to reject the workshop.

Senior Advisor to the President Jared Kushner (R) and US President Donald Trump at the White House in Washington DC, US on 1 October 2018 [Chip Somodevilla/Getty Images]

Palestinians did not exaggerate when they saw in this meeting an opportunity to market the Trump-Netanyahu project to undermine the Palestinian cause. The Manama workshop has tried to present false temptations to Palestinians under economic headlines, while surpassing the essence of the cause as if it were a mere issue of poverty and hunger.

Since early 2018 the Trump administration has exerted pressure on Palestinians to impoverish and starve them. This can be observed through the US administration’s campaign to harass the United Nations Relief and Works Agency, UNRWA, established by the international community to secure the minimum requirements of education, health care and food support for Palestine refugees. Washington decided to renege on its financial obligations to the agency, which caused the Agency’s services to decline sharply and undermined its operational capabilities. The Trump administration also exerted direct financial pressure on the Palestinian Authority, stipulating not to provide scheduled subsistence allowances for thousands of martyrs’ and prisoners’ families who had no breadwinners to provide for them.

At the same time, Netanyahu’s government started to deduct money from the revenues of tax and customs due to the Palestinian Authority, which contradicts the arrangements established under the Oslo agreement. On the ground, the occupation’s chronic policies of restricting Palestinian resources, confiscating their land, obstructing their movement in the West Bank, and imposing a prolonged siege on the Gaza Strip are creating heavy burdens and loss. Illegal settlers, however, enjoy privileges and economic and financial supply lines, offered by active organisations in the United States and Europe.

All in all, the Trump administration’s move in Manama seems to be an attempt to lure Palestinians through political bribery to give up the cause they have been defending for a century, forcing Gulf capitals to pay the benefits voluntarily or unwillingly. A false and unrealistic price was pushed forward in exchange for the Palestinians’ surrender, an expression used by the Israeli representative to the UN, Danny Danon, in his article published in the New York Times on 24 June, 2019, ahead of the beginning of Manama workshop entitled ” What’s Wrong With Palestinian Surrender?”

Palestinians have been offered to surrender to the reality of the occupation and settlements, which has left no chance for the establishment of a Palestinian state even by the Quartet’s standards. Trump’s administration has taken successive steps to further strengthen the presence of the occupation in Jerusalem, the West Bank and even in the Syrian Golan, putting an end to the two-state solution, which in essence was not a just solution to the Palestinian issue. It is also clear that the Trump-Netanyahu coalition is capable of imposing unprecedented dictates, amid the Arab world’s state of weakness and fragmentation and its rulers establishing their tyrannical regimes at any cost, even if they would sacrifice the Palestine cause.

“The Middle East problem can be solved economically” is an extraordinary discovery Kushner made, which previous US administrations failed to discover. This clearly reflects the tendency towards moving beyond the Palestinian cause in favour of further strengthening the occupation’s presence and the surrender of the Palestinian people.

It is a difficult moment for the Palestinian people, and it is clear that Trump’s administration is persistent with the threat and use of force against them if they don’t bow along with their Arab regional neighbours to these crude dictates. The mere insistence on holding a conference on the Palestinian people, despite all the Palestinian parties’ boycott, should ring alarm bells against the administration of Trump and its willingness to force the implementation of its project. If Palestinians are not willing to accept the poisoned candy offered, it would be said that it had rejected an unprecedented and generous offer and therefore has to bear the consequences.