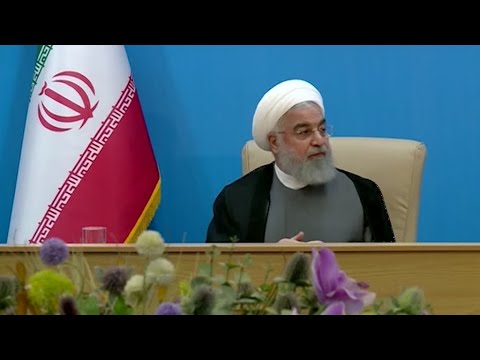 Ann Arbor (Informed Comment) – The New York Times and other Western news outlets reported on a speech of Iranian president Hassan Rouhani that expressed frustration with the US government in general and President Trump in particular, alleging that he called Trump “retarded.”

There has been a long history of mistranslation from Persian in US press and government circles, with the apparent attempt to make Iran look bad and ratchet up tensions between the two countries (as if that were really necessary).

It was alleged that former Iranian president Mahmoud Ahmadinejad had threatened to “wipe Israel off the map.” I demonstrated that Ahmadinejad was simply quoting an old speech by Ayatollah Ruhollah Khomeini (d. 1989), the founder of the Islamic Republic of Iran. In it, Khomeini had said that “the Occupation regime over Jerusalem will be vanish from the arena of time.” Vanish is intransitive in the Persian, contrary to what critics alleged to the New York Times. Ethan Bronner and Nazila Fathi did a fluff piece trying to justify the “wiped off the map” translation which in my view was dishonest. In any case, wishing the Occupation would go away eventually is not the same as rolling tanks, which “wipe of the face of the map” implies (there is no such idiom in Persian).

Although I made a good run at challenging the stupid wrong translation, the “wipe off the face of the map” rendering decisively won and became the tag line for all articles in English about Iran for many years. Only when Ahmadinejad’s star fell and he went out of office and his successors used less quirky language did the thing begin to go away (suspiciously coinciding the the advent of the Obama team in the White House, who weren’t interested in war with Iran.)

Rouhani did not say that Trump is “mentally retarded.” I’m not even sure if there is an exact Persian phrase that carries with it the connotations of “retarded,” which is in any case no longer a politically correct term in English, since challenged people are not retrograde, they are challenged.

In his speech, Rouhani objected to the financial sanctions placed by the US on Iran’s clerical Leader, Ali Khamenei. Khamenei as an ayatollah receives religious donations from all over the world– Pakistan, Afghanistan, India, Lebanon, Iraq, Canada, etc– which he then sends back out via agents to the poor. This would be like the US trying to stop Vatican charity.

Rouhani also said that the US White House was palpably agitated and frustrated these days, because nothing they did to Iran had any real effect. He said that the US elite imagined that after three months of severe sanctions and Iran’s inability to sell its oil abroad, the government would collapse.

Obviously, although its economy is hurting, Iran has not collapsed.

Rouhani also thought the US is so nervous that it overreacted to the shoot-down of what he characterized as a US spy drone by Iran. He said that in addition, “the White House is confronting mental illness (ma`luliyat-i dhihni).”

The phrase he used comes from medieval Arabic medicine. An `illah is an etiology or cause for a disease. Someone stricken with a symptom is `alil, i.e. sick. Some purists have argued that `alil, which signifies a person to whom something has been done, is more accurate than ma`luliyat, which has the marker of an abstract noun (like the English “-ness”) attached to a passive participle. But be that as it may, both `alil and ma`lul have come to mean “ill” in Persian, with these high-falutin’ Arabic words equivalent to the simpler Persian bimar.

Psychologists seem to be comfortable with a wide range of behaviors as relatively normal (even if somewhat pathological) as long as an individual “copes,” that is, gets up in the morning and does basic hygiene and goes to work and doesn’t not physically harm anyone. Trump seems to cope just fine, though it does appear that he is a serial rapist who has gotten away with his crimes because of his wealth and fame.

Not being in the mental health field myself, and just a lay person, I am not qualified to pronounce on Trump’s sanity in any technical sense. Nevertheless, just in a layperson’s inexact way and as a matter of opinion, I think the man is loony as the day is long.

And you can imagine how horrible it is for Iranians to watch Trump’s erratic antics and to find they don’t have money, because of Trump’s irrational malevolence, to buy medicine for their children.