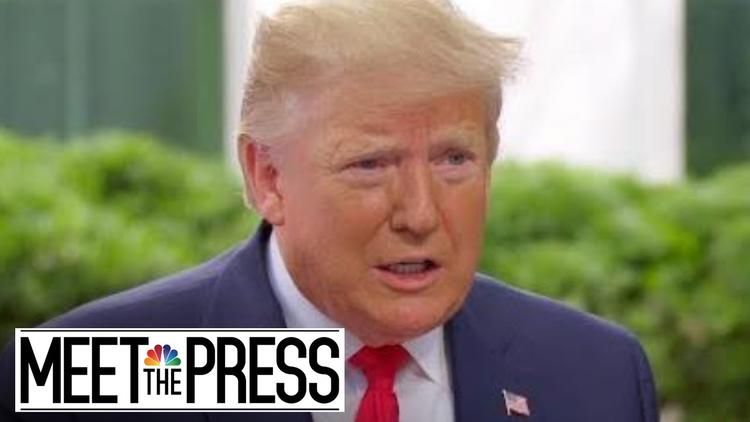 Trump in an interview Friday with Meet the Press attributed his decision not to go ahead with a strike on Iran to concerns about proportionality. He said he asked the Joint Chiefs of Staff just before the strike was to have been set in motion about the likely Iranian casualties. They estimated 150. He said that since the Iranian had shot down an unmanned drone, that death toll seemed to him not proportionate.

Trump To Chuck Todd On Iran Strikes: ‘No Planes Were In The Air’ | Meet The Press | NBC News

Trump can be criticized for a lot of things about this crisis– that he is the one who destroyed the 2015 nuclear deal that had reduced tensions with Iran; that he is the one who went around the world strong-arming countries not to buy Iranian oil, and threatening corporations like Total and Shell with billions in US fines if they dared deal with or invest in Iran. He is the one who backed the Iranian regime into a corner that gave space for militant elements to act out, even, apparently, against the wishes of senior Iranian officials. (Iran’s government is authoritarian but it is ramshackle and anything but an efficient dictatorship.) He is the one who played chicken by seeming to authorize a military strike and then abruptly canceling it. This is not a presidency, it is an Adam Sandler movie.

But, when he gets it right you also have to acknowledge that. Trump’s invocation of proportionate response is in accordance with the international law on war, with paragraphs of the UN Charter, to which the US is a signatory, and with rulings of the International Criminal Court (some of them, ironically, against the US government, as in its decision that the US under Reagan used disproportionate force against Sandinista Nicaragua).

“Under international law, states are obliged to refrain from threatening or using force against the territorial integrity or political independence of any other state in their international relations. This obligation is now recognized to constitute a principle of customary international law and is universally binding.11 Today the principle is codified in Article 2(4) of the Charter of the United Nations. As the principle does not affect the right of a state to maintain order within its own jurisdiction, nor to defend itself against unlawful attacks, it has been accepted − since the UN Charter was established − that there are three categories of ‘force’ which may be legitimate. These are: retorsions, reprisals and self-defence. Such force is employed in a horizontal manner, and it is interesting to observe that state practice and arbitration rendered them subject to the principle of proportionality.The principle of self-defence is not only an integral part of customary law, but is also stated in Article 51 of the UN Charter“:

‘Nothing in the present Charter shall impair the inherent right of individual or collective self-defence if an armed attack occurs against a Member of the United Nations, until the Security Council has taken measures necessary to maintain international peace and security. Measures taken by Members in the exercise of this right of self-defence shall be immediately reported to the Security Council and shall not in any way affect the authority and responsibility of the Security Council under the present Charter to take at any time such action as it deems necessary in order to maintain or restore international peace and security.’

“It constitutes the only explicit exception to the basic principle of refraining from the threat or use of force. In contrast to retorsion, which is an unfriendly, but nonetheless lawful measure, both reprisals and self-defence must fulfil certain preconditions to be legitimate. For self-defence these are ‘armed attack’ against a state; the core of, and limit to, the right are the concepts of necessity and proportionality. It is here that the principle finds its locus classicus and point of departure in international law. As outlined below it entered international law through the application by international tribunals of the principle of equity.”

We should not be under any illusion that Trump is actually committed to a principle of proportionate response. He is citing it because it suits his purposes today. In the past he talked about carpet-bombing ISIL, taking civilians captive to pressure their militant relatives, and raining fire and fury down on North Korea. Even in this interview, he threatened Iran with “obliteration,” which doesn’t sound very proportionate.

Here are some other examples of disproportionate force that don’t seem to bother Trump:

US and Afghanistan National Army troops are now killing more noncombatant civilians in the course of their operations than the Taliban.

In the past year in Gaza, the Israelis have wounded thousands of peaceful Palestinian protesters and killed hundreds by the dispropotionate practice of hitting them with concerted sniper fire.

The US aerial assault on ISIL in Mosul left 80% of the city in rubble.

Trump backs all of these violations of international law. So proportionality doesn’t seem to be a value for him. It is just something to trot out when you want to get off the hook.