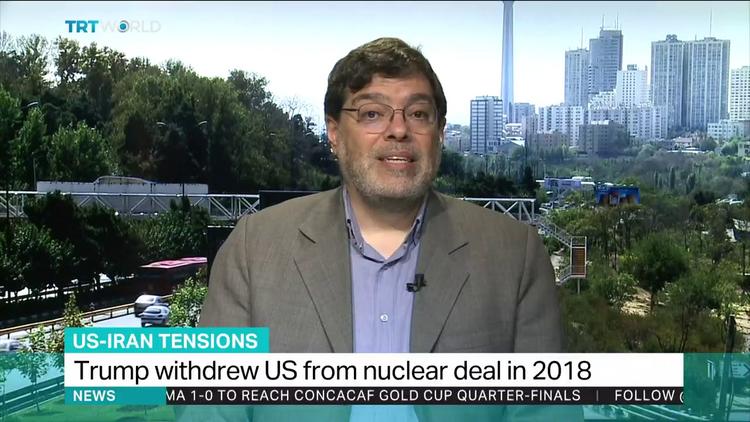 (Informed Comment) – In early May, on the anniversary of US withdrawal from the JCPOA, Iran announced that in view of US violations of the nuclear agreement and crippling sanctions that have been imposed on Iran preventing her from exporting the bulk of her oil, if European powers who were also signatories to the deal fail to activate their so called “Instrument in Support of Trade Exchanges” (INSTEX), providing Iran with some economic relief, by 27 June 2019 Iran would exceed some of the limits imposed on her by the deal.

Right on cue, the Economist published a lead article on 27 June entitled “How to Contain Iran”. It started with the assertion “It [Iran] is poised to breach the nuclear deal it signed with America and other powers in 2015”. On the same day, the New York Times published an editorial titled: “Iran Says It Will Pass a Uranium Cap. Is It a Threat? What Happens Next?” It called Iran’s decision “a potentially combustible new phase in the country’s confrontation with Washington.”

Various other leading publications have condemned Iran’s “breach” of the nuclear deal. The pusillanimous leaders of the three European countries that were part of the nuclear negotiations with Iran – the United Kingdom, France and Germany – have also criticised Iran for the “ultimatum” that it had allegedly issued, and called on her not to breach the terms of the deal.

In order to see whether Iran has breached her part of the deal or whether it has been the United States and the EU that have seriously breached the deal, it is necessary to briefly review the history of the nuclear deal or, to give it its full title, the Joint Comprehensive Plan of Action (JCPOA).

Furthermore, it was officially endorsed by the European Union (the EU) and embodied in a document published by the EU’s European External Action Service, titled “Joint Statement by EU High Representative Federica Mogherini and Iranian Foreign Minister Javad Zarif”. At the same time, the document was published by the U.S. Department of State titled “Parameters for a Joint Comprehensive Plan of Action Regarding the Islamic Republic of Iran’s Nuclear Program”. Above all, the agreement was given the force of international law by the Security Council Resolution 2231 that lifted all the sanctions on Iran.

At the time of the agreement, Iran had installed 19,000 centrifuges in two enrichment facilities in Natanz and Fordo, and had a stockpile of 10,000 kilograms of enriched uranium of 3.67% purity. Iran also had a heavy water reactor in Arak for producing plutonium.

Iran was also producing a small amount of uranium enriched to 19.5% in order to provide fuel for a small reactor in Tehran that produced radio isotopes for medical use. The reactor that had been built by the United States under the former Mohammad Reza Shah required uranium enriched to 19.5% as its fuel. Iran had been forced to produce the required fuel as the United States had refused to sell Iran the fuel and had also prevented other countries from doing so.

In keeping with the JCPOA, Iran halted its production of uranium enriched to 20 per cent, mothballed 80 percent of its uranium enrichment program and agreed to reduce her 10,000 kilograms of low enriched uranium to only 300 kilograms for 15 years. Iran also removed the core of the heavy water reactor in Arak and filled the channels with cement, rendering it inoperable. Iran also dismantled over 13,000 centrifuges, leaving the country with 6,104 primitive first-generation IR-1 machines, of which 5,104 are enriching uranium to 3.67 percent, and 1,044 machines at the Fordow site that will remain inoperative for 10 years.

Meanwhile, all of this was carried out under the strict supervision of the International Atomic Energy Agency (IAEA), which will also continue to closely monitor Iran’s future nuclear activities. So far, in 15 quarterly reports, the IAEA has certified that Iran has carried out all its obligations under the JCPOA.

Furthermore, Iran agreed to adhere to the Additional Protocol, which means unannounced inspections by IAEA inspectors of any nuclear site at the time of their choosing. So contrary to the false propaganda that the JCPOA has limited Iran’s dash to a bomb by a number of years, by accepting the Additional Protocol Iran has agreed to permanently give up any desire for nuclear weapons.

Prior to signing the JCPOA, it was alleged that Iran was three months away from producing enough enriched uranium for a single nuclear bomb if she wanted to follow that route (the so-called breakout period). This was despite the fact that Iran’s Clerical Leader Ayatollah Ali Khamenei has issued a fatwa saying that possession, storage or use of nuclear weapons is haram, or forbidden according to Islamic teachings.

However, as the result of the JCPOA, Iran is more than a year away from amassing enough uranium for making a single bomb, and she has to withdraw both from the Additional Protocol and the NPT in order to accumulate enough high-level enriched uranium. Therefore, the whole world would have plenty of time to know about it. Since 16 January 2016, the JCPOA Implementation Day, Iran has carried out its obligations under it.

Prior to the signing of the agreement, the Israelis alleged that Iran had carried out some research for military purposes, the so-called PMD or Possible Military Dimension. As a part of the inspections of all Iranian sites, including the military site in Parchin, the Director-General of the IAEA Yukiya Amano visited Parchin at the head of a group of inspectors, and after testing soil samples they certified that there had been no nuclear weapons activities at the site and there had been no diversion from the peaceful use of nuclear technology. It is important to stress all this in order to keep the recent Iranian decision in perspective.

As the negotiations were reaching their final stages, the Israeli Prime Minister Benjamin Netanyahu was invited by the Speaker of the House of Representatives to address the joint session of Congress and speak against a key policy of a sitting president. Netanyahu made a number of baseless allegations, and received 19 standing ovations, but the agreement between Iran and the international community continued.

Although Netanyahu failed to prevent the deal under President Obama, his supporters in Congress and in numerous pro-Israeli think tanks continued their campaign against the deal. During his election campaign, presidential candidate Donald Trump who received his biggest campaign donation from the fanatically pro-Israeli casino owner Sheldon Adelson, and other billionaire donors Paul Singer and Bernard Marcus, picked up Netanyahu’s slogans against the deal and called it “the worst deal in history”.

After achieving power, President Trump continued his anti-JCPOA campaign. Finally, on 8th May 2018 he ditched the deal, re-imposed sanctions and has been forcing other countries to cease any dealings with Iran too. As a result, not only has Iran lost some $130 billion in oil revenue, but its inflation has soared, Iranian currency has tanked, unemployment has increased, the economy has gone into recession and the sanctions are affecting the lives of millions of ordinary people. Even the importation of food and medicine, which are technically exempt from the sanctions, has been made impossible due to banking restrictions imposed on Iran.

This is despite the fact that as a signatory to the JCPOA, the United States had pledged to implement it in “good faith”. Section (viii) of the Preamble and General Provisions of JCPOA document reads: “The E3/EU+3 and Iran commit to implement this JCPOA in good faith and in a constructive atmosphere, based on mutual respect, and to refrain from any action inconsistent with the letter, spirit and intent of this JCPOA that would undermine its successful implementation. The E3/EU+3 will refrain from imposing discriminatory regulatory and procedural requirements in lieu of the sanctions and restrictive measures covered by this JCPOA”.

Under the JCPOA, Iran is required to cap its stock of low-enriched uranium at 300 kg of uranium hexafluoride enriched to 3.67 percent or its equivalent for 15 years, and is required to sell any excess amount. However, not only has the United States imposed illegal, extraterritorial sanctions on Iran, in contravention of the JCPOA it has even prevented other countries buying the small amount of enriched uranium that Iran produces. Therefore, on the first anniversary of U.S. withdrawal from the JCPOA, Iran announced that as it is not possible to export the small amount of excess uranium that it produces, by 27 June the amount produced would exceed the 300 kg of uranium hexafluoride that it is allowed to keep under the JCPOA.

On 17 June 2019, Iran’s Atomic Energy Organization spokesman Behrouz Kamalvandi said: “We have quadrupled the rate of enrichment (of uranium) and even increased it more recently, so that in 10 days it will bypass the 300 kg limit.” It is important to bear in mind that this is still low-enriched uranium to 3.67 percent.

By doing this, Iran wants to indicate that in view of the fact that the United States has violated the JCPOA for over a year, it also will violate some of its requirements. As it happens, the amount allowed has not yet been breached, but in any case we are still a long way away from enriching uranium to 19.5 percent which is still regarded as low-enriched uranium (20 percent and above is regarded as medium level) and further away from over 95 percent enrichment that is required for making a single bomb.

This by itself does not mean a major violation of the JCPOA, but is merely a symbolic gesture by which Iran wishes to put pressure on the EU to activate its transaction channel, the so called “Instrument in Support of Trade Exchanges” (INSTEX) that will allow companies to continue trading with Iran to a limited amount despite U.S. sanctions. That project has been talked about for over a year and still it has not been set up. Therefore, Iran wishes to pressurise Britain, France and Germany to get on with it.

Regardless of the fact that Iran’s decision to exceed the small amount of low-level enriched uranium does not pose any threat to the substance of the JCPOA, nevertheless, it is important to stress that the situation cannot continue as it is at the moment. If the EU wishes to prevent the breakdown of the JCPOA as it says it does, it should take some serious steps to ensure that Iran derives some economic benefits from it to which she is entitled. Iran’s decision should not make it harder for the Europeans to stay on board, but should spur them on to take some concrete steps.

In view of the current threats of war in the Persian Gulf, and U.S. demands of an effective surrender by the Islamic Republic of its nuclear programme, its regional policy, its relations with other regional states, and in fact its political and economic autonomy, it is incumbent upon other countries, especially the signatories to step up their efforts to save the deal. They should make it clear to President Trump that his threat of war on Iran, his genocidal comments such as “the official end of Iran” or “the obliteration of Iran” and his most recent statement that he does not need an exit strategy are not acceptable. They should realise that a war with Iran will not remain limited to Iran, but most probably will result in a conflagration in the entire Middle East.

In view of the impending dangers, I believe that it would be wiser for Iran to observe all the requirements of the JCPOA and not to exceed the limits set in it, so that it does not give the Trump administration an excuse to increase pressure on Iran. However, the real responsibility for the breakdown of the agreement and for a possible disastrous war in the region lies entirely with Trump.