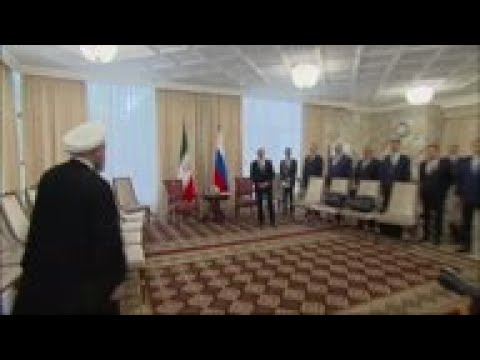 Reinstated sanctions on Iran have brought a new complexity to Tehran’s relations with those countries which supported the deal, especially Russia. A new reality has forced both countries to face tough decisions, testing the strength of their bilateral partnership. Many assume that Tehran, facing maximum pressure and isolation, does not have many options leftother than to embrace Moscow.High tensions, on the other hand, give the Kremlin the perfect opportunity to take advantage of Iran’s isolation and its limited manoeuvrability.

After the imposition of the new round of sanctions, Iran introduced the policy of “resistance” and has been trying to improve its commercial and economic ties with countries that oppose US policy. But so far, Iran’s diplomatic offensive has delivered no tangible results as most Iranian partners, including its leading oil customers, are afraid to go against Trump and his aggressive hawks and face punitive measures. This has left Iran with Russia as one of the last remaining partners that it can lean on.

In the last few years, both countries have intensified their bilateral commercial ties and expanded their military cooperation. Iran acquired the Russian air defence S-300 system and both countries have been closely collaborating in Syria, helping Assad to turn the tide of war and remain in power.

Most importantly, Iran counts on Russia’s support in the UN Security Council, as Russia would probably block any resolution aimed against Tehran. Sergey Sukhankin, a fellow at the Jamestown Foundation, observes that Iran under sanctions is a mixed blessing for Russia itself. On the one hand, if Iran remains isolated this is beneficial for Russia from an economic prospective; if regime change occurs Moscow might lose a lot from this. Moreover, the Kremlin is strategically interested in Iran standing against the US: “In case of hostilities between the US and Iran I do not rule out a possibility of Russia rending some support (intelligence change and/or delivery of anti-missile/aircraft complexes) to Tehran,” he told MEMO.

But the extent to which Iran can rely on Russia remains subject to heated debate. Russia cannot deliver what Iran desires most, since Russia’s capacity to back Iran’s economy are very limited. Besides, Moscow is not interested in going deeper into the US-Iran spat and worsening its already tense relations with Washington.

Despite many common interests, Russia and Iran are also competitors in many fields. Aside from competing at the global oil market, their competition is even more evident in Syria, where both sides are trying to materialise their support to the Assad government and benefit from the post-conflict reconstruction of the country. So, will Iran and Russia continue to cooperate in Syria once the war is over without stepping on each other’s toes?

Despite occasional turbulences, Stephen Blank from Jamestown Foundation believes that they will continue to seek to cooperate in Syria for as long as possible and prevent friction between them, which only weakens both sides. “Russia must have a partner in the Middle East and Iran needs Russian diplomatic support. They both have a common interest in reducing US power and capabilities there and that overrides any temporary ups and downs,” he told us.

Przemyslaw Osiewicz from the Middle East Institute in Washington D.C, and an associate professor at Adam Mickiewicz University in Poznan, explained to us that both Iran and Russia are marginalised in the international community and therefore need each other. Even if they stop supporting President Assad, “they will find a new Syrian leader whom they will back,” he added. Moreover, both of them are interested in the post-war reconstruction in Syria and finally, “both sides seem to understand that they cannot gain more than they already have in Syria.”

However, according to Sukhankin, it is not at all apparent that cooperation will have a long-lasting effect. Given the fact that both actors have interests of their own, though frequently diverging, he presumes that in the future, relationships might get sour. This, however, depends on other factors aside from Syria. He estimates that Russia’s relations with Turkey and Israel might become a key factor that could worsen bilateral ties between Iran and Russia. Russia is very interested in increasing ties with Tel Aviv through the EEU.

READ: Gulf ‘attacks’ on oil tankers are a cover for a bigger agenda

Moreover, according to the Russian expert Vladimir Frolov, Moscow is willing to play a notable mediation role between the US and Iran. In an article published by Russian media outlet Republic.ru, he said that at the announced trilateral meeting in Jerusalem between National Security Advisors of the US, Russia and Israel, Moscow is“prepared to take in consideration and promote American interests regarding expanding the Iranian deal in terms of setting limits on Iran with regards to its regional expansion and aggressive actions via ‘allies’”.

Iran was also not happy at all to see that Russia intends to raise its oil production at the expense of Iran’s sanctions. Finally, Iranians were highly disappointed with Russia’s decision not to activate its advanced air defence systems during Israeli air strikes on Iranian positions in Syria. But Sukhankin explains Russian behaviour through the fact that Kremlin’s current foreign policy in the Middle East is much more considerate, flexible, and less narrow-minded. Russia has learned the skill of coalition building, something that the USSR lacked in the past.

Nevertheless, he thinks that Iran could capitalise on Russia’s own predicaments in the Middle East, namely the need to keep a balance between main players such as Turkey, Israel, Hizballah, and the Palestinian Authority, which would be very difficult to do.

Although it is probably not the most desirable scenario from the Iranian point of view, Osiewicz observes that Tehran will be forced to respect Russia’s interests in the Middle East and elsewhere, for example, in Central Asia. As a consequence of the Trump administration’s decision to marginalise Iran and Russia both countries are therefore forced to cooperate and oppose the American strategy. Russia is, therefore, according to Osiewicz, probably the biggest winner of the reinstatement of US sanctions on Iran. But it is not the only one.

It is China that may well benefit the most. In this context, Sukhankin said that he would be therefore less preoccupied with Iran dancing exclusively to “Moscow’s tune” as he is more puzzled with “Beijing’s tune.” Blank noted that Russia is economically too crippled to gain much of an advantage from the situation. “By imposing sanctions, the US is pushing Middle Eastern countries (and to some extent, even Central Asia) right into Chinese hands. In fact, Beijing does not need to do much, just try to use the situation for its own benefit,” Sukhankin added. It is very likely that the imposition of sanctions would just significantly improve and strengthen the geostrategic positions of two main US competitors in the Middle East, Russia and China.