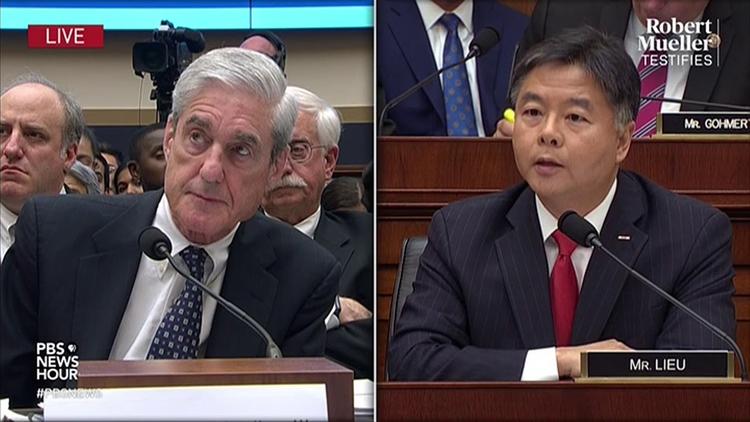 Trump keeps trying to hypnotize people by saying “No collusion, no obstruction,” and saying that Mueller exonerated him. Since so few Americans and so few in Congress will actually read the Mueller report, he thinks he can get away with the Big Lie.

Mueller explicitly denied yesterday that he had exonerated Trump. So that’s a Trump lie.

Although Rep. Ted Lieu (D-Ca) did not in fact elicit from Mueller, as Alex Ward at Vox showed an admission that he had decided on Trump’s guilt but did not indict, Lieu carefully walked Mueller through the report to establish fairly conclusively that Trump committed what any reasonable person, knowledgeable of the law, would conclude was obstruction of justice:

LIEU: Thank you, director Mueller, for you long history of service to our country including your service as a Marine where you earned a brown star with a V device.

LIEU: OK. I’d like to direct you to page 97 of Volume 2 of your report, and you wrote there on page 97, quote, “Sessions was being instructed to tell the special counsel to end the existing investigation into the president and his campaign,” unquote. That’s in the report, correct?

LIEU: That would be evidence of an obstructive act because it would naturally obstruct their investigation, correct?

LIEU: OK. Let’s turn now to the second element of the crime of obstruction of justice which requires a nexus to an official proceeding. Again, I’m going to direct you to page 97, the same page of Volume 2. And you wrote, quote, “by the time of the president’s initial one-on-one meeting with Lewandowski on June 19, 2017, the existence of a grand jury investigation supervised by the special counsel was public knowledge.” That’s in the report, correct?

LIEU: OK. I’d like to now turn to the final element of the crime of obstruction to justice. On that same page, page 97, do you see where there is the intent section on that page?

MUELLER: I do see that.

LIEU: All right. Would you be willing to read the first sentence?

MUELLER: And that was starting with…

MUELLER: Indicates that the president…

LIEU: If you read that first sentence, would you be willing to do that?

MUELLER: I’m happy to have you read it.

LIEU: OK. I will read it. You wrote, quote, “substantial evidence indicates that the president’s effort to have Sessions limit the scope of the special counsel’s investigation be featuring (ph) election interference was intended to prevent further investigative scrutiny of the president and his campaign’s conduct,” unquote. That’s in the report, correct?

MUELLER: That is in the report, and I rely what’s in the report to indicate what’s happened in the paragraphs that we’ve been discussing.

I believe any reasonable person looking at these facts could conclude that all three elements of the crime of obstruction of justice have been met. And I’d like to ask you the reason, again, that you did not indict Donald Trump is because of OLC opinion stating that you cannot indict a sitting president, correct?

MUELLER: That is correct.

LIEU: The fact that their orders by the president were not carried out, that is not a defense to obstruction of justice because a statute itself is quite dry. It says that as long as you endeavor or attempt to obstruct justice, that would also constitute a crime.

MUELLER: I’m not going to get into that at this juncture.

LIEU: OK. Thank you, and based on the evidence that we have heard today, I believe a reasonable person could conclude that at least three crimes of obstruction of justice by the president occurred. We’re going to hear about two additional crimes. That would be the witnessed hamperings of Michael Cohen and Paul Manafort, and I yield back.

MUELLER: Well, the only thing I want to add is that I’m going through the elements with you do not mean or does not mean that I subscribe to the — what you’re trying to prove through those elements.

Rep. Sheila Jackson’s (D-TX) questioning demonstrated underlined that obstruction can be committed even in non-criminal matters, for instance to avoid personal embarrassment.

As for collusion, what Mueller found was that there was insufficient evidence of criminal conspiracy, which is an actual Federal crime, to bring charges. He did not conclude that there was no criminal conspiracy, only that he could not prove one. Collusion is a much vaguer conception and is not a defined crime in the law. But Mueller did not rule out collusion, as WaPo’s Philip Bump points out.

In fact, since “collusion” is not a legal term of art, it seems obvious that there was collusion. As Rep. Adam Schiff (D-Ca.) elicited from Mueller, the Russians extensively interfered in the 2016 election, and the Trump campaign team actively welcomed this Russian interference in the election.

That would be a form of collusion.