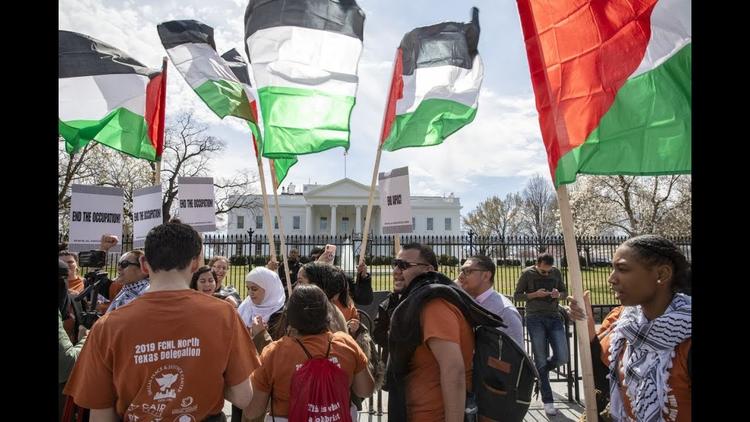 The House of Representatives on Thursday passed by a 398-17 margin a resolution condemning the Boycott, Divestment and Sanctions movement against Israel. In so doing, they weakened the US First Amendment of the Constitution, which forbids Congress to censor political speech. Americans don’t need the House’s permission to express their political opinions, and boycotting those who commit war crimes is political speech.

Supporters of Boycott, Divestment and Sanctions (BDS) on Israel are protesting the continued Israeli military occupation of the Palestinian West Bank, the illegal Israeli blockade on Palestinian civilians in Gaza, and the system of land theft and denial of basic human rights imposed by Israel, which has become a form of Apartheid or in American terms, Jim Crow.

They might also be protesting the formal Israeli government policy of shooting down unarmed protesters with snipers who gather on the Palestinian side of the Gaza border to protest the boycott and blockade that Israel has imposed on them. Israeli snipers have killed hundreds of these protesters in the past two years and wounded thousands, often maiming them for life. The Israeli boycott of Gaza means that the victims of these war crimes cannot get good medical treatment in Gaza; Israel often won’t let them be treated elsewhere, and so they lose limbs that might otherwise have been saved. The US press often mischaracterizes all this as “clashes” at the border, but extensive video and photographic evidence demonstrates that Israeli snipers are shooting down people who pose no danger to anyone, including sometimes medics, journalists, children, and unarmed women and men.

If any other country behaved this way, Congress itself would impose a boycott on it.

Embed from Getty Images
WASHINGTON, DC – MARCH 06: Sen. Marco Rubio (R-FL) (R) is interviewed by Claire Shipman during the American Israel Public Affairs Committee’s annual policy conference at the Washington Convention Center March 6, 2018 in Washington, DC. With thousands of delegates and attendees, the annual AIPAC conference is the the largest gathering of the pro-Israel movement in the United States. (Photo by Chip Somodevilla/Getty Images).

Why do senators want to pass a law to give impunity to a foreign government engaged in war crimes and racial discrimination, when the law has already been struck down by the judiciary as violating the very Constitution on which American liberties are founded, and to which these senators (apparently quite dishonestly) swore loyalty?

Moreover, this attempt to ban or punish boycotts is a stance of the Far Right and has an ugly history in the white nationalist backlash against the Civil Rights movement of the 1960s.

Supporters of Civil Rights for African-Americans put pressure on Woolworth’s and other companies to cease segregating their lunch counters by boycotting them. When the NAACP in Mississippi, led by Medgar Evers, led a boycott of Claiborne Hardware, white nationalists sued, alleging that advocating such boycotts illegally harmed the businesses.

If Congress had its way and could outlaw boycotts of all the causes and businesses dear to their campaign donors, American democracy would be in peril. Indeed, it is not clear that the Civil Rights movement could have ended Jim Crow discrimination against African-Americans if boycotts had been illegal.

Boycotts aren’t illegal, and we have Supreme Court cases to prove it. Of course, you can’t count on the Trump court to uphold such key civil rights precedents. But for the moment they are the law of the land.

[I]n 1968, Martin Luther King, Jr. was assassinated, and a young black man, Roosevelt Jackson was shot and killed by two Port Gibson police officers. On April 19, 1968, the field secretary of the NAACP for Mississippi, Charles Evers, led a march to the Claiborne County courthouse and demanded that the entire Port Jefferson police force be discharged When the demand was not met, the boycott on the merchants was [imposed]. On April 21, Evers made a speech in which he said, “If we catch any of you going into these racist stores, we’re going to break your damn neck. During the boycott, individuals known as “Black Hats” or “Deacons” stood outside stores to identify blacks who broke the boycottThe names of those who were identified were published in a black newspaper and the names were read aloud at NAACP meetings.[3] In at least 10 instances, blacks who violated the boycott experienced instances of violence, including shots fired into their homes, bricks thrown through their windshields, and tires on their cars slashed. Five of the incidents occurred in 1966, and were not correlated to Mr. Evers’ speech, and the other 5 were undated, and so they were discarded from the court case. . .

“On October 31, 1969, 17 of the merchants sued in the Chancery Court of Hinds County, 146 individuals, the NAACP, and Mississippi Action for Progress (MAP) in state court to recover losses caused by the boycott and to enjoin future boycott activity . . . A trial began in 1973 and, in 1976, the chancellor found that the black defendants were jointly and severally liable to the plaintiffs based on three separate theories: (1) for a tort of malicious interference with the plaintiff’s business; (2) for violation of a Mississippi statute banning secondary boycotts on the theory that the defendants’ primary dispute was with the governing authorities of Port Gibson and Claiborne County, and not with the white merchants at whom the boycott was directed; and (3) the court found a violation of Mississippi’s antitrust statute . . .

“In a decision by Justice Stevens, the Supreme Court reversed the Supreme Court of Mississippi’s decision, holding that the nonviolent elements of the petitioners’ activities were protected by the First Amendment to the Constitution of the United States and holding that the petitioners were not liable in damages for the consequences of their nonviolent, protected activity. This decisions means that “boycotts and related activities to bring about political, social and economic change are political speech, occupying “the highest rung of the hierarchy of First Amendment values.”

Unless Trump manages to so corrupt the Supreme Court that it ceases even trying to uphold the constitution, measures to forbid political boycotts will be struck down. The congresspersons know this. They are cynically playing for campaign donations from wealthy Evangelicals and from the Sheldon Adelsons. Even if they fail, they can tell the donors at least they tried.

They are selling the constitution for 30 pieces of silver.