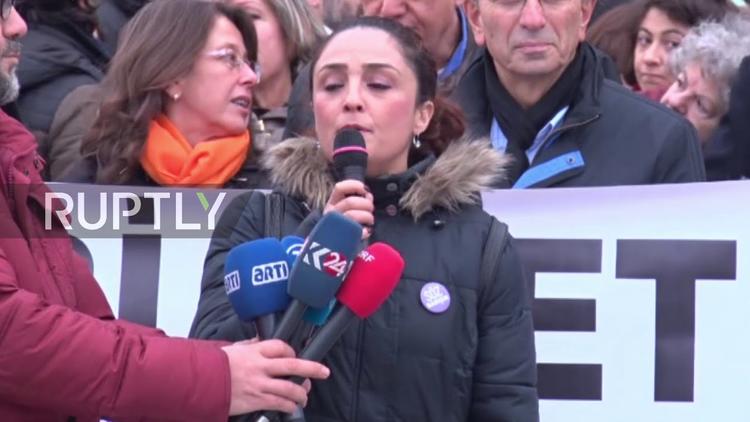 On January 2016, a small Turkish organization of activists, Academics for Peace (AfP) called the Turkish government to stop its violent assault against the Kurdish towns and areas of Eastern Turkey and return to peace negotiations with the Kurdish leadership towards resolving the prolonged conflict between the Turkish state and its Kurdish citizens. For the full story, see my essay, here (click).

The petition, signed by 2,000 Turkish academics from numerous universities both inside and outside of Turkey was titled: “We will not be a party to this crime.” This was a direct reference to the severe attacks being staged by Turkey’s army against the country’s Kurdish population as of July 2015. The initiators held a press conference publicizing the call and the petition after which its signatories became a target of harsh and continued state persecution. To date, hundreds of these academics have been arrested, interrogated, dismissed from their jobs, stripped of their pensions and/or passports, and tried in criminal courts. This piece is not an academic article.

Rather, it is my account of the still ongoing ordeal to which the Turkish state is subjecting the signatories of the peace petition, of the courageous civil struggle they are waging as individuals, and of their inspiring group solidarity. I discuss the context in which the activities of AfP have taken place and the specific steps taken by the Turkish regime against the academics who signed the AfP petition. I try to convey the solidarity practiced by the group of signatories in confronting their persecution.

My discussion focuses in particular on the criminal proceedings to which the signatories are being subjected. I try to make sense of decisions taken by the judges, drawing on my research of 19th-century Ottoman legal reforms that laid the foundations of Turkey’s modern judicial system. Within this context, the discussion raises questions about the disturbing use of the principle of “rule of law” in contemporary Turkey.

[Remember, for the whole story, see my essay, here (click).]

Iris Agmon completed her Ph.D. at the Hebrew University of Jerusalem in 1995. In 1997 she joined the (then) newly-established department of Middle East Studies at Ben Gurion University of the Negev as a faculty member. Her fields of research and teaching include socio-legal history of the Ottoman Empire and the passage of the Ottoman legal system to the colonial era, with particular interest in the Ottoman Sharia court system and legal reforms during the long 19th century; social history of late and post-Ottoman Palestine; family history; microhistory; historiography; historical thinking. In her book, Family and Court: Legal Culture and Modernity in Late Ottoman Palestine (Syracuse University Press, 2006) she focuses on the sharia courts of late-Ottoman Jaffa and Haifa. In her current research project, she explores the Ottoman Family Code (1917). Another aspect of her research is the daily work of the Ottoman and post-Ottoman sharia courts in Palestine during the First World War and the early colonial period.