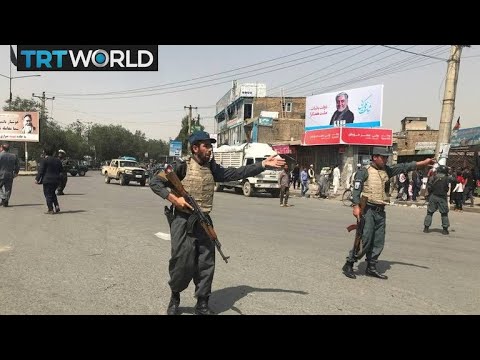 Afghanistan has long been touted as the “graveyard of empires.” The British and the Soviets certainly discovered that lesson to their great regret. Perhaps future historians will judge the failure of the United States to defeat the Taliban in Afghanistan over a two-decade period as a critical factor in the loss of American hegemony as well. If so, these historians will no doubt chuckle at the irony of Mr. Make America Great Again throwing the last shovelful of dirt on the grave.

After all, the Trump administration is working hard to negotiate a deal to end America’s longest military engagement. If the two sides can agree, Washington will withdraw nearly half of the contingent of 14,000 U.S. troops as long as the Taliban renounces al-Qaeda and similar groups, adheres to a ceasefire, and sits down with the Afghan government to discuss power-sharing.

So what if Trump wants a troop drawdown only so that he can tell voters that he is ending America’s “forever wars” before the 2020 election? Ending a war is ending a war.

As with the North Korea negotiations, however, U.S. critics are worried that Trump will make one-sided concessions in his eagerness to achieve the semblance of a foreign-policy win. In their worst-case scenario, the Taliban will use any ceasefire to press its advantages – on the ground and then politically – to overrun the country and reestablish their medieval rule.

Those concerns are premature, to say the least. The current deal doesn’t look anything like the end of the Vietnam War, for instance, when helicopters evacuated U.S. personnel from the rooftop of the U.S. embassy in Saigon as the North Vietnamese and the Viet Cong prepared to take over. If the preliminary details hold true, the United States would still keep 8,000-9,000 troops in Afghanistan, which is more or less the number of soldiers deployed there when Trump took office. So, “withdrawal” is something of a misnomer. Also, the U.S. military would likely continue to operate out of several bases, including Bagram, Kandahar, and several in and around Kabul, in order to preserve U.S. air power.

The United States continues to conduct drone strikes in Afghanistan. Indeed, a recent UN report indicates that these aerial attacks are largely responsible for the significant uptick in civilian casualties so far this year. The Trump administration no doubt wants to preserve its capacity to conduct such strikes so that, if the president changes his mind about seeking an end to the war, it can turn around and pound the Taliban from the air just like it did to the Islamic State.

Remember: Trump dropped the “mother of all bombs” – the most powerful conventional ordnance – in Afghanistan back in 2017. The president has a fondness for “fire and fury.” Trump said this week: “We could win Afghanistan in two days or three days or four days if we wanted. But I’m not looking to kill 10 million people.” He didn’t specify how many people he might be willing to kill in order to “win” in Afghanistan.

If Trump does follow through on his determination to at least reduce the U.S. military footprint in Afghanistan, he would be attempting to put out one fire even as he stokes several more. In fact, the president is pushing ahead with provocative moves on both the nuclear weapons and trade fronts that may have implications far greater than any deal currently on the table with the Taliban.

In a column this week in The New York Times, economist Paul Krugman compares the Trump administration’s trade conflicts to a classic quagmire, no different from the wars in Vietnam or Afghanistan.

Trump’s trade war is looking more and more like a classic policy quagmire. It’s not working — that is, it isn’t at all delivering the results Trump wants. But he’s even less willing than the average politician to admit to a mistake, so he keeps doing even more of what’s not working. And if you extrapolate based on that insight, the implications for the U.S. and world economies are starting to get pretty scary.

This week, the Trump administration imposed tariffs on Chinese imports to the United States worth approximately $300 billion. It also declared China to be a currency manipulator. The announcements led to a significant drop in the stock market, as investors worry that a trade war between Washington and Beijing could precipitate a global economic downturn.

Although investors were reportedly “blindsided” by Trump’s move, they shouldn’t have been. The president has been threatening to impose these additional tariffs for some months. And late in July, the administration upped the pressure on the World Trade Organization to remove China’s “developing nation” status. Meanwhile, as I explained in a cover story for The Nation a couple months back, the consensus of opinion among China experts in the United States now favors a more aggressive response to Beijing, which provides Trump with elite cover for his moves.

While Wall Street worries, Main Street braces for the impact of the new policies. U.S. farmers will suffer in particular, and none more so than the soybean growers who have relied on Chinese purchases for over $11 billion in revenues annually. Last year, Chinese soybean purchases dropped by an astonishing 75 percent. The Trump administration has promised billions of dollars more in bailouts to keep American farmers afloat (more to the point: to secure the farm vote for the 2020 elections). But temporary government subsidies are not going to cut it if the trade war becomes semi-permanent as China switches to other suppliers for its agricultural and manufacturing needs.

It’s not just farmers and manufacturers who pay. Ordinary consumers will have to pony up more at the checkout counter. This is, in effect, a hidden tax on Americans that they’ll invariably blame on China and other countries rather than on the Trump administration.

China is not the Taliban. It won’t be cowed by Trump’s rhetoric or his aggressive trade moves. Beijing allowed its currency to plummet in order to make its exports more competitive, which will squeeze U.S. products out of foreign markets. It’s digging in for the long haul, and it has the resources to do so. The Chinese government has many more levers at its disposal to adjust monetary and fiscal policy to weather this storm. And unlike Trump, Xi Jinping doesn’t have to worry that he’ll be voted out of office.

As Krugman explains, the tariffs are not even accomplishing Trump’s goals. The trade deficit is growing larger, and U.S. exports are actually shrinking. Tariffs are probably the worst possible tactic for boosting U.S. trade and addressing ongoing disagreements with Beijing. Not only are they ineffective in the short term, they have the potential to drag the global economy into a depression much deeper than the financial crisis of 2008.

The Obama administration negotiated a nuclear deal with Iran in 2015. It pushed through the New START treaty with Russia in 2010 (though, to get the treaty through the Senate, the administration had to commit to an expensive and entirely unnecessary modernization of the U.S. nuclear arsenal). And Obama was the first president to embrace the goal of complete nuclear disarmament (as opposed to mere arms control).

Trump, by contrast, seems to have fallen in love with nuclear weapons. He has pushed for an increase in the nuclear weapons budget that will mean an additional $100 billion over the next 10 years over and above what the Obama administration had planned. He plans to test some new nuclear-capable missiles, including a low-yield submarine-launched ballistic missile a new nuclear submarine-launched cruise missile.

But the most dangerous development is the U.S. withdrawal from the Intermediate Nuclear Force treaty, which the administration finalized last week. I described this projected development a couple months ago, but I probably underestimated the potential negative consequences.

Russian President Vladimir Putin has declared that his country is prepared to go head-to-head with the United States in a new nuclear arms race. Now that the INF restrictions have disappeared, Putin has pledged to build short-range and intermediate-range nuclear missiles to match anything Trump develops.

At the same time, the U.S. insistence on missile defense has pushed Russia and China in particular to develop measures to bypass this so-called shield in order to preserve their deterrent capabilities. As Alex Wellerstein writes in Quartz:

The US military is well-aware of these foreign developments and is somewhat giddy at the prospect of funding its own projects to “keep up” with them, even though they’re the cause for race in the first place. But it’s not just about legit defense: The tit-for-tat nature of this kind of technological development means new toys, more tax-payer money, and—importantly—more prestige.

As part of this escalation, the Trump administration is committed to developing more “usable” nuclear weapons – which of course increases the risk of a conventional conflict turning into a devastating nuclear exchange.

The Trump administration favors a war of all against all. That’s obvious from its response to the mass shootings in the United States. Rather than support gun control measures, the administration has backed the NRA line: more guns for teachers in schools, more guns for the average person to take out the “bad guys” on the street, more military-grade firepower for local police.

Similarly, the Trump administration has come out shooting in trade relations, most disastrously with China but also with allies like Canada and Mexico. And it has reopened an arms race around nuclear weapons that should have been shut down once and for all at the end of the Cold War. These policies threaten to drag the United States and the world backward: to the heyday of U.S.-Soviet rivalry in the first case and to the days of tariff escalation of the 1920s in the second. If only one of these happens, it will be a disaster. If both happen, it will be a catastrophe.

Ending the war in Afghanistan is indeed a noble goal. But even if does happen, it would qualify as only a minor accomplishment in comparison to the escalating trade war and the new nuclear arms race. It would be like putting out a little brushfire in your backyard when a massive forest fire approaches from the other direction. And given the terms of the latest deal on the table, the brushfire will continue to burn, though perhaps at a less dangerous level.

Meanwhile, even if you can’t actually see the forest fire approaching, you can at least smell the smoke and hear the distant crackle of flames. It’s an entirely avoidable conflagration. The president who claims to be saving the United States is out there patrolling the firebreak, but with lighter fluid in hand.