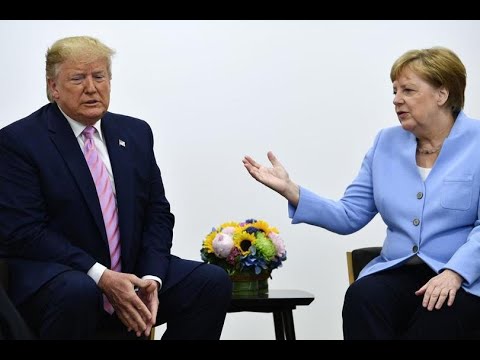 Ann Arbor (Informed Comment) – The government of Angela Merkel in Germany has rejected participation in the the Trump administration’s naval mission, “Operation Sentinel,” aimed at securing the Straits of Hormuz from Iranian interference in shipping. German foreign minister Heiko Maas of the Social Democratic Party said that Berlin opposes the Trump policy of “maximum pressure” on Iran.

France’s President Macron has also rejected participation in a US-led naval operation in the Gulf, suspicious of Trump’s aggressive policies toward Iran.

The Iranian government is suspected of a string of acts of sabotage and more recently the impounding of British-flagged tankers in the Gulf, in revenge for the US financial blockade on Iranian oil exports and for the impounding of an Iranian tanker by the British at Gibraltar.

The German government is determined not to be drawn by the Trump war hawks such as national security adviser John Bolton and secretary of state Mike Pompeo into a military confrontation with Iran. Indeed, Germany is still trying to salvage the 2015 Iran deal mothballing most of Iran’s civilian nuclear enrichment program. Moreover, Berlin has had the opportunity to see the way in which Bolton hoodwinked Britain into detaining the Iranian tanker at Gibraltar (a questionable act under international law since there is no UN Security Council ban on Iranian shipping). The Germans are determined not to be reduced to lackeys of Trump as they see the British having been.

Although German Chancellor Angela Merkel deeply dislikes Donald and has expressed her support for the minority congresswomen of the Squad whom Trump attacked with racist gibes, her government’s decision is not a matter of pique. As Der Spiegel notes, Germany is the world’s fourth largest economy and its business classes have their own interests in the Gulf, through which about a fourth of the world’s petroleum flows every day.

The Association of German Shipowners says that 20 to 30 German vessels pass through the Straits of Hormuz daily. Der Spiegel quotes the German financial and economic newspaper “Handelsblatt” as observing that no German ship is benefited by getting caught in the middle of a US-Iran conflict in the Gulf. That is, German big business, to which Merkel is close, likely pressured the German government to stay away from Trump’s navy. The paper admits that German big business would in contrast not be opposed to a solely European naval observer mission in the Gulf. A European observer mission has been championed by a close ally of Merkel’s, Norbert Röttgen, as well.

In short, Trump’s warmongers have made the US navy toxic for our NATO allies because they see Operation Sentinel as a Trojan Horse tactic, letting the warmongers into the heart of Europe.

In other news, Secretary of State Mike Pompeo pettily placed his counterpart, Mohammad Javad Zarif, under US financial sanctions. France’s Les echos noted that Pompeo had been calling for talks with Iran, so that sanctioning the one who would do the talking “is so confused as to be completely inscrutable.” One German newspaper cheekily observed that Zarif is now reduced to using the Instex exchange mechanism set up between Europe and Iran to sidestep US Treasury Department strong-arming.

The signal being sent here by Bolton and Pompeo (Bolpeo? Pomton?) is that no one willing to talk to the West will be allowed to, forcing the hard liners to the fore, since the hard liners are easier to set up as comic book villains, so as to rush everyone into a war against Iran.

Germany, at least, understands exactly what is going on, and if Berlin can’t stop it, at least refuses to be part of a plot to stage a war of aggression. Germany remembers the crime it itself committed in Poland in 1939, even if Americans seem to have forgotten it, starting with the Bush war of aggression on Iraq in 2003. That was another one Germany sat out.

Ironically, it was in Poland that German Foreign Minister Heiko Maas made the announcement that Germany would reject participation in the American Gulf force.

Germany knows fascism when it sees it.

Hindustan Times: “Amid Iran tension, Germany opts out of US plan to secure Strait of Hormuz”