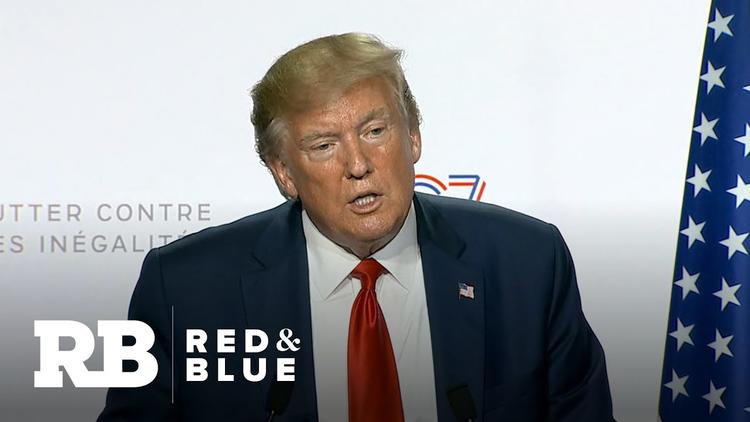 Ann Arbor (Informed Comment) – Fars News Agency reports that on Monday morning in the wake of Iranian foreign minister Javad Zarif’s meeting with his French counterpart on the sidelines of the G7 summit in Biarritz, Iranian president Hassan Rouhani remarked:

“I believe that for the national benefit of our country, one must take advantage of every opening. If I know that if I were to go to a session and meet someone, my nation would flourish and the problems of the people would be resolved, I would not hesitate.”

If Rouhani was saying what he seemed to be saying, it is a major change in stance, since he had earlier said you would have to have your head examined if you were willing to meet with the Americans. He meant that Iran had spent two years negotiating the Joint Comprehensive Plan of Action (JCPOA) with the permanent members of the UN Security Council plus Germany, and the treaty was signed. Iran consistently did everything asked of it in the treaty, mothballing 80% of its civilian nuclear enrichment program, in return for which Tehran was supposed to receive sanctions relief. European and UN sanctions were taken off, but then Trump breached the treaty and slapped on Iran one of the severest economic sanctions regime ever imposed on any country, profoundly hurting its economy. So since the US didn’t abide by its treaty commitments the first time, Rouhani was asking, why would you ever expect it to.

The about-face is certainly a result of the diplomatic overtures of French President Emannuel Macron, who is trying incrementally to begin resolving the crisis between the Trump administration and Iran. Macron wants Iran to revoke its decision to begin violating some minor provisions of the JCPOA as a protest against Trump’s “maximum pressure,” in return for which the French president hopes to convince Washington to reduce the severity of its sanctions.

Trump’s war hawks, national security adviser John Bolton and secretary of state Mike Pompeo would no doubt be completely opposed to such a meeting, but Trump himself seems intrigued.

Trump said Monday as the G7 summit wrapped up that “there’s a really good chance” that he would meet with Rouhani sometime this year. He also tried to reassure Iran that he was not interested in overthrowing their government. I’m not sure if he knows about the 1953 CIA coup against the then democratic Iranian government, but he went on to say that the US had tried that before and it doesn’t work. If you talk enough, you’re bound occasionally to get something right.

Trump is always thinking about things that might help him pump up his base and get reelected. He wanted to get out of Syria before the midterms last year to create enthusiasm among his base, and only a full court press by the whole Washington establishment dissuaded him. He clearly thinks about withdrawing from Afghanistan in the same terms. He has noticed that the white working class is tired of wasting trillions on Middle East wars, and he has tread carefully, despite his bluster, about directly attacking Iran. He may calculate that a North Korea style rapprochement with Tehran that would allow him to underline his ability to get out of the Middle East entirely would help him in the polls.

If his North Korea negotiations are any indication, Iran would not actually have to do more than go back to complete observance of the JCPOA after talking to Trump to begin seeing some sanctions relief from the US, as long as they renamed the JCPOA “the Trump Accord,” threw in a couple minor concessions, reaffirmed (as they have since 2003) that they will never have nuclear weapons, and said what a swell guy Trump is. (I hate to do this sort of facetious analysis of an issue so dark and deadly, but that’s the hand dealt me by the US electorate.)

One obstacle here might be Iran’s clerical Leader, Ali Khamenei, who is more ideological and less pragmatic than Kim Jong Un. Even Khamenei, however, may be worried about the survival of the regime if the US maximum pressure continues (oil sales have plummeted), and he may figure he can blame Rouhani for being a dupe if things don’t work out. Rouhani is a lame duck anyway.