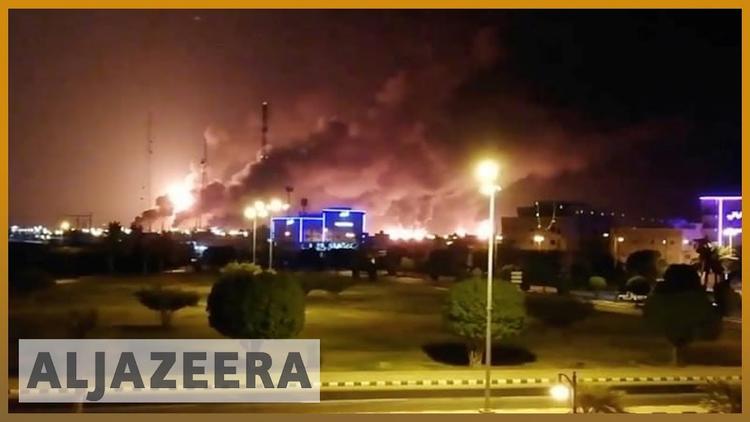 The way you phrase it sounds like you are waiting for the Saudis to tell you what to do. https://t.co/CdSSb9ws9m

Trump actually said that he was waiting on the Saudis to determine the guilty party and to tell him what to do!

We all kept saying it is dangerous to have an erratic person like Trump in the White House in case there was a major global crisis. This might be it, folks.

[Update: Louisa Loveluck is reporting that Pompeo is now denying an Iraqi provenance; he also cast doubt on Yemen, so perhaps has adopted the Iran theory.]

One anonymous Trump official even told ABC on Sunday that Iran directly launched drones and cruise missiles on Saudi Arabia. We await forensics, but this allegation should be provable from forensics. It hasn’t been, and sounds Gulf of Tonkinish to me. If it is true, buy an electric car quick.

One of the arguments for the Iraqi or Iranian provenance of the drones is that the Houthis were not known to have this capability before now. This allegation is not true. As I discussed in May, the Houthis used drones to hit Aramco pumping stations in al-Duwadimi (853 miles from Sana’a) and Afif (764 miles from Sana’a). The Houthis only had to go another hundred miles or so to reach Abqaiq from their stronghold at Saada (about 1,000 miles).

In May, the Houthis must have used Iran’s Shahed 129 UAV (unmanned aerial vehicle) or something very like it, which has a range of 1100 miles and has been used for similar strikes by Iranian forces in Syria. The advantage of drones for smuggling weapons to the Houthis by Iran is that they could simply be flown to them from a vessel offshore in the Red Sea.

If the drone can go 1,100 miles, there is no advantage to taking off from Iraq or Iran rather than Yemen.

In murder mysteries we look at means, motive and opportunity. The Houthis have the most motive of any of these actors, since the Saudis have dropped thousands of bombs on them for nearly four and a half years. Moreover, the Houthis have nothing to lose. They are already being hit as hard by the Saudis as they can be hit, and they have no resources that the Saudis can destroy.

In contrast, the Iraqi Shiite militias may not like the Saudis one little bit, but they don’t have anywhere near the same degree of motive as the Houthis. Moreover, they benefit mightily from Iraq’s oil facilities at Basra, which you wouldn’t think they would want to put at risk of a Saudi counter-strike.

For the same reason, Iran would have been foolish to plan or direct this attack, since its own oil facilities are vulnerable to a counter-attack. Neither Iran nor Iraq did this kind of damage to one another’s oil facilities in the Iran-Iraq war of 1980-88, operating under a constraint of mutual assured destruction.

Finally, I think we should be suspicious of Israeli and Neoconservative intelligence on this matter. Israel has not been involved in the Yemen War and there is no advantage to it if the Houthis did it. Israel has developed a fear of the Iraqi Shiite militias, which are close to Iran and operating in Syria near Israel, and has struck them in Iraq several times with drones. It would be awfully convenient for Tel Aviv if the full force of the United States and the Saudis could be turned on the Iraqi Shiite militias, and even better if it could be turned on Iran itself.

Look, I’m no hardware expert and it is all the same to me whether the drones were launched from Basra or from Saada, so I have an open mind. But the argument that the Houthis absolutely couldn’t have done it makes no sense to me as a layperson, given the recent al-Duwadimi operation.

In the meantime, we Americans apparently must wait patiently for our marching orders from Riyadh. Or maybe, you know, the Saudis will bankrupt Trump by ceasing to rent all those rooms in the Trump Tower from him.