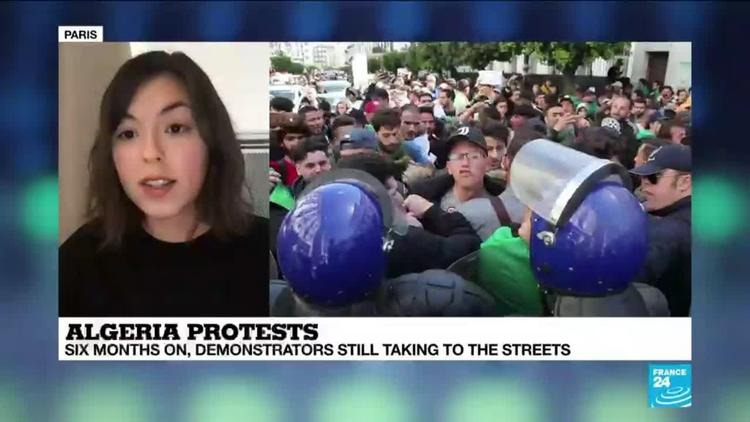 (Al-Bab.com) – Last Friday, for the 29th week in succession, demonstrators took to the streets of Algiers. It’s now five months since they achieved their initial goal – triggering the resignation of President Abdelaziz Bouteflika after more than 20 years in power – but their demands go far beyond that. They want a complete overhaul of the political system. In particular, they want to dismantle Le Pouvoir – the corrupt network of political, military and business elites that has ruled Algeria for decades.

Following Bouteflika’s resignation the president of the upper house of parliament, Abdelkader Bensalah, became acting head of state, as specified in the constitution. Under the rules, this arrangement was supposed to last for no more than 90 days, to allow time for organising a presidential election.

The election had been scheduled for 4 July but early in June, in the face of objections from protesters, the Constitutional Council decided to cancel it. Paradoxically, cancellation was seen as a victory the protesters, who argued that if the election went ahead it would not be free and fair, and would simply bring another representative of the old regime to power.

Algeria in transition: background on the protests

The result is that Algeria is now in a political and constitutional limbo. While the protesters continue holding out for fear the regime may just reorganise itself and return to its old ways after a change of faces, there are signs that the authorities are losing patience.

Last week the powerful army chief, 79-year-old Gaïd Salah, called for a decision by 15 September on the holding of a presidential election. In effect, this would set the clock running for a 90-day period leading up to polls in mid-December.

On Sunday, the National Forum for Dialogue and Mediation – a panel appointed by Bensalah last July – submitted its report. According to the Tout sur l’Algérie website (TSA), the report made four key points. It called for …

1. Holding a presidential election in “the shortest possible time” and in line with “the constitutional framework”, while ensuring transparency, probity and neutrality.

2. Creating a “positive” climate of trust between the government and the people ahead of the election – for example through the release of detainees and safeguarding businesses whose bosses are facing prosecution, in order to protect jobs.

4. The creation of a National Authority for Elections comprising representatives of the different components of society.

On this last point, TSA reports that Bensalah has now asked the mediation panel’s coordinator, Karim Younes, to “conduct the necessary consultations to train and install” the new electoral authority.

It’s doubtful whether these steps will allay the protesters’ suspicions of a trap. On the other hand, if the political uncertainty continues much longer there’s a risk that the military could step in.

On Sunday, in what might be an ominous move, Bensalah reshuffled security chiefs in 40 of the country’s 48 administrative districts. Commenting on Twitter, Zine Labidine Ghebouli (@GheZinou) said the only reason for making such changes now is to avoid opposition within the security services “in case there is an order to firmly oppress protesters”.

So far the authorities have not tried to crush the protests by force but they have recently become less tolerant of them and, in the words of a new report from Human Rights Watch, have been “tightening the screws”.

“The authorities have arrested people for peacefully carrying a flag or a protest sign,” the report says. “They jailed a veteran of the independence war for criticising the army, shut down meetings by political and other nongovernmental groups, and blocked a major news website.

“While large street protests have continued every Friday, police forces have deployed massively in Algiers’ central streets and squares and at checkpoints, effectively limiting the number of people who can reach the march, and then tightly controlling those who do.”

According to the report, the authorities have made a point of targeting protesters carrying Amazigh flags – the symbol of the large Berber community.

Human Rights Watch says waving a flag of an ethnic community is an act of peaceful expression protected by the International Covenant on Civil and Political Rights, which Algeria ratified in 1989, and the African Charter on Human and Peoples’ Rights.

The authorities, however, see Amazigh flag-waving as “harming the integrity of the national territory” – a crime which carries sentences of up to 10 years in prison, under Article 79 of the penal code.

France24 English from late August: “Algerian protests: “We want the refoundation of a democratic Algeria””