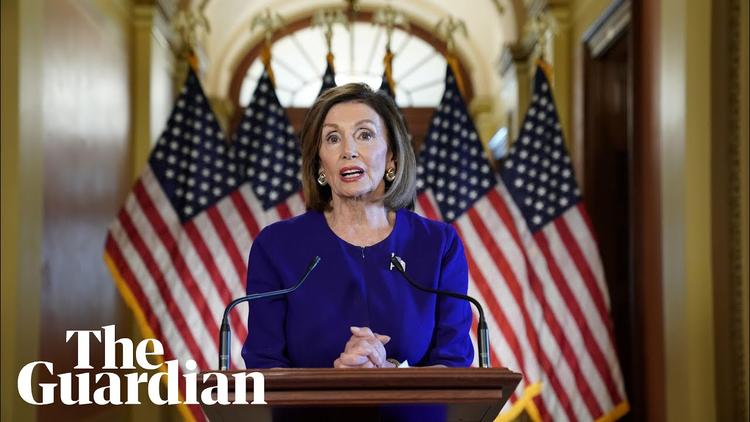 Ann Arbor (Informed Comment) – Nancy Pelosi finally caved to pressure to open an impeachment inquiry into Trump, after he admitted to having pressured the Ukraine government to investigate his Democratic rival Joe Biden.

Biden is clearly furious over the whole thing, and as a pillar of the Democratic establishment and former president of the Senate (as vice president), he was in a position to pressure Pelosi to do something. I don’t have any proof that he did, it is just obvious that Pelosi changed her mind abruptly on the i-word, and it seems to me likely it was because she got severe pressure from her own peers. She is not a democrat with a small ‘d’ and doesn’t care what most of us think. Her explanation that this Ukraine scandal is something that ordinary Americans can understand, and so is finally an electoral platform of which she is confident, does not make sense to me. Bribing Stormy Daniels was a perfectly understandable interference in the 2016 election and Bill Clinton was impeached for much, much, much less.

The other thing that may have changed Pelosi’s mind is that the Ukraine scandal hits Trump in his faux patriotism, and it will be hard for Republicans to defend him from a charge of actively seeking foreign interference in a US election, a charge that Trump has already more or less admitted to. Since Republicans beat the patriotism drum so loud (despite most of them being globalists), hitting Trump in that meme is genius.

Finally, a formal impeachment inquiry will reinforce congressional subpoena powers and likely will sway the courts to make quicker rulings and to give the House some latitude. It will much strengthen Congress against Trump’s stonewalling and that of his officials.

Pelosi is said to want to ensure that the Democrats keep their House majority, gained in 2018, and retain a shot at the Senate, and she is protective of Dems elected from conservative districts that until recently were Republican strongholds. She also has to be worried about Pennsylvania, Michigan, Ohio, Wisconsin and Minnesota. If the Democrats win them, they win the presidency. If Trump wins them, the gets another four calamitous years. She hadn’t wanted to do anything to fire up Trump’s base (which includes a lot of people who didn’t vote much before 2016 and who might have lost some of their enthusiasm for the Great Orange Hope).

If this was the analysis, I think it was remarkably timid. First of all, there is not evidence that Trump is widely popular or that trying to impeach him would backfire.

In fact, a recent poll found that almost 70 percent of Americans personally dislike Trump. %51% dislike both him and his policies, and 19% dislike him even though they agree with his policies.

In fall of 2008 John McCain was consulting George W. Bush about his disastrous presidential campaign, and Bush shook his head. “That looks to me like a seven-spiral crash,” he is said to have replied.

Take Michigan. In January of 2017 when he was inaugurated, Trump had 48% approval, versus 40 percent disapproval.

By this summer, 52% of Michiganders disapproved of him and only 40% approved. The Trump camp is beginning to write off another victory in Michigan as impossible. Trump barely won Michigan, largely because Hillary Clinton took it for granted, but also because of a fall-off in the African-American vote compared to the Obama years and because 14% of white blue-collar workers who had voted Obama switched to Trump. His appeal to the workers was a pledge to bring back the good-paying factory jobs, which he has not done. As for African-Americans, his approval among Black women is at 3%.

Throughout the summer, according to FiveThirtyEight.com, Trump lost badly to the leading Democratic contenders, though his numbers firmed up in September; my suspicion is that September is an outlier having to do with foreign affairs crises, and his bump will be deflated. In Wisconsin we don’t see the same effect, and Trump is still down.

Look at the map at Tracking Trump. It isn’t a winning map for him.

He is at 53-44 disapproval in Pennsylvania after having been positive in the beginning of his regime.

And, the 51-55% disapproval rates in those states would not be so high unless substantial numbers of independents and Republicans joined in the disgust.

Joe Scarborough made the correct observation that because so many of us were blindsided by the fluke in November of 2016, we all became timid about making judgments on the basis of the evidence before our eyes. But that is silly. Presidential candidates don’t get reelected with these sorts of polling numbers a year out.

Maybe this sort of thing had infected Pelosi’s thinking. But the idea that a Trump impeached would be stronger, given his fall in the ratings in key states, just strikes me as daft.

In politics, a year is forever and as unlikely as it seems there are developments that could give Trump a bump in the polls between now and then. Bush was widely thought a buffoon before 9/11 and then by fall of 2008 was again thought a buffoon. But barring a major such game-changer (God forbid), Trump seems doomed.

Impeaching him isn’t the game-changer.

As for the impact on the House and Senate, I very much doubt that impeaching Trump will affect races in conservative districts one way or another. But if the House does impeach and the Republican senate goes to bat for Trump, it is entirely possible that the Democratic base will be outraged and energized.