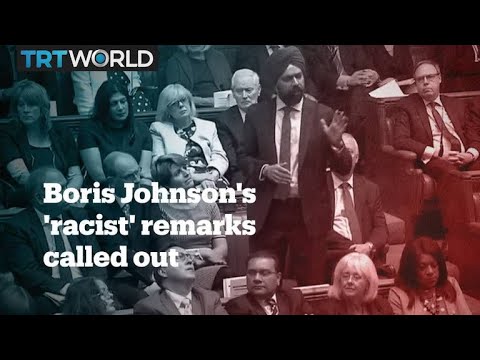 Belfast (Informed Comment) – The new British PM Boris Johnson prided himself on having a diverse government. Actually only on September 4, his new chancellor, Sajid Javid was proud to say during his first spending review speech that someone with his background, the son of a Muslim bus driver, can become what he became. But is this the true face of the Tory Party (also known as the Conservative Party) or is it just a facade to hide the scale of the problem that the party has with racism and Islamophobia? Perhaps what Javid failed to mention, however, helps to answer this question. He didn’t say that he was asked to cancel his own spending review speech and instead told to go with what was prepared for him. He didn’t say either that his own media adviser, Sonia Khan, was sacked by the PM adviser, Dominic Cummings without informing him as if he is there to follow orders.

Moreover, during Trump visit to the UK in June, Javid, who was then home secretary, was excluded from the state banquet though more junior ministers were invited. Alas Javid didn’t have the courage to call out the Tories on their racist behavior. Sayeeda Warsi, a Muslim woman who was a co-chair of the Conservative Party described the snub as “Islamophobia.” Warsi also said on her twitter account: “To use my own phrase from 2011, ‘Islamophobia has passed the dinner table test’.” Javid silence over his treatment by his own party reflects a chronic problem of lack of assertiveness among community and political Muslim representatives though this has started to change.

In fact, Javid’s boss, Boris Johnson himself is guilty of Islamophobia. He wouldn’t apologize after he wrote in an article that Muslim women wearing the burqa or niqab look like bank robbers and letterboxes despite being asked to apologize in his first PM question time. Statistics showed that his comments were followed by a sharp rise in attacks on Muslims. Additionally, In his book, Have I Got Views For You, Boris said: “The proposed ban on incitement to ‘religious hatred’ makes no sense unless it involves a ban on the Quran itself.” Johnson knows rightly that only a very tiny minority of Muslim women wear the burqa but his intention was to demonize and insult Muslims. What’s worse than that is the stunning silence of some feminists over a racist white man patronizing women and telling them how they should dress.

Michael Gove, who does not hide his western supremacist tendencies, is another leading Conservative Party member who holds extremist views about Islam and Muslims. When he was education secretary in 2014, himself and the right wing press relied on a fake letter detailing an alleged Islamist Trojan Horse plot to take over schools in Birmingham in England and Islamize them. Co-incidentally, the Trojan Horse plot was fantasized in Gove’s book Celsius 7/7 published in 2006 in which a chapter is entitled “Trojan Horse”. Gove appointed the head of the national counter terrorism to investigate the matter, a move that was described by the chief constable as “desperately unfortunate”. Obviously appointing such a person to deal with school children and teachers will only instill fear and distrust of Muslims into the heart of the nation.

Islamophobia, however, isn’t a new problem in the Tory Party that came with the new leader who is also an ally of Donald Trump. It is also a problem that runs from the party grassroots right to the very top. The problem is widely spread amongst ordinary members. An online survey conducted by YouGove on behalf of Hope not Hate showed that the views of the Conservative Party members are similar to the views held by members of the far right organizations. For example, 67% of the members believe the myth that there are areas in Britain that operate under the Sharia law. 45% believe the lie that there are areas where non-Muslims are not allowed to enter. Only 8% said they will be proud if they were to elect a Muslim as a PM. Conservative Party members are also more tolerant of other faiths when compared with Islam. Only 3% said immigration policy should allow more Muslims in the country compared with 16% for Jews and 25% for Christians. Despite these shocking figures, only 8% think that there is Islamophobia in their Party while 79% don’t think the problem exists.

These are only examples of Islamophobia in the Conservative Party which demonstrate that it is a serious, widely spread and deeply rooted problem. The party needs to acknowledge that it exists and to draw a plan of action in order to deal with it. This will not happen unless more light is shed on the problem and the pressure kept piling on the party.