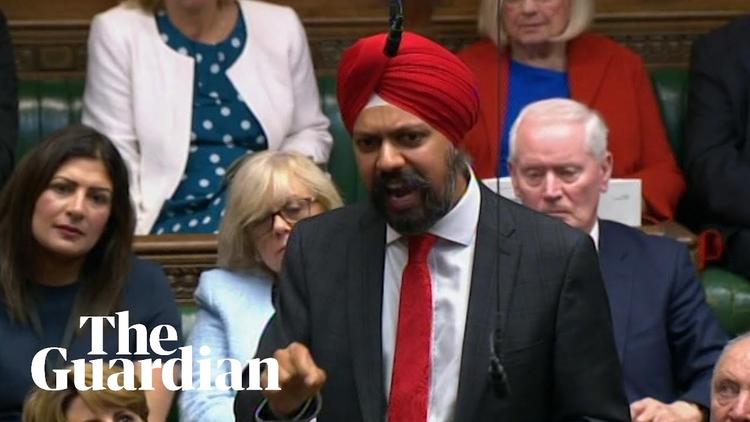 “The Labour MP Tanmanjeet Singh Dhesi, who wears a turban, won a round of applause in the Commons for asking an angry and passionate question about Boris Johnson’s language about minorities, and particularly his column about Muslim women who wear the burqa looking like letterboxes. The prime minister said his comments were ‘a strong liberal defence of what women wear’, adding: ‘Under this government, we have the most diverse cabinet in the history of this country’.”

Sikhs are not Muslims, making PM Dhesi’s impassioned defense of the latter all the more noble.

Tanmanjeet Singh “Tan” Dhesi MP (born 17 August 1978) is a British Labour Party politician. He was elected as the Member of Parliament (MP) for Slough in 2017.

Dhesi was born in Slough, and spent his early years in Chalvey.

He is the son of Jaspal Singh Dhesi, who runs a construction company in the UK, and who is the former president of Guru Nanak Darbar Gurdwara, in Gravesend, Kent, the largest gurdwara in the UK.

Dhesi has a bachelor’s degree in mathematics with management studies from University College London, studied applied statistics at Keble College, Oxford, and has a Master of Philosophy in the history and politics of South Asia from Fitzwilliam College, Cambridge.

In 2012, his mother, Dalwinder Kaur Dhesi, was jailed in India, for kidnap and forcing an abortion on a teenage mother, who later died. The conviction was criticised by many commentators for being politically motivated, and an appeal was filed by Dalwinder in the immediate aftermath of the decision. In 2018, a double bench of the Punjab and Haryana High Court upheld this appeal. All charges against her were subsequently dropped.

Dhesi was the former mayor of Gravesham and the chair of Gravesham Constituency Labour Party in Kent where he stood unsuccessfully during the 2015 general election, losing out to Conservative MP Adam Holloway.

He became Britain’s first turbaned Sikh MP in the 2017 general election after gaining the nomination following Fiona Mactaggart standing down. He gave his maiden speech in the House of Commons on 18 July 2017 which was praised greatly by fellow MPs Gareth Snell and Mike Gapes.