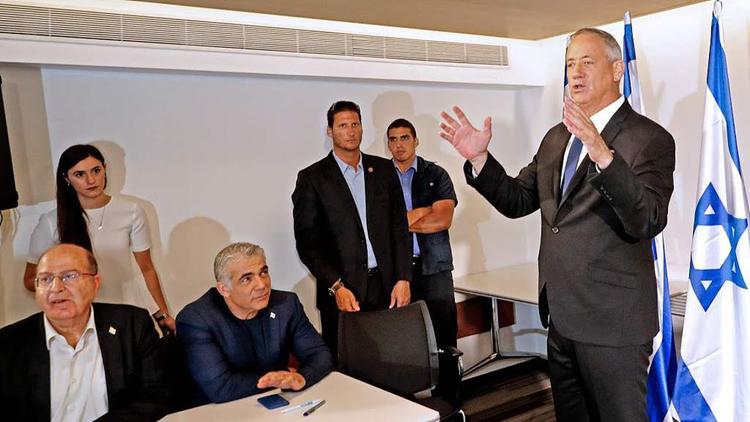 (Informed Comment) – The outcome of the Israeli election is still difficult to predict, since in parliamentary systems the horse trading comes after the election. This much is certain, though: Benjamin Netanyahu’s day is done as the man who would be king. That’s how he perceived himself, and that’s what he ran on. This included campaign ads and billboards prominently featuring President Donald Trump – The American Evangelicals King Cyrus and Israel’s would be King Ahashuyera in an unholy alliance. Huey Long would have been envious, except that the Israeli electorate ultimately rejected Bibi’s fearmongering, corruption and imperial presumptions. Maybe making Trump the face of his campaign wasn’t the best idea. The campaign billboards, “In Another League,” with the two men in a warm embrace, reminded some Israeli voters that they wanted a Prime Minister and not an imperial ruler.

Meanwhile, Trump has quickly abandoned his Israeli campaign partner, whom he supported by approving all the self-destructive compulsions that Barack Obama resisted, including moving the American Embassy to Jerusalem, and intent to annex the Palestinian territories. Now that Bibi is not useful to him anymore, Trump is moving along without him in his campaign to threaten or destroy all life forms on earth.

The most important upside to this is that a ray of hope remains for an Israeli-Palestinian peace accord. Bibi’s election would have been the death knell for a viable two-state solution, as he promised in the campaign. Neither side will have an easy time forming a government, and the effectiveness of any new one will be hampered by the awkwardness and competing agendas of the chosen bedfellows.

While Bibi has been at war with everyone in the Israel and Middle East except his coalition partners, Trump prosecutes his personal war on education, fact-based journalism, fact-based science and the American media. Twitter has allowed itself to become the 21st Century version of Hitler’s plastic radios, programmed to only one channel, which offers only information he wants dispensed, and unfiltered insight into his thought process. If Twitter would rightfully suspend his privileges for say 30 days, Trump would have to deliver his message through the American media, which he has masterfully bypassed with Twitter’s help. How come more people don’t demand that they cut him off, as they would any other user who so abuses the medium?

The recent death of folk singer Mary Travers prompted me to recall meeting her at an event to raise awareness for Soviet Jews in the late 80’s. A lot of Jewish people are all about the “Hammer of Justice” and the “Bell of Freedom,” except when it comes to the Palestinians. That was her message that day – that the Hammer and the Bell don’t apply to the Palestinians. She was catering to her hosts, who are wedded to the far-far right. When I spoke with her privately, she parroted the usual Zionist bromides, and they gave her a nice honorarium for that.

Regardless of who forms a government, Bibi won’t be able to implement some of the imperial, fascist elements he attempted. This includes his attempt to pass legislation exempting him from fraud and corruption charges, install cameras in voting booths to combat “voter fraud,” and Trumpian attacks on the media, judicial system, election commission and police. His declaration to annex the Palestinian territories and start a new war in Gaza were intended to stir his onerous “base” and get them to the polls. But this backfired because Likud actually lost four seats from its total five months ago. Bibi demonizes Arabs in the same manner that Trump does to American citizens who are black or brown. They both know this is distasteful, but also know it riles up their “base.”

In Israel, the Israeli Arabs are considered the least important electoral segment to be accounted for. The Haredim (ultra-Orthodox Jews) are the next least popular that must be humored. A growing number of Israelis resent the exceptional treatment they get including exemption from military service; limitless funding for the yeshivas that teach no English, social studies or math, and an outsized influence on government policy and secular affairs. Likud has been dependent on the religious right to form a government in the past; Benny Gantz’s Blue and White Party will need to include the Israeli Arab parties to have a working coalition. While Bibi campaigned against Israeli Arabs as a bogeyman, Gantz campaigned against the “oppression of the Orthodox.” (My expression, not a campaign slogan.) Both prospects are tenuous, and neither wants to form a unity government. So there may be need for yet a third round of elections soon.

The “kingmaker” in all this is Defense Minister Avigdor Liberman, who leads the Israel Beitenu Party. In an obtuse way, he represents the Israeli “mainstream,” campaigning against both the Arabs and Haredim. But by campaigning against both, he got more of them to the polls, even if neither group gained any added electoral power. Both groups have a seat at the negotiating table, but will have to become more cooperative with mainstream norms to keep that presence. Bibi’s defeat lessens the Haredim’s ability to dictate to the rest of the country, and keeps hopes for a two-state solution alive.

Trump and Bibi are both powerful men who claim to be embattled by politically motivate “witch hunts.” Though Trump plays that card every day, and it clearly stirs his unwashed masses, that backfired on Bibi. Now he’ll have to face corruption charges. So if a third election is necessary, the judicial process will be underway by then, and Bibi may be under criminal indictments. No clear winner thus far.