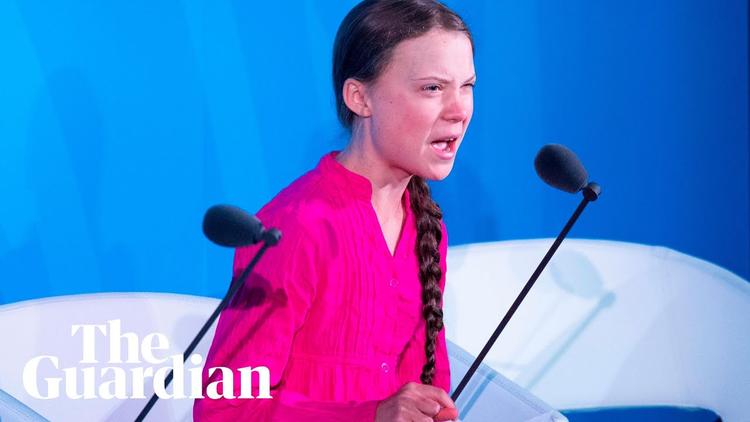 Ann Arbor (Informed Comment) – Greta Thunberg, in her speech to the United Nations General Assembly, let them have it.(See below.) Over a century ago, when authoritarian elements in the French officer corps trumped up a treason case against a Jewish officer, Alfred Dreyfus, novelist Émile Zola wrote an open letter to the president of the French Republic, which began “I accuse” (j’accuse), in which he named an anti-Semitic major as the culprit behind the miscarriage of justice. Zola changed the terms of discourse about the Dreyfus affair from the question of whether Dreyfus committed treason to the question of who framed him.

In mobilizing people for political accomplishments, framing is everything. The 100 corporations that emit most of the world’s suffocating carbon dioxide first tried to frame the crisis as illusory and untrue. Then they argued that the science is disputed. More recently they’ve tried to suggest that emissions are an individual problem and could be solved by individuals becoming vegetarians and such stuff and nonsense as that. The hundred include state-owned Chinese coal companies and in the private sector, ExxonMobil, Shell, BP and Chevron as the highest-emitting companies, whose profits depend on the burning of fossil fuels. ExxonMobil covered up its own scientists’ findings of rapid global heating and paid for PR campaigns to muddy the waters and allow it to keep profiting from wrecking the planet.

Thunberg isn’t having it. What these corporations and their governmental enablers are doing is a crime. It is a tort, with real live victims. They include everyone who is now, like Ms. Thunberg, 16 years old, since the current corporate carbon dioxide emissions are creating increasing global heating that will rob them of a normal life as we defined normal in the twentieth century. She told them, “You have stolen my dreams and my childhood with your empty words.”

But it isn’t only the future against which an epochal crime is being committed. It is the millions who have already been displaced by drought, wildfires, sea-level rise, storm surges and extreme Hurricanes turbocharged by Frankenstein-like warm oceans. Thunberg took up their cause, too.

Above all, she dismissed the discourse of hope. She demands immediate, practical action. No big vacuum cleaner will be invented to suck carbon dioxide out of the atmosphere at an affordable cost. Capturing carbon dioxide and storing it is extremely dangerous, since the gas could kill large numbers of people if it leaked. Individuals skipping a hamburger or going green is not enough. We need governmentally-supplied infrastructure. We need trains and metros. We need electric buses and automobiles. The latter require charging stations. The task can’t be accomplished by individual consumers.

Governments, the representatives of which she was addressing, have been mostly do-nothing. They are accomplices in the crime. They give big monetary subsidies to the biggest polluters, actually paying them to commit the crime.

Ms. Thunberg’s version of “j’accuse” is “How dare you?”

“‘You have stolen my dreams and my childhood with your empty words,’ climate activist Greta Thunberg has told world leaders at the 2019 UN climate action summit in New York. In an emotionally charged speech, she accused them of ignoring the science behind the climate crisis, saying: ‘We are in the beginning of a mass extinction and all you can talk about it money and fairy tales of eternal economic growth – how dare you?'”

Guardian News: “Greta Thunberg to world leaders: ‘How dare you? You have stolen my dreams and my childhood’

“My message is that we’ll be watching you.

“This is all wrong. I shouldn’t be up here. I should be back in school on the other side of the ocean. Yet you all come to us young people for hope. How dare you!

“You have stolen my dreams and my childhood with your empty words. And yet I’m one of the lucky ones. People are suffering. People are dying. Entire ecosystems are collapsing. We are in the beginning of a mass extinction, and all you can talk about is money and fairy tales of eternal economic growth. How dare you!

“For more than 30 years, the science has been crystal clear. How dare you continue to look away and come here saying that you’re doing enough, when the politics and solutions needed are still nowhere in sight.

“You say you hear us and that you understand the urgency. But no matter how sad and angry I am, I do not want to believe that. Because if you really understood the situation and still kept on failing to act, then you would be evil. And that I refuse to believe.

“The popular idea of cutting our emissions in half in 10 years only gives us a 50% chance of staying below 1.5 degrees [Celsius], and the risk of setting off irreversible chain reactions beyond human control.

“Fifty percent may be acceptable to you. But those numbers do not include tipping points, most feedback loops, additional warming hidden by toxic air pollution or the aspects of equity and climate justice. They also rely on my generation sucking hundreds of billions of tons of your CO2 out of the air with technologies that barely exist.

“So a 50% risk is simply not acceptable to us — we who have to live with the consequences.

“To have a 67% chance of staying below a 1.5 degrees global temperature rise – the best odds given by the [Intergovernmental Panel on Climate Change] – the world had 420 gigatons of CO2 left to emit back on Jan. 1st, 2018. Today that figure is already down to less than 350 gigatons.

“How dare you pretend that this can be solved with just ‘business as usual’ and some technical solutions? With today’s emissions levels, that remaining CO2 budget will be entirely gone within less than 8 1/2 years.

“There will not be any solutions or plans presented in line with these figures here today, because these numbers are too uncomfortable. And you are still not mature enough to tell it like it is.

“You are failing us. But the young people are starting to understand your betrayal. The eyes of all future generations are upon you. And if you choose to fail us, I say: We will never forgive you.

“We will not let you get away with this. Right here, right now is where we draw the line. The world is waking up. And change is coming, whether you like it or not.