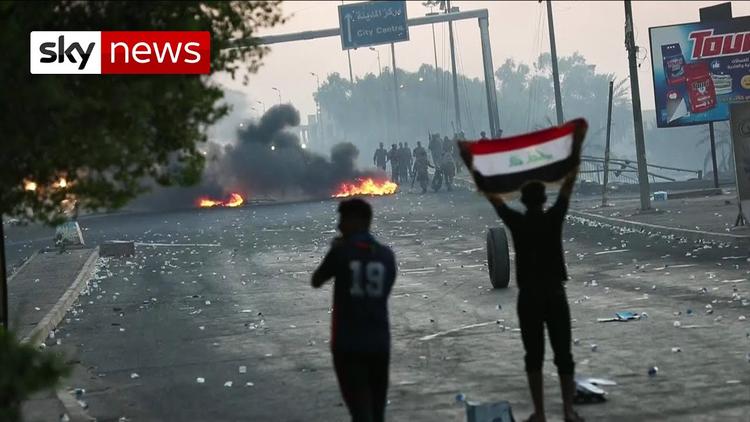 (Niqash.org ) – Anti-government protests in Baghdad were led by the younger generation, one that has grown up under military rule, lived a more liberal life online and is now questioning the very basis of local, political culture.

More than a hundred deaths and over 4,000 wounded as a result of five days of anti-government protests, quite possibly the largest such demonstrations in Iraq since 2003. But this time the protests have been led by a different generation of Iraqis, those born in the 21st century, who have grown up with Justin Bieber and Facebook and in a country that was controlled by the US military for a large part of their youth. This is the generation of Iraqis who have tuned religious songs into rap tunes.

On October 1, thousands of young Iraqis – the vast majority of them male, only a handful of women have taken part – marched to Baghdad’s central Tahrir Square, the scene of many such actions. There were also demonstrations in provinces further away, including in Dhi Qar, Basra, Diwaniyah and Wasit.

What did we do to deserve this? We are peaceful and unarmed. We will not forgive the politicians for this.

The demonstrators were motivated by a wide variety of things – anger over corruption, a lack of jobs, deficient state services – and there were even some conspiracy theories springing up about why the demonstrations were happening. But one thing seemed certain to most onlookers: The youth of Iraq were on the streets for a just cause. As a nation, Iraq is mired in corruption, represented by politicians that seem mostly concerned about protecting their own interests, and dealing with a lack of state services, such as the provision of water and power, and damagingly high youth unemployment. Iraq is also caught in the middle of international tensions between two major allies, Iran and the US.

“I feel ashamed when I’m online, on social media, and I see the streets, schools and development in other countries all around us,” says Raed Latif, 19, emotional as he explains why he’s taking part in the protests. “Meanwhile in Iraq, I have nothing to be proud of. I love my country and I want to change the current state of things.”

Latif had been sneaking out of the house without telling his mother that he was joining the protests. One day last week, his mother found out and locked him inside, making the teenager promise not to go out. He snuck out again anyway.

The authorities have tried to stop the protestors from contacting one another and to quell reports of the demonstrations and counter actions by throttling the internet nationwide. But the young demonstrators have still managed to post and publish pictures and videos, and to communicate.

Our reactions are based on how an individual behaves, not who they are, or which tribe they belong to.

Besides using it as an organisational tool, one might also argue that this younger generation of Iraqis is also impacted the online world more than their elders – they’ve grown up with social media and electronic gaming, using sites like PUBG, or Player’s Unknown Battle Ground, a multi-player online game, to communicate with young people all over the world. Ideology and religion still matter to them – they live in Iraq, after all – but they’ve also been in touch with other social groups in other countries online, and it’s potentially given them a more liberal outlook than their parents.

There’s an interesting disconnect between older generations in Iraq and this younger one taking to the streets with clear demands for more jobs and better conditions as well as an end to corruption.

During a seminar held in Baghdad last month by a local civil society organisation, a doctor in his 50s started his speech criticising the “youth of today”. He said that younger Iraqis are fickle, they spend their mornings praising some individual on Facebook only to turn upon them by the evening. “This is a generation with no opinions and no steady moral compass,” he complained.

A younger member of the audience stood up to rebuke the doctor. “What you say is true,” the participant conceded. “But when we praise somebody in the morning and criticise them in the evening, that is because we are basing our reactions upon that person’s behaviour. At one stage, we feel his behaviour is good. At another, we feel it is bad.”

Younger Iraqis are different precisely because of such subjective attitudes, he argued. “We don’t have any affiliations,” the young man continued. “Our reactions are based on how an individual behaves, not who they are, or which tribe they belong to. We are not like those [the older generation] with partisan connections and old-fashioned ideologies, who don’t care whether a person is right or wrong, just who their connections are.”

After a young protestor was killed by security forces last Sunday, his friends searched his pockets for a mobile phone with which they could call the dead man’s parents. They found IQD1,000 note, equivalent to about one US dollar, and they also found a phone. It was very old mobile phone, filled with dozens of videos of the Baghdad demonstrations. When the other young men tried to call the dead man’s parents using the phone, they found they were unable to get through: There wasn’t even enough credit on the phone even to do this.

“What did we do to deserve this?,” mourned Abdul-Karim Khaqani, a 22-year-old demonstrator. “We are peaceful and unarmed. Why did they attack us with live ammunition? We will not forgive the politicians for this and if we fail this time, we will be back. We will protest again. We have nothing to lose,” he said, “other than our lives.”

Sky News: “What has caused the latest violent protests in Iraq?”