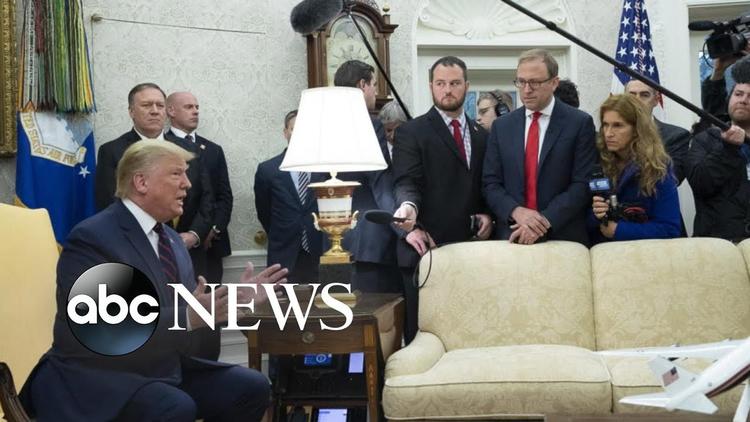 Ann Arbor (Informed Comment) – Dispatches from the Great Trump Clown Parade, which would be gut-busting hilarious if it did not involve real-world dark horrors, including the displacement of some 130,000 Kurds along with deaths and woundings, and the escape of over a hundred ISIL detainees.

An unprecedented bipartisan congressional resolution was passed Wednesday against his greenlight to Turkey to invade the Kurdish region of northeast Syria, which passed 354-60, with substantial GOP buy-in. Trump’s petulant reaction was to shout at house speaker Nancy Pelosi that she was a third-grade politician when the Congressional delegation went to consult with him, provoking her and others to get up and leave the meeting. Pelosi expressed her concern at Trump’s melt-down and his mental health.

Trump’s other reaction was to attack the victims of his seat-of-the-pants policy whim, repeatedly saying at a press conference held earlier in the day that “the Kurds are no angels.”

Before he started maniacally shouting at Pelosi, He is reported to have said that there are communists in Syria and that the Democrats would like that.

As usual, it is difficult to tease out what Trump might have meant by the remark, but it is possible that he is referring to the Kurds, many of whom were communists in the 1980s and 1990s. The major Kurdish organizations formally abandoned communism at congresses in the 1990s, considering themselves post-socialists. Many adopted the ideas of Brooklyn social and political theorist Murray Bookchin, which urged building up cooperatives from the bottom up as a way of displacing capitalism.

It would be Turkish president Tayyip Erdogan who told Trump that he was allied in Syria with communists.

Trump even tweeted out that the Turkish-Kurdish group, the Kurdistan Workers Party or PKK “is probably worse at terror, more of a terrorist threat in many ways, than ISIS.” He said that the PKK is “part of the Kurds.”

Trump: "The PKK, which is a part of the Kurds…is probably worse at terror, more of a terrorist threat in many ways, than ISIS." (?)

It is true that the Turkey-based PKK is considered by the US and Turkey as a terrorist group and that it engaged with the Turkish army in a dirty war beginning in the 1980s. Some 30,000 people are thought to have died in the war. Although the Turkish army committed atrocities, so did the PKK, including murdering suspected informers.

However, the Syrian Kurds were not involved in all that, at least in any direct way, and are not PKK, whatever Ankara says. They have not been viewed as terrorists by the US government, which has partnered with the Democratic Union Party and its paramilitary, the People’s Protection Units (YPG) to defeat ISIL, which is definitely far far more evil than any Kurds.

At the same time that Trump smeared all Kurds as terrorists, he pushed back against Turkey’s Erdogan, warning him he was becoming “a fool” and even “the devil” if he continued his campaign in northeastern Syria, which he invaded last week after Trump told him it would be OK.

Trump wrote Erdogan a third grade pen pal note castigating him for risking becoming the villain of the peace, which is the opposite of what he told him on the phone last Sunday. 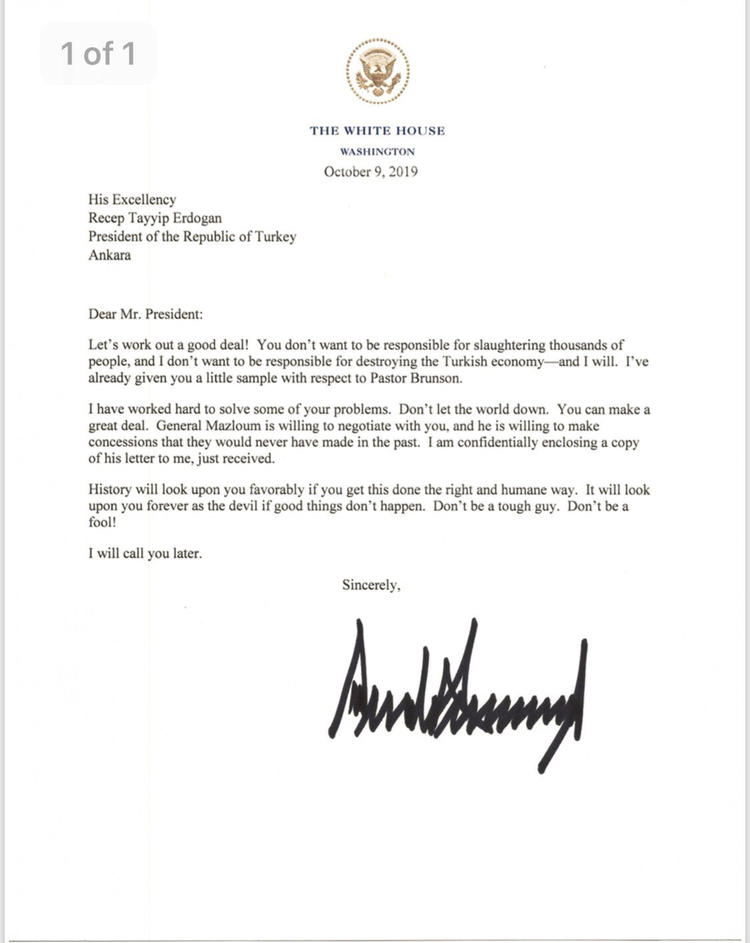 In his joint press conference with Italian president Sergio Matarella, Trump further attacked the Kurds whom he stabbed in the back. Among his gems:

“Syria and Turkey may fight. Syria is friendly with the Kurds. The Kurds are very well protected; plus, they know how to fight. And, by the way, they’re no angels, but they were with us. They are no angels. But they are fighting. We are largely out of that area. We’re very well set. We have quite a contingent, right nearby, of soldiers and of the finest equipment in the world. I don’t think we’ll have to use it.”

The Syrian government has not been very friendly with the Kurds, though they were de fact allies in the fight against ISIL. In the 1960s, the Arab nationalists stripped many Kurds of Syrian citizenship, giving them a third-class status. The Baath Party brooks no dissent and oppressed Kurds before the 2011 revolution, after which they became semi-autonomous. Trump caused that semi-autonomy to collapse by giving the Syrian Kurds to Turkey, and forcing the Kurds to bring in the Baath regime and Russia as a counter.

Actually from 1516 until 1914, what is now Syria and Iraq, including Arabic-speakers and Kurdish-speakers, were Ottoman subjects, just as the Turkish-speakers were, and indeed a little later Greece, the Balkans, Romania, the Hungarians and a bit of southern Poland joined them. So Syrians, Kurds and Turks haven’t been fighting for hundreds of years.

The fights only emerged with the rise of modern nationalism in the 20th century. Nationalism reorganizes society on the basis of identity markers like language, ethnicity and religion, rather than as in the past by imperial domination and allegiances.

As for sand, the Jazira in northeast Turkey where Kurds predominate is the most fertile productive agricultural region in Syria. Sand isn’t at issue, despite Trump’s unreconstructed racist Orientalism.

I just can’t. The stupid makes my head hurt.