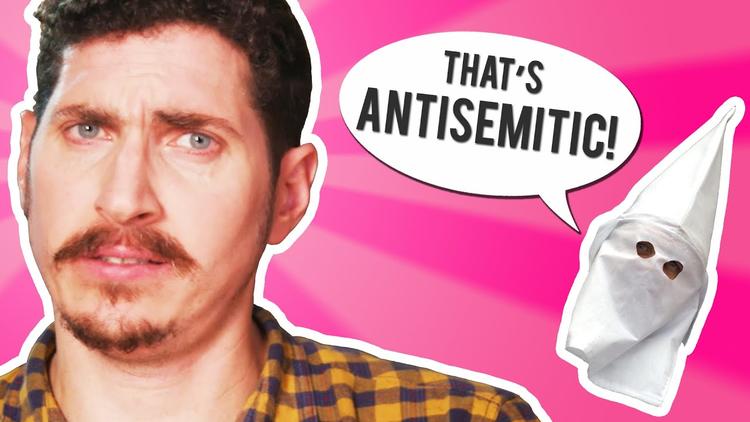 “Progressives criticizing Israel keep being painted as antisemites. Why? Because according to many American politicians, criticizing the right-wing government of Israel is anti-Semitic. Newsbroke’s Matt Lieb explains how this twisted conservative, catch-all defense actually upholds the white nationalist cause… in America.”

( Otherwords) – Weeks ago, when the first accusations of anti-semitism were being leveled against Representative Ilhan Omar, I was deeply agitated.

Not long ago I saw her address these accusations at a local town hall. She reminded the world that, as a Black Muslim woman in America, she knows what hate looks like — and spends her life laboring against it. Her words were clear, bold, and unflinching.

When members of Congress not only continued to gang up and falsely smear Omar as anti-semitic, but even created a House Resolution painting her words as hateful, I wasn’t just agitated. I was absolutely disgusted.

Omar has criticized the U.S. government’s support for Israeli actions that break international law. And she’s spoken out against the role money in politics plays in shoring up that support.

What is anti-semitic is the cacophony of mainstream media and politicians saying that criticizing U.S. policy toward the state of Israel is the same as attacking Jewish people.

Like most American Jewish youth, I grew up knowing Israel. During holidays, I sang prayers about Eretz Yisrael, the land of Israel. In Hebrew school, I learned about the country’s culture, its cities, its past prime ministers. At my Jewish summer camp, we started every day with the Israeli national anthem, Hatikvah.

My image of Israel was a rosy one. When I finally visited it in college, I was spellbound by the lush landscapes and sparkling cities, certain I would one day move to this golden ancestral home myself.

All this emotional buildup made it all the more sickening when, in the years that followed, I learned the realities of the Israeli occupation.

The modern state of Israel was established by Zionists — a nationalist movement started by European Jews with the aim of creating a “Jewish state” as a refuge for persecuted Jews.

In 1948, Israel’s war of independence led to the Nakba, an invasion driving 700,000 Palestinians from their homes. These Palestinians were never allowed to return, creating a massive refugee population that today numbers over 7 million.

While I was able to travel freely up and down Israel, the Palestinians who once lived there are legally barred from returning. While I wandered the marketplaces trying stews and shawarmas, Palestinians in Gaza can’t afford even the gas to cook their food because of the Israeli blockade.

Zionism didn’t create an inclusive Jewish refuge either. In fact, the diverse Mizrahi — or Arab — Jewish population that was already thriving in Palestine was pushed out of Israeli society as Ashkenazi — or European — Jews became the elite class.

What it did create is an imperialist stronghold that continues to break international law by building settlements deeper and deeper into Palestinian territory, giving Jewish Israelis superior legal status to Arab Israelis and Palestinians, and attacking all who protest.

Pro-Israel lobbying groups’ considerable political influence has even pushed Congress to consider bills punishing Americans who support Palestinian rights. (Around half of all states already have such laws.)

More broadly, they rely on villainizing critics with false claims of antisemitism — especially when the criticism comes from a person of color, as we’ve seen with Angela Davis, Marc Lamont Hill, and Michelle Alexander before Rep. Omar.

I, along with an increasing number of young American Jews, want to discuss U.S. support of Israel. Talking foreign policy is not anti-semitism.

What is anti-semitic — always — is saying that all Jews support violence and imperialism.

Sarah Gertler is the Newman Fellow at the Institute for Policy Studies. Distributed by OtherWords.org.

AJ PLUS AJ+ is an online news and current events channel run by Al Jazeera Media Network (AJMN), and based in San Francisco.