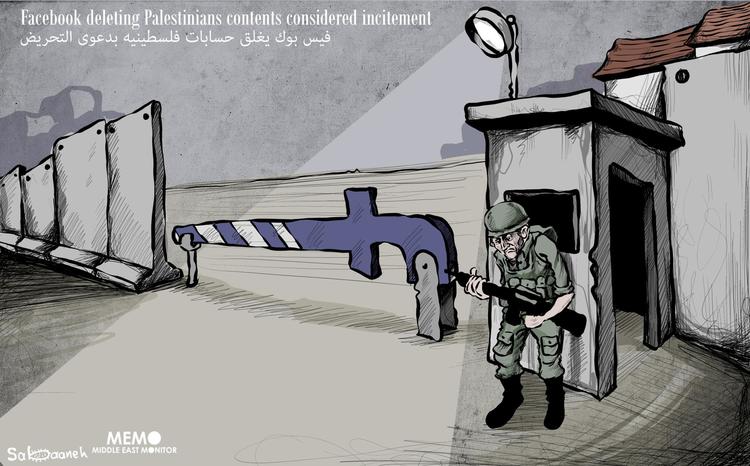 When the Arab youth revolted in 2011 to demand freedom and democracy in their countries, Facebook was the social media platform of choice for crowd mobilisation, a proven experience in other contexts around the world. When Palestinian youth tried to take a chance and speak out against the Israeli occupation to mobilise the masses against it via the same platform, they faced hindrances from Facebook, which is the leading platform in Palestine. During the Arab Spring, this social networking platform banned prominent Palestinian pages, some of which had called for mass civilian rallies against the Israeli occupation, calling it the “third intifada”.

What appeared at the time as sporadic, became a growing occurrence, until Palestinians complained about Facebook management’s continued targeting of their accounts. Every morning, customary messages are sent announcing increasing numbers of well-known Palestinian organisations and figures, as well as ordinary citizens, having been banned from the most widely-used platform. There have been similar complaints from Arabs expressing solidarity with the Palestinian cause.

It is enough to use specific terms for Facebook to ban a post, or completely deactivate an account, and it often does not issue a clear justification to those affected. This makes them prone to making assumptions to explain the loose nature of the ban notice that appears. Many Palestinian accounts have suffered from this bitter experience over the years, as whenever a specific page succeeds in gaining followers, it receives a notice from Facebook deactivating the account and losing the followers it has gained with much effort. It is then forced to start from scratch with alternative accounts, only for this to occur again.

Palestinian content is suffering from an increased crackdown on Facebook, which developed algorithms that harasses this content, for example, by tracking vocabulary, images and videos shared about reality under the occupation. This is used as a pretext to deactivate Palestinian news pages, merely for mentioning the names of specific organisations or people. This targeting is escalated by the fact that the Palestinian accounts are facing monitoring from specialised Israeli circles that monitor their content, in order to incite against them and to report alleged abuses that result in their bans. The Israeli officials do not want Palestine to have a platform for influence on the social networking site. The banning measures have reached a climax, with the increased interaction on the social networking site marking special events and after the constant killings committed by the occupation forces. Accounts have been banned due to posting the names of Palestinian martyrs, for example, or under the justification of posting pictures and videos showing the bleak reality, which limits the presence of the Palestinian narrative and versions of events.

Given this suppressed situation, the Palestinians feel that the Facebook management count their every word and impose a ‘curfew’ on them, even in the virtual world. This is reminiscent of the extensive experience of the local Palestinian society with the Israeli occupation’s measures of banning them from leaving their homes, and restricting their movement to their neighbourhoods. This also includes Israel’s confrontation of protests with excessive oppression. Ultimately, the Palestinians are facing restrictions and persecution in their realities and in their virtual worlds, as they are suffering from demolition policies ordered by the occupation authorities. Palestinian social media activists witness the demolition of their virtual homes on the social networking site, that they have spent many years building, on the orders of the Facebook authorities that do not care about their objections.

As a result, it has become a popular tradition for Palestinians to express certain terms and vocabulary in convoluted ways, attempting to bypass the artificial intelligence algorithms that monitor them. This includes dividing some words, rewriting them by mixing Arabic and Latin letters, or by replacing some letters with symbols. This is a well-known method used on social media to censor profanities. The need to go to such exceptional lengths has created a deep sense amongst the Palestinians and those in solidarity with their cause, that Facebook is blatantly censoring them and forcing them to be vague, depriving them of their right of expression by imposing additional restrictions. The circle of those affected widens to include other social media sites, especially since the measures of a large platform clearly influence the behaviour and regulations of other social media sites.

The anger of Palestinian and Arab users was heightened after Facebook banned certain words, and began holding users accountable, retrospectively, for posts they made years ago. Many affected users expressed their disturbance of the ban, and many reports were issued condemning it. Meanwhile, many voices expressed feelings of frustration towards what they saw as authoritarian treatment towards them, by the companies controlling the social networking platforms, which made them feel helpless and at a loss for options to deal with them. On September 30 2019, Sada Social, a Palestinian youth initiative, wrote a strongly worded letter to Facebook, to complain about the harassment and crackdown that has increased towards Palestinian content. The letter was written after Facebook battled many words related to the Palestinian cause, and added them to the list of words banned on the blue website, thus subjecting hundreds of Palestinian accounts and pages to various sanctions by the platform’s administration. These sanctions reached the extent of deactivating accounts and pages over ten years-old. Sada Social also urged the Facebook policies department to adopt an objective view of the Palestinian cause, and to take into consideration the fact that the Palestinians have the right to use this platform to express their views and beliefs, like other users do around the world.

Palestinian disillusion with Facebook has increased to become a growing discontent with its tough measures, that worsens year after year, but the dilemma is that the affected masses are still at a loss as to how to deal with abuses attributed to social media administrations. Web platforms have no physical address in the real world, which stops them from expressing anger in the traditional manner and confronting its authoritarian behaviours that have not been discussed. As for abandoning the platform that they have increasingly complained is biased, does not seem a realistic option so far. Self-banning from the platform could be considered as giving in to the efforts to silence the Palestinian content. Despite this, the Palestinians are trying to raise the issue with successive campaigns in the blue world itself, against the targeting of their freedom of expressing their reality and cause. Meanwhile, several reports are being issued by human rights, civil society and specialised organisations, all warning against the censorship, ban, and restriction methods adopted by Facebook against the Palestinian content, which are growing year on year.

The growing impediments to this content are cause to assume that if this social platform existed in the last century, it would not have tolerated movements of liberation from colonialism, nor would it have eared the global anti-apartheid solidarity in South Africa. The platform may have imposed restrictions similar to those suffered by the Palestinian people under the pretext of “violating community standards.”