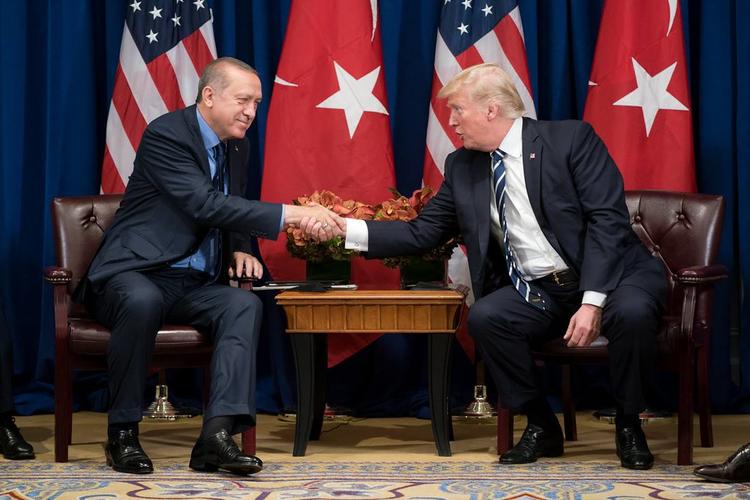 (Foreign Policy in Focus) – From the U.S. to the U.K. to Turkey, it is a hallmark of right-wing populists to make a preposterous policy and then be forced to retreat.

It is a hallmark of right-wing populists to make a preposterous policy and then be forced — by opposition, by circumstance, by the laws of physics — to retreat.

For progressive forces, the key challenge is to figure out how to turn these tactical retreats into full-blown failures.

Donald Trump declared last Thursday that the next meeting of the Group of Seven would be held at his own Doral resort in Florida.

According to former ethics chief Walter Schaub, “There is no definition of corruption that would not cover the president participating in a contract awarded to himself. So, if this is not corrupt, nothing is corrupt.”

By Saturday, Trump had reversed himself. The pushback from former government officials and the mainstream media had little to do with Trump’s decision. It was all about his Republican Party colleagues telling him that they were having difficulty keeping a straight face when mounting a defense of presidential actions.

In the past, Trump has been forced to scale back on his proposals by the courts (Muslim ban), by Congress (the border wall), by lobbyists (gun control). Through it all, the Republican Party has gone along with varying degrees of enthusiasm ranging from mild toadyism to personality-cult devotion. But Trump’s standing within his party after more than two years of see-no-evil and hear-no-evil compliance with the chief is finally begin to slip.

The two proximate reasons for this slippage are Syria and Ukraine. And Trump is backpedaling on both of these fronts as well.

The impeachment inquiry currently hinges on whether Trump offered Ukrainian President Volodymyr Zelensky anything in exchange for digging up dirt on political rival Joe Biden and his son as well as possible interference by Ukraine in the 2016 presidential election. A number of former administration officials — most recently and definitively, diplomat William Taylor — have asserted that Trump held up the delivery of military assistance to Kiev as part of a quid pro quo.

Even the administration itself has acknowledged the quid pro quo. Last Thursday, White House Chief of Staff Mick Mulvaney told the press that, yes, the administration made military assistance conditional on three elements including Trump’s political ask. Further, this tactic is so routine, according to Mulvaney, that critics should “get over it.”

Mulvaney was faithfully parroting Trump’s position. But the chief of staff can’t get away with the same wink-wink-nod-nod nonsense that the president routinely peddles (“oh, I was just joking”).

Mulvaney tried to pretend in an interview on Fox News that he didn’t say what he said at the press conference. When confronted with video evidence, he could do nothing but squirm. He will soon suffer the same fate as previous lickspittle advisors who couldn’t dance the Trump two-step nimbly enough.

Meanwhile, the president continues to reverse himself on Syria. His announcement this month of a complete withdrawal of U.S. troops from the country — the second such attempt to “cut and run,” as Republicans once liked to characterize Democrats trying to end U.S. military engagements overseas — met with resistance from practically everyone: Trump’s own national security team, a bipartisan majority in Congress, various overseas allies.

Again, Republican Party resistance has proven key as Trump backpedaled once again. It turns out that U.S. troops will indeed remain in Syria: to protect oil fields. The Kurds in the north will find no comfort in that announcement. The five-day ceasefire that Vice President Mike Pence negotiated with Turkey is running out, and Erdogan has vowed to “crush the heads” of any Kurdish fighters who have remained in the buffer zone.

Trump has also bizarrely promised that he might provide a cut of the oil profits to the beleaguered Kurds. Which Kurds? The ones who have fled to Iraq? The families of those killed after the withdrawal of U.S. troops? Syrian Kurds don’t need to be reminded of the anti-war slogan from the 2000s — no blood for oil — but it seems that Trump, who says that he opposed the Iraq War, needs a refresher course.

Trump’s backpedaling on the Doral, Ukraine, and Syria has nothing to do with any fundamental rethinking of these policies. The president is only interested in finding ways of normalizing his outrageous conduct.

In his televised cabinet meeting this week, Trump did his own amending of the constitution when he declared that the emoluments clause, which prohibits presidents from personally profiting from their position thanks to the U.S. government or foreign governments, is “phony.” The retreat on the Doral will soon be replaced by some other blatant violation of the emoluments clause because Trump is determined not just to interpret the constitution for his own benefit but to rewrite it in his inimitable style.

Trump is giving ground tactically. But he remains committed to demonstrating that he can invite foreign governments to interfere in U.S. elections, that he can violate the constitution and make money hand over fist during his White House tenancy, and that he can hand over the reins of geopolitics not to some international authority like the UN but to ruthless autocrats in Ankara and Moscow who care as little about human rights as the current U.S. president does.

Retreat, after all, is for losers.

Boris Johnson is like a bad magician: it’s painful to watch him fail over and over to pull a rabbit from his hat.

To ram his cherished Brexit through parliament by an October 31 deadline, he has resorted to any number of tricks: suspend the institution, kick people out of his own party, call an early election. He even did something that he obviously has a great distaste for: he negotiated another deal with the European Union. Then he brought that deal back for a vote in parliament.

On Tuesday, the British parliament actually passed a second reading of the Withdrawal Agreement Bill. But then it handed Johnson yet another defeat by refusing to fast-track that bill. So, there’s little to no chance that Brexit can happen by the end of October.

And the vote on the withdrawal agreement doesn’t really reflect how parliament feels about the latest EU-approved version of Brexit. The next stage in the parliamentary process is the committee stage where MPs debate the bill line by line. Then there’s a report stage, with an opportunity for amendment, and a “ping-pong” stage of going back and forth between the House of Commons and House of Lords.

In other words, given that the bill has a long way to go before a third reading, some members may have assented to the second reading just to move on to the more important vote of the day: rejecting the prime minister’s preposterous timeline.

On Saturday, a million people gathered in London on Saturday to demand another Brexit referendum. Indeed, Britons have increasingly had second thoughts about leaving the EU — or perhaps the reversal in sentiment is just a function of older Brexiteers dying off and a new Remain generation coming into its own (there’s been net loss and a net gain of around two million voters since 2016).

Even more startling, 52 percent of the population wants to decide this standoff through a second referendum, according to the latest polling, versus the mere 23 percent that prefers parliament to be the final arbiter.

But as in the United States, the leader can count on a group of fanatics that refuse to change their position regardless of new evidence or a change of circumstances. Consider these astounding figures:

I’d be interested in hearing how many Conservative Party members would rather see their own heads explode than give up on Brexit.

Idiocy is not, of course, the monopoly of the Conservatives. Despite the popularity of a second referendum, Labor Party leader Jeremy Corbyn is pushing for an early election and then a referendum (with the party remaining neutral on whether to stay or leave the EU). This is inexplicable because a second referendum is immensely popular, and Labor is not. Most polls show the Conservative Party with a significant lead in public opinion.

As for Boris Johnson, he’s willing to backpedal as far as he has to in order to get his Brexit. Trump’s retreats are all part of the normalization of his grotesqueries across a range of issues. Johnson, however, is a hedgehog, for he cares about only one thing. He’ll move his spiny little body any which way to achieve his one goal.

There’s an expression in French: reculer pour mieux sauter. It means, literally, to step back in order to better jump forward.

That’s what Turkish leader Recep Tayyip Erdogan has done in Syria. He took a big step forward when he invaded Syria earlier this month. When Vice President Pence and Secretary of State Mike Pompeo visited Ankara last week, they came away with what seemed to be a concession. Erdogan promised a five-day truce to give Kurdish fighters a chance to clear the area.

Those five days are up, and Erdogan has stepped back again. In a deal brokered with Russia, Turkey has agreed to stop its incursion, pull back its soldiers, and limit its operations to a six-mile swath of territory in northern Syria, alongside Russian troops. It will also maintain “oversight” over a 20-mile belt of land that it seized.

While Trump goes back and forth on his Syria policy, Erdogan has been very clear. He has achieved his goal: clearing a broad swath of northern Syrian territory of Kurdish influence. The autonomous Kurdish republic — a thorn in the side of Syria, Turkey, and Russia — is now gone. Erdogan can afford to step back because he has accomplished his mission.

It’s not as if the Turkish leader has stepped back in order to leap further into Syria. He doesn’t harbor further territorial ambitions. Turkey absorbed a chunk of Syria back in 1939 — now Hatay province — and that seems to have satisfied Ankara.

But Erdogan has much larger ambitions. He wants nuclear weapons — not the 50 or so nukes that the United States houses at Incirlik air base but nukes of his own. Write David Sanger and William Broad in The New York Times:

With Turkey now in open confrontation with its NATO allies, having gambled and won a bet that it could conduct a military incursion into Syria and get away with it, Mr. Erdogan’s threat takes on new meaning. If the United States could not prevent the Turkish leader from routing its Kurdish allies, how can it stop him from building a nuclear weapon or following Iran in gathering the technology to do so?

Trump has backpedaled so furiously on nuclear proliferation that it has become a full-scale retreat. It’s just one more example of the fatuousness of his “art of the deal.” Trump’s failed reputation as a dealmaker may not be sufficient, if the U.S. economy remains strong, to earn him a loss at the polls in 2020. But his failed and fraudulent deal-making on Ukraine may yet result in his removal from office by impeachment.