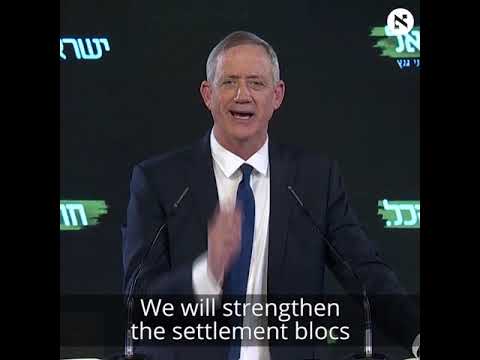 In the US, the two big parties make their coalitions before the election, including poaching on the other party’s constituents. Ten percent of Republicans voted for Obama. 14% of traditionally Democratic white working class voters who supported Obama switched to Trump. In the past 50 years, the Republicans have picked up the Evangelicals and the South more generally, while Democrats got most cities, gays, the non-religious, etc.

In parliamentary systems, such groups run for office under their own ticket and are courted by parties after the election, to get to a majority in the legislature.

Gantz has to put together 61 out of 120 votes in the Israeli parliament or Knesset, needed to form a government. But Gantz does not have that 61 any more than Netanyahu did. The Likud won 32 seats in the September 17 election, while Blue and White won 33.

In parliamentary systems, the government needs a majority of seats because the opposition will try to unseat it by calling a vote of no confidence. If at any point the prime minister cannot get a majority when it is crucial to do so, the government is said to “fall” and new elections are called.

To put together 61 votes that could survive a vote of no confidence, Gantz needs the support of 28 members of parliament beyond his own party.

The problem is that while those 28 votes are out there and might join Gantz, they for the most part refuse to sit together on the same side.

The third biggest party in parliament is Ayman Odeh’s Joint List, with 13 seats. it represents a diverse group of Palestinian-Israeli factions, mostly leftist but also including the Muslim Brotherhood. Some of the leftist parties also attract some support from the small minority of Israeli Jewish leftists. Some 20 percent of Israelis are Palestinian-Israelis, from families that weren’t ethnically cleansed in 1947-48 by militant Zionist militias who expelled from what became Israel 720,000 Palestinians (with the West Bank and Gaza, there were 1.3 million Palestinians then).

If Gantz could add the Joint List to his coalition, that would take him to 46 seats, and he would only need 15 more for a majority.

The problem is that Israeli society and politics are so racist that Gantz cannot formally ally with Israeli Arabs. It is like the Jim Crow era in the United States, when African-Americans were excluded from politics. The Palestinian-Israelis are allowed to sit in parliament, but these very representatives function under Jim Crow. Attempts have often been made by right wing Jewish politicians to expel their parties and members of parliament from that body. Sometimes Israel apologists point to these parties’ presence in parliament as proof that Israel is a liberal democracy. But that is like Jim Crow Southerners insisting they weren’t racists because they had Black people in their states.

Israel is in the midst of political gridlock primarily because Israeli citizens of Palestinian heritage are not permitted to be in government. In the September 17 election, Netanyahu actually ran on exclusion from active politics of 20% of the Israeli electorate. He warned that if Gantz got in there would be *gasp* Arab Israeli cabinet members. Gantz immediately denied he would do any such thing, revealing himself to be not much different from Netanyahu. It would be as though no Latinos or African-Americans could be cabinet secretaries in the United States.

Although Gantz was a general during the horrific 2014 Israeli attack on little Gaza, the Joint List is supporting him versus Netanyahu because the latter is just so odious.Netanyahu actively backs the Jewish squatters on Palestinian land in the West Bank and wants actually to annex large swathes of the West Bank (illegal in international law). They see Gantz as at least slightly better though not an awful lot better.

The fourth largest party is Avigdor Lieberman’s Yisrael Beitenu (“Israel is our Home”). It has 9 seats. Lieberman represents the big immigration into Israel of about one million Russians, Ukrainians and other former Warsaw Pact populations during the 1990s. Although many are ethnic Jews, for the most part they are militantly secular (25% of Israelis don’t believe in God, and the Russians bulk large in that statistic). Some 300,000 who came were not Jewish enough to be granted that status by the chief rabbinate in Jerusalem, so their identity cards show them as Gentiles. Lieberman himself is a first-generation immigrant accused of virulent racism and of corruption, though he hasn’t been convicted of anything. His party profoundly dislikes the Jewish Ultra-Orthodox or Haredim fundamentalists who strictly observe and insist all Jews in Israel have to strictly observe traditional Jewish law or halakha.

I have heard Israel-observers like the NYT’s Tom Friedman and former US ambassador to Israel Martin Indyk say that Lieberman is the kingmaker in this election. This is true in practical terms, but it is only true because Ayman Odeh and his 13 seats have been declared off limits as coalition partners.

That is, the bigotted Yisrael Beitenu can play kingmaker only because of its own racism and that of most of the other Jewish-majority parties.

Lieberman absolutely refused to serve in a government headed by Netanyahu because Netanyahu has in the past couple of years refused to launch a war on Gaza, while Lieberman is spoiling for a big military conflict.

So Netanyahu lost power because he was not willing to have Palestinian-Israelis in his government on the one hand but wasn’t willing to launch another massive war on Gaza Palestinians on the other.

Gantz, considered a centrist in Israeli terms though in most country he’d be considered pretty far right wing, could pick up Lieberman’s 9 seats for 42, leaving him needing 19. If he could get the leftists, the Labor Party (6 seats) and the Democratic Union (5 seats), that would get him to 53.

So some pundits are suggesting that 53 could be enough. Gantz couldn’t get the fundamentalist parties or the Likud to serve with the others. It would be a minority government.

But Ayman Odeh has offered to have the Joint List be a shadow supporter of a Gantz government, which would give him 66 seats if the Joint List consistently supported him. That is, Gantz could survive a Likud-initiated vote of no confidence.

One problem for Gantz in this unprecedented scenario would be that he would become at least somewhat beholden to the Israeli Arabs, who could just join a Likud vote against him and unseat him anytime they became really unhappy with his policies.

Israeli president Reuven Rivlin could shoot down the idea of such a minority government, in which case Israel would go to its third election in a year.

If the Arab-supported, minority Gantz government did become a reality, it would potentially mark a turning point for what I call Palestinian-Israelis (just as we in the US speak of Italian-Americans). They would have taken at least a baby step away from Jim Crow and Apartheid. A tiny baby step.

But it is very unlikely that even this development would halt Israel’s vast land-grab in the West Bank or succeed in securing for the 5 million Palestinians under Israeli military Occupation the basic rights of citizenship in a state.