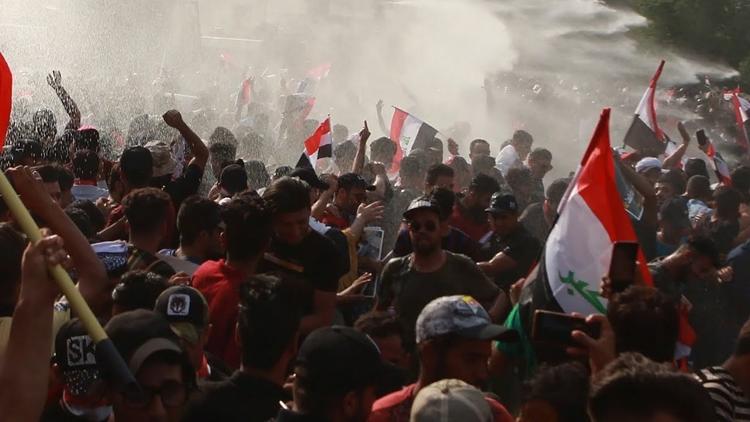 A third wave of protests in Iraq, following those in 2015 and 2018, continues to shake the three pillars of the regime — the constitution, electoral law and an independent judiciary — although protesters’ basic demands are not political. There is, nevertheless, a general conviction that they are impossible to achieve without a profound change in the so-called political process.

This is evident in the debate accompanying the demonstrations which has covered the need to review the pillars on which the state’s actions are based, and activate the decisions of the anti-corruption bodies. There is also a need to resolve the controversy over the duality of the military and security establishment with the Popular Mobilisation Forces, the umbrella of around 40 mainly Shia militias.

It is, therefore, a regime related crisis. It would have been contained if the government, political powers and the PMF’s Iranian backers had realised that the benefit and spoils system they have created has led to huge expenditure from limited budgets and neglect of the people, with all their sectarian and ethnic affiliations. Livelihoods have been subjected to the interests of a small minority.

Young Sunni Muslims and Kurds have not taken part in the protests as they feel that the authorities and political parties will simply exploit their participation for sectarian purposes. Primarily, this would be to bring an end to the protest movement, which is important to everyone on many levels.

In the summer of 2015, protests spread across Iraq, with the exception of Kurdistan and the Sunni areas that were under the control of Daesh. The heat drove people onto the streets, protesting against the government for failing to provide basic services such as electricity, water and healthcare. The corruption of the political class was also a target of the protesters, as were Iran and its interventions in Iraq. Iranian influence controls the main parties and their militias and protects their interests and control over the state institutions.

The protesters attacked the three-way ruling system of government, parties and militias, which they blamed for the deterioration of their lives. At that time, the parties rode the wave of popular resentment, and the Shia cleric Ali Al-Sistani intervened by adopting the citizens’ demands, blaming corruption and the corrupt officials. He urged the government to take action to correct the situation before people became desperate.

The then Prime Minister, Haider Al-Abadi, took steps to respond to the demands, but the political parties interfered and blocked his decisions. The protests died down, with no known central leadership to maintain the momentum.

It was a similar situation with the demonstrators in Basra last year, as their demands were also linked to the lack of basic service provision. This has been repeated with the latest protests in Baghdad and other provinces last week. The people did not go onto the streets for partisan motives.

However, the difference this time has been the use of deliberately excessive force by the authorities, and the anger among the protesters. Iranian media outlets justified the severity of the repression, saying that the Iraqi authorities feared a conspiracy against the regime or a military coup organised by the US and Israel. It was the Iranian media that first spoke of a third-party firing the shots which left dozens dead and wounded and exacerbated the crisis. At the same time, the same outlet was the first to announce that the authorities were able to thwart the “coup”.

It is known that the youth movement on the streets has been similar in all three waves of protests. It originated in the Shia environment that embraces the large parties and their militias which dominate the government and parliament.

It is thus significant that all of the protests have attacked the headquarters of those parties, especially the Dawa Party, and have always been filled with slogans against the whole corrupt system. This suggests strongly that the people of Iraq have become aware that the political parties have distributed offices and ministries amongst themselves and are using budgets to enhance their own influence.

Moreover, there is now an awareness that the same parties control the work of the government and its plans, and bear direct responsibility for the absence of a state for all. Iranian influence, meanwhile, manages the main parties and their militias, and plays a key role in protecting their interests and dominating the state. The protests have exposed the crisis in the integrity and independence of the regime in Baghdad.

The views expressed in this article belong to the author and do not necessarily reflect the editorial policy of Middle East Monitoror Informed Comment.