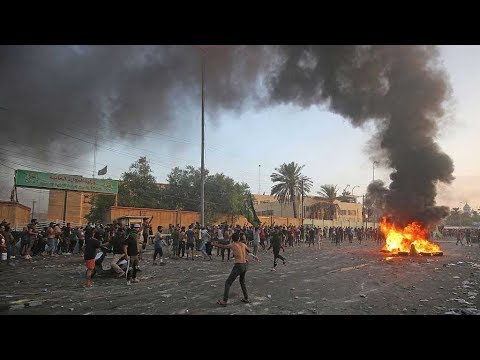 Ann Arbor (Informed Comment) – Protests broke out again in Baghdad on Saturday, leaving 15 dead. The government had shut down the internet a few days ago in a bid to quell the widespread rallies, but returned partial service yesterday, which allowed activists to call for further protests.

The Neoconservatives and the Bush administration pledged that if America invaded Iraq and reshaped its politics, it would become a shining beacon on a hill. Then it turned out that the Neoconservatives and the Bush administration could not find their asses with both hands, and left Iraq an enormous mess. (They also left the US an enormous mess by 2008 and our current crisis is rooted in their failures).

The government of Prime Minister Adel Abdul-Mahdi vastly over-reacted to the protests, using live fire in an attempt to disperse the crowds and wounding thousands of people. These tactics were intended to cow the protesters but had the opposite effect.

Abdul-Mahdi is in substantial trouble since on Friday Muqtada al-Sadr, the head of the largest party in parliament, the Sairun, joined the protesters in demanding that the prime minister step down. Al-Sadr, whose constituency lies in the Shiite slums of Baghdad and Iraq’s southern cities, had backed Abdul-Mahdi for prime minister despite his being from a party, the Islamic Supreme Council of Iraq (ISCI), which has splintered and which did not do well in the elections.

There is a provision in the Iraqi constitution for a vote of no-confidence that can be initiated by a petition of 50 members of parliament. Without the Sadrists, it is not clear that Abdul-Mahdi could survive such a vote. On Saturday, an attempt to hold a parliamentary session to respond to the crisis was thwarted when Al-Sadr’s party, Sairun, boycotted, and no quorum could be reached.

Abdul-Mahdi had been a Communist in his youth and then later on joined the Khomeinist ISCI. In the past 15 years he mellowed and became known as a pragmatist, even toward the United States. But he and his cabinet are still from the parties that came to power under Bush, and Iraqis are turning on them.

Popular discontent may have been artificially quelled in 2014-2018 because of the fight against ISIL, which wanted to kill as many Shiites as it could. But now that the terrorist organization is a shadow of its former self, discontents have come to the fore.

The current round of anti-corruption actions differs from anti-corruption drives of two and three years ago, which were organized in part by the Iraqi Communist Party and the Sadrists (fundamentalist working-class and poor Shiites who follow cleric Muqtada al-Sadr).

In contrast, these protests are actually targeting the major political parties that have dominated Iraqi politics since 2005 in the wake of the Bush administration’s 2003 invasion.

In the city of Nasiriyah and elsewhere in Dhi Qar province, crowds set fire to the offices of nine political parties and militia organizations, including those of the Communist Party of Iraq, the Badr Corps (a pro-Iranian militia-party), and the house of the member of parliament from Nasiriyah from the Da’wa Party, one of the stalwarts of the government.

The protests were set off last week when the government gave a desk job in the Ministry of Defense to popular war hero Abdul-Wahhab al-Saadi, who had been the number two man in the Iraqi Counter-Terrorism Service (ICTS). Al-Saadi had played a key role in defeating ISIL (the cult organization that styled itself the “Islamic State group”), and was known to avoid collaborating with Iran-backed Shiite militias. Al-Saadi is himself a Shiite, born in Sadr City and with roots in the Shiite south of the country. He simply is an Iraqi nationalist who did not want to be beholden to Iran or its Iraqi proxies. Likewise, Dhi Qar Governorate is almost entirely Shiite, but the crowds targeted Shiite parties and militias.

It has been estimated that between 2006 and 2014, $500 billion of oil sales receipts and foreign aid disappeared through some of the most massive corruption in history. Despite raising its oil production to 4.5 million barrels a day at a time when oil prices have firmed up, the government appears to be broke. Other oil states have sovereign wealth funds of hundreds of billions of dollars, and often hold similar amounts in foreign currency reserves.

The Iraqi government has zero zilch nada. I visited Baghdad in 2013 and it was like watching “Back to the Future” and going to 1985. In contrast to Doha, Dubai and Kuwait City, the Iraqi capital was almost devoid of new buildings and seemed worn down and dowdy, as though no investment had been made in its infrastructure or building stock in three decades. You had to wonder where all that oil money went. Saddam Hussein wasted a lot of it on ruinous wars with Iran and Kuwait. But after 2003 enormous sums came in, and it must all be in the Turks and Caicos Islands.

One report I read said that recently the price of tomatoes has jumped by 300 percent. Ordinary Iraqis are finding it difficult to make ends meet. The local leaders of political parties and their foot soldiers in contrast are living well at the public trough, which is why the crowds burned their headquarters.