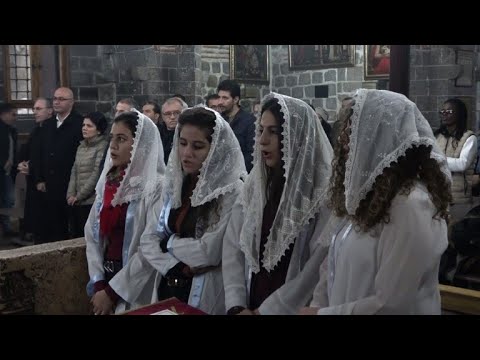 With this statement, Erdoğan might have hoped to send signals addressing western concerns about the vulnerabilities of Christians in his own country, too. The percentage of Christians in Turkey declined from nearly 25% in 1914 to less than 0.5% today.

As I write in my recent book on religious minorities in Turkey and France, international events and domestic political interests improved the status of Christians in the 2000s.

Yet, the current international and domestic context makes their future uncertain.

Christians have lived in the region that is modern-day Turkey since the first century when Christianity emerged.

Many Christians escaping persecution in Jerusalem fled north and settled in cities across western, central and southeastern Turkey.

Some of the Christian apostles traveled and even settled in regions in Turkey. These included Saint Paul, Saint Peter and Saint John. Saint Peter established one of the first Christian Churches and Saint John is said to have taken Virgin Mary to Ephesus, which is two miles southwest of present-day Selçuk in İzmir Province in western Turkey.

Constantinople, modern-day Istanbul, and Antioch, modern-day Antakya, in Turkey were two of the five centers of Christianity along with Rome, Alexandria and Jerusalem. Istanbul was long home to the largest cathedral in the world, the Hagia Sophia.

From its construction in the sixth century until the conquest of Istanbul by the Turks in 1453, Hagia Sophia served as a religious center for Eastern Christianity and the Byzantine Empire. The grand building became a mosque under the Ottomans and was converted into a museum in 1935 after Turkey became a secular republic.

Today, the Hagia Sophia remains a top destination for Christians and Muslims alike from all over the world.

Christians under the Ottomans

Under the Ottomans, who ruled Turkey and the surrounding region between 1299 and 1923, the government employed a multi-legal system to manage religious diversity.

While Muslims were in power, judicial autonomy was granted to recognized religious minorities, including Christians. They were allowed to decide civil matters such as marriage and inheritance through their own religious laws.

Christians, though, had an inferior position to Muslims during the Ottoman Empire, and were required to pay a special tax. Compared to religious minorities in Europe, however, Ottoman Christians were treated with tolerance.

To gain leverage against the European strategy, Ottoman sultans implemented new reforms in the 19th century. These reforms granted equal rights to Christians.

However, the reformist era did not last long. During the rule of the Ottoman Sultan Abdulhamid II, from 1876 to 1909, Christians felt alienated by pan-Islamist policies that pursued unity among Muslims globally. This was a departure from the sultan’s predecessors’ principle of equality between Muslims and non-Muslims.

The Young Turks, a group of reformists who overthrew Abdulhamid II and took control of the Ottoman state between 1909 and 1918, embraced a new form of Turkish nationalism that discriminated against non-Turkish ethnic and religious minorities. Their exclusionary policies went so far that they caused massacre of Armenian Christians during World War I.

Christians under the Republic of Turkey

After the disintegration of the Ottoman Empire after its defeat in World War I, the Republic of Turkey replaced it. The new state guaranteed the protection of the rights of non-Muslim minorities in the Treaty of Lausanne.

Yet Christians have seen discriminatory treatment in Turkey, especially during times of political conflict with non-Muslim countries.

In 1942, the Turkish state taxed the non-Muslim minorities with high rates. It deported those who were not able to pay taxes to forced labor camps in eastern Turkey.

In the 1960s, at the height of a dispute with Greece over the status of the island of Cyprus, the Turkish state confiscated some properties owned by non-Muslim community foundations. Later in 1971, it closed down the Theological School of Halki, an important school of Greek Orthodox Christians in the island of Heybeliada in the Sea of Marmara.

In the 2000s, the status of Christians improved thanks to Turkey’s efforts to join the European Union. Erdoğan’s Justice and Development Party won 2002 elections, and used Turkey’s European Union membership bid as an opportunity to expand political and civil freedoms. This move helped Erdoğan strengthen his position against the bureaucratic authoritarian institutions such as the army.

The European Union reforms undertaken in this era also improved the religious rights of Christians. The state returned their properties confiscated after the 1960s, the construction of churches in Turkey became relatively easier and the right to publish and broadcast in the mother tongue was expanded to include all minorities.

Before the reforms, only Armenian and Greek Christians, along with Jews, had the right to publish and broadcast in their languages.

The conditions that produced the reformist moment in the 2000s radically changed in the 2010s.

Erdoğan reversed the liberal policies that he once initiated and took a populist authoritarian path. The rising populist nationalism changed the reformist attitude toward Christian minorities.

Today, conspiracy theories about non-Muslim minorities dominate the public sphere. At the root of these stories, Christians are depicted as collaborators with foreign powers to undermine the Turkish identity.

Andrew Brunson, a U.S. priest who lived in Turkey for more than two decades, was arrested for being a traitor in October 2016 and released only after the U.S. intervened in October 2018.

Debates that are often part of the public conversation such as converting the Hagia Sophia into a mosque make Christians feel that their heritage is overlooked.

Turkey is an an important country for the history of Christianity, yet the future of Christian presence in Turkey, I believe, is under threat.

AFP News: “In South-East Turkey, all Christians pray under one roof”