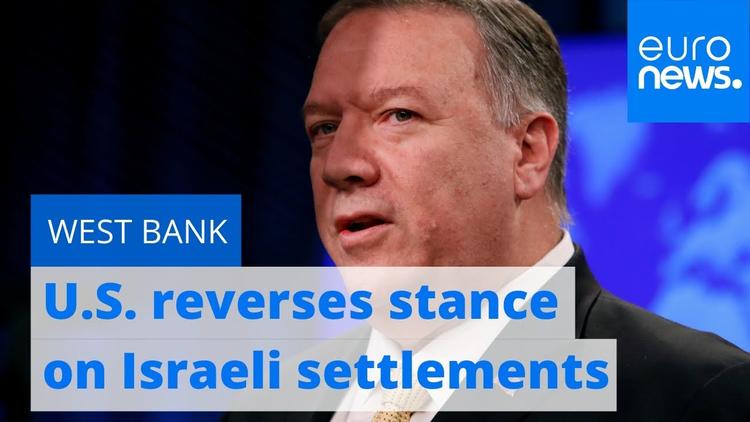 When US Secretary of State Mike Pompeo announced that the US government will no longer view Israeli settlements in the West Bank as illegal, it was a dramatic departure from the stance of previous US administrations.

His predecessors held to the State Department’s 1978 legal opinion that the settlements are “inconsistent with international law”. But on November 18, Pompeo said the settlements are a matter for the Israeli courts, with the US holding “no view” on their legal status.

Elsewhere, Israeli settlements are widely condemned because they impede the creation of an independent Palestinian state and hinder the chances of a two-state solution to the conflict. Their impact on Palestinians’ daily lives is no less serious.

The creation of the state of Israel in 1948 led to the exile and expulsion of at least 750,000 Palestinians, according to the UN. Two decades later, around 300,000 Palestinians were displaced in the 1967 War. Israeli settlement makes displacement a continuing feature of Palestinian life, with some families experiencing it repeatedly.

Settlements on the West Bank

The first settlements were built soon after the 1967 War, which saw Israel occupy the West Bank (including East Jerusalem) and the Gaza Strip. In subsequent decades, hundreds of thousands of settlers moved to the occupied territories. Their motivations include religious conviction, nationalist ideology and the economic lure of subsidised housing.

As a result, the settlements expanded across the occupied territory, with an infrastructure growing up around them.

While Israel unilaterally withdrew its 22 settlements from Gaza in 2005, along with four from the West Bank, it has continued to expand settlements. At the end of 2018, there were over 140 settlements and more than half a million Israeli settlers living in the West Bank.

The route of the infamous Israeli separation wall encloses most of these settlements. This lays the groundwork for their annexation, a policy Israeli Prime Minister Benjamin Netanyahu vowed he would pursue during campaigning for Israel’s September election. Meanwhile, peace negotiations between the Israeli and Palestinian leadership remain at an impasse, with no talks on the horizon.

The Israeli settlements go hand-in-hand with Palestinian displacement. Existing Palestinian communities have repeatedly been uprooted to create space for settlers. There is little clarity on the figures, with estimates ranging from 24,500 to 115,000 internally displaced Palestinians. Strikingly, Amnesty International found a correlation between accelerated settlement expansion and increasing rates of displacement.

Once settlements are established, settlers have exclusive access to roads and facilities from which their Palestinian neighbours are barred. Palestinian land has been regularly appropriated to create this two-tier infrastructure.

Many elements of the Israeli occupation of the West Bank are organised around maintaining the settlements. The resulting military and settler presence stops Palestinians living in 60% of the West Bank. Checkpoints and roadblocks, justified as necessary for the settlers’ security, also impose severe restrictions on Palestinian freedom of movement.

The displacement created by these settlement is especially loaded because of the long history of Palestinian forced migration.

Both the Palestinian refugees and the settlements are treated as “final status issues” in peace talks, meaning that they should be resolved as part of a comprehensive peace agreement. The future status of Jerusalem, claimed as a capital for both Israel and Palestine, also falls in this category. Since taking office, Donald Trump’s administration has sought to remove all three issues from the negotiating table.

First, Trump recognised Jerusalem as the Israeli capital and moved the US embassy there. He then withdrew US funding for the UN agency for Palestinian refugees (UNRWA). Trump’s senior adviser and son-in-law Jared Kushner went on to call for UNRWA’s abolition, advocating a reduction in the number of officially recognised Palestinian refugees from 5 million to less than 100,000.

Pompeo’s statement on the Israeli settlements marks the latest departure from previous anchors of US policy on the Israel-Palestine issue. By effectively endorsing the settlements, the Trump administration has signalled a green light for their continued expansion. As a result, further Palestinian displacement is virtually guaranteed.

There are signs of some international pushback against the direction of Trump’s policies in the region. The EU condemned Pompeo’s statement and, along with the UN, continues to maintain that Israeli settlements are illegal. No major world powers have followed suit in moving their embassies to Jerusalem. And despite calls from the US and Israeli governments to abolish UNRWA, its mandate was recently renewed until 2023.

Yet at the same time, the significance of the Trump policy moves on Israel should not be ignored. The US administration is empowering the most extremist elements of Israeli politics. In the process, it is enabling continuing rights abuses – and ultimately facilitating further conflict.