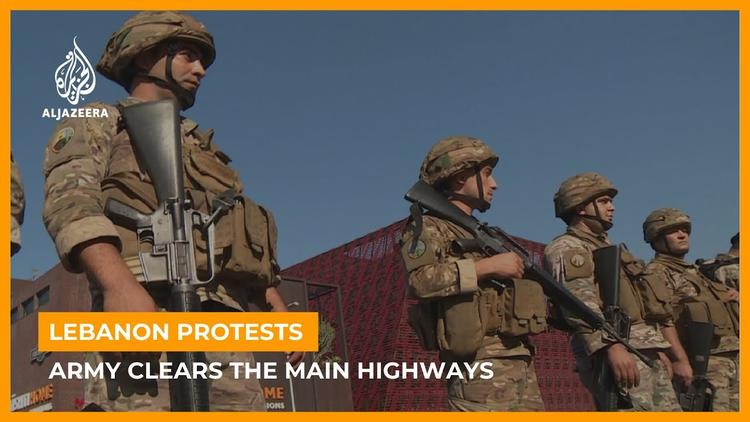 It is not only Iran that is paying close attention to the uprisings of the Iraqi and Lebanese people; Israel is also monitoring the situation closely, especially in Lebanon. It has also been involved in the Iraqi crisis recently and dealing direct blows to the Popular Mobilisation Forces and the Revolutionary Guard units, or so it claims. The two uprisings have attracted growing regional and international attention, and there are fears that the major protests will get lost in the conflicts raging between various axes and proxies in the region for at least the past ten years.

The Supreme Leader of the Islamic Revolution in Iran described the uprisings as “riots” and urged the people to respect the law and state institutions. I wonder if the Islamic Revolution itself would have broken out if the rebels had “respected” the law and institutions in Iran at the time. Furthermore, he said that the uprisings are “prompted” by Israel, the US and other countries, but would it be possible for them to get millions of young men and women onto the streets?

What Ayatollah Ali Khamenei did not say explicitly, one of his senior advisors said in all arrogance: The rebels should use the Popular Mobilisation Forces as a symbol and example and take action to seize the American and Saudi embassies. I truly do not know where he came up with this, or how he came to such a conclusion. Mohammad Shariatmadari was undoubtedly shocked that the rebels waved the Iraqi flag over the Iranian consulate in Karbala and did not respond to his revolutionary calls. This incident coincided with the 40th anniversary of the occupation of the US Embassy in Tehran and what became known as the “Iran hostage crisis”.

To be fair, Iran’s concerns, and those of its allies regarding the uprisings in Lebanon and Iraq are justified. The major forces in both countries are associated with Iran: the Popular Mobilisation Forces and their allies in Iraq, and Hezbollah and its allies in Lebanon. Hence, any destabilisation will cost Tehran its dominant position. The entry of “the street” as a new and serious player certainly changes the balance of power.

Moreover, Iran is right to fear that hostile states will ride in on the back of the two uprisings to defeat the Popular Mobilisation Forces, Hezbollah and other militias, if not by a knockout, then at least by points. However, Iran is not justified in accusing the peoples’ movements in Lebanon and Iraq of being prompted by foreign embassies and black ops. Iran does not have the right, under any pretext — including resistance, the most holy of pretexts in the eyes of many — to prevent the development of society and state in these two countries. Iran’s allies are either corrupt, as is the case in Iraq, or are protecting the corrupt allies, as is the case in Lebanon. Iran does not have to right to interfere, especially when its intervention goes against history.

We know that many Western and Arab countries are targeting Iran in Iraq and Lebanon. Major General Giora Eiland, Israel’s former national security adviser, says that his country has a rare opportunity to deal a crushing blow to Hezbollah, without having to enter into a costly war and an unaccounted-for gamble. What is required of Israel today, is to put pressure on Hezbollah by convincing international donors to require the movement’s disarmament as a condition for Lebanon to receive aid and loans. Putting pressure on Lebanese living standards and convincing citizens that Hezbollah is the reason for their hardship is the fastest way to delegitimise the movement and damage its popularity. This is the opinion of the retired Eiland, who came up with the regional territorial exchange project to resolve the Palestinian conflict.

The two blessed uprisings that erupted in Lebanon and Iraq are under fierce attack from the region’s rival forces. The fear that they will be diverted from their destination remains very real.