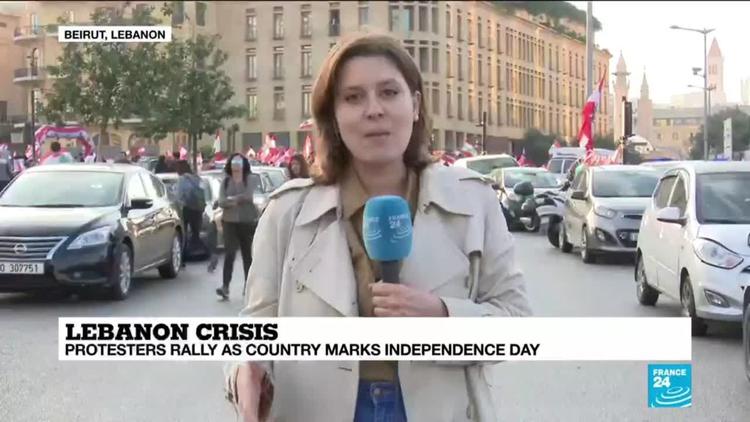 I am following Lebanon’s October Revolution from Vancouver. Between me and the revolution stand two continents, an ocean, a sea and a 10-hour time difference. However, the connections between me and what I watch on my screen render time and space irrelevant. In fact, the distance draws me closer to Lebanon and its revolution. What triggered the revolution is what caused and prolonged my distance from Lebanon: corruption, sectarian nepotism, and the impossibility of a desired future. Unlike today’s protestors, though, my own generation, having just survived 20 years of civil war, did not envision revolution as an option. Tired and tried, we just left when we could.

Watching students on social media protesting and chanting on Bliss Street, adjacent to the American University of Beirut campus — my alma mater where I spent six years — I was overcome with joy and pride at what has been emerging as a (renewed) student movement in Lebanon. Reminiscing online with a friend about our time spent at AUB, I commented that there was no way we could have done this. We were carrying the weight of the war, with its daily atrocities; we barely recognised ourselves, let alone each other. As I enrolled at AUB in 1990, General Michel Aoun had just been exiled to France after his unsuccessful war of attrition against Syrian troops in Lebanon.

At the time, we were still making our way from the Beqaa Valley to Beirut along the dangerous Karama Road, the only road to the capital via Mount Lebanon, passing through a myriad of checkpoints. We also passed through the southern suburbs, when Hezbollah and Amal were not on such good terms; armed men waving at cars to pass, or not, controlled the streets. Downtown Beirut was a ghost town, still standing as an eyewitness and a victim of the cruelty of the civil war. Our “downtown” was the Hamra area, and Beirut was still spoken of in terms of east and west. National reconciliation was still hard to envision as the wounds and scars of the war were too many, and borders, real and fictional, still too stubborn to erase.

Raised in the Beqaa Valley, Beirut exposed me to the outcomes and remnants of the war in an amplified and more intense way. The AUB provided the opportunities for new encounters and new experiences but those were still defined by the political landscape represented by the same political parties, and the ways they coalesced with or against each other. The Palestinian question stood at the crossroads of all of those parties endorsing it or resenting it. One political party in particular, Hezbollah, was relatively the newest on the scene but already part and parcel of the political landscape, and encapsulating the ideological complexity of Lebanon.

Those were the early 1990s. Both Hezbollah and Hamas were constantly making the headlines and stealing the limelight. They were the armed resistance against Israeli occupation. And it was a spectacular resistance. Hezbollah was going from one victory to another, while Hamas had inherited the flag of armed resistance from the inept Palestine Liberation Organisation.

Resistance had its idioms and language, as part of our daily culture. Fayruz, Ziyad Al-Rahbani, Ahmad Qaabur, Julia Butrus, Marcel Khalifa and others infused us with daily energy and a political language that defined resistance and patriotism, the latter conditioned by the former. They helped us stay defiant and on guard, and in total provided a cultural repertoire of resistance, especially when their songs reflected the intersection of Lebanon and Palestine. That repertoire was not exclusively Lebanese in origin; Shaykh Imam’s songs and Nizar Qabbani’s poetry were present, along with others.

That cultural repertoire of resistance, however, hardly connected Lebanon or the Lebanese to each other. Yes, we were connected to the occupied south but that line of connection also produced lines of disconnections between certain political parties, regions and ideologies. In the Lebanese context, resistance to occupation has been an ideological stand, not a national agenda (unless a consensus is needed for decorum).

Back to the 17 October Revolution, a different kind of resistance to a different set of issues, the cultural repertoire emerges as a cross-generational one. Songs of Julia Butrus, Marcel Khalifa and Ahmad Qaabur are heavily present, the last two appearing amongst protestors in person. Whether in the Beqaa or in Tripoli, crowds are chanting “Unadikum, ashuddu ‘ala ayadikum” (I call you, I hold your hands tight) with Ahmad Qaabur. Spending hours browsing the audio-visual manifestations and productions of the revolution, the songs are too familiar. I am hearing my generation’s songs adapted to a new form of resistance, one that is civil, unprecedentedly and authentically national, and addressing not foreign occupation but the essence of the Lebanese system itself: the sectarian one, and all the nepotism embedded within it. The cross-regional aspects of that resistance are also strongly present: Iraq, Palestine, Algeria and Syria are on the map of the revolution. Qaabur, addressing a crowd in Tripoli, dots Beirut, Damascus and Baghdad in one single line forming “one cry”.

However, the revolution has created its own novel cultural repertoire that has revealed the ability and the possibility of a Lebanese national unity, and with it an emerging conscience of a national (not nationalistic) Lebanese identity, in ways my generation neither experienced nor felt. We characterise national narratives as imaginary, as they often are, but a national narrative effected by an economic crisis with possible catastrophic outcomes, by political nepotism and by unashamed corruption is not imaginary. Disastrous governance rooted in and dependent on a crony capitalist-cum-sectarian system in Lebanon has generated a new political culture, exhibiting a genuine sense of a national identity and a civic citizenship that has shed or is ready to shed the sectarian robe. A national anti-sectarian identity has become the state emergency, the only fire exit.

This new nationwide sense of anti-sectarian citizenship is present everywhere in the streets and squares of the revolution, voiced by songs and chants repeated by protestors everywhere. This is perhaps best articulated by the content of the song dubbed as the revolution’s own: Thawrit Watan (“A Homeland’s Revolution”) produced by a band with a Sunni religious identification, Nujum Ghuraba’ lil-Fann al-Islami. Playing on the tunes of the soundtrack of Resurrection Ertugrul, a Turkish television series linking Turkish nationalism under President Erdoğan to its Seljuk roots — Turkic and Islamic roots, tied to the ancestors of the Ottomans — the Lebanese version is a national one par excellence, echoing the demeanour of the revolution itself. Borrowing words from the national anthem, citing the different Lebanese localities, from north to south and west to east, tying disparate regions together in one sentence (such as Tyre and Batrun), the song urges change and unity and calls for freedom, dignity and liberation through unity. It highlights the non-sectarian identity of the revolution, and demands the national flag raised as the only flag of the revolution. The religious identity of the band, its trope of alienation often associated with the term Ghuraba’ when used in a religious context, and the religious cross-regional affinity to Resurrection Ertugrul did not override the strong national framing and tone of the song. The state of Lebanon here is the identity, the affiliation and the priority.

Lunching at Al-Zaytuna Bay to reclaim a public space that had turned into a private bonanza and an exclusive space, protestors played on the words of one of Fayruz’s songs (شتي يا دنيي). They call for road closure, describe their acts as being in defence of the poor, and portray their revolutionary days as festive.

Bella Ciao, adapted as the anthem of the Italian anti-fascist resistance in the 1940s, is transformed by Lebanese artists into a Lebanese song of resistance and of the October Revolution. “Oh my people rise, this is our cause, burn the idols of politics that you created. Don’t lose your country and raise the flag of Lebanon,” are its opening lines.

Unlike Fayruz’s songs that glorified a folkloric Lebanon centred on Mount Lebanon, these new ones address a comprehensive national geography and highlight matters of urgent concern to all citizens. They do not manufacture a fictional national identity but perhaps for the first time in the history of the state of Lebanon, they render the fictional real and capture the revolutionary momentum that has forged an inter-sectional anti-sectarian identity across the whole country, incorporating gender and environmental rights and exhibiting hostility to neo-liberal capitalism. In the meantime, they echo the other layers and targets of resistance that seek a new model of government and of governance based on a civic definition of citizenship. This has become as urgent as national liberation from occupation.

Observing it all from afar, Lebanon is revealed to me in new colours and in a new shape. A different sense of belonging has emerged; one that is anchored in a genuine consciousness of a citizenship that can be and is liberated from sectarian cloaks. It remains to be seen if a political elite can emerge that allows such citizenship to materialise in constitutional terms. Equally important is for armed resistance not to pit itself against a civil resistance to a corrupt and now practically defunct sectarian system. For reasons beyond the scope of this piece, local and regional factors (and actors) may not allow the two to align. A zero-sum thinking about national priorities leaves no winner. Lebanon’s liberation from sectarianism at this juncture is no less urgent than its resistance to Israeli invasions. One is not at the expense of the other.

Professor Amal Ghazal is the Director of the Centre for Comparative Muslim Studies at Simon Fraser University, Canada.