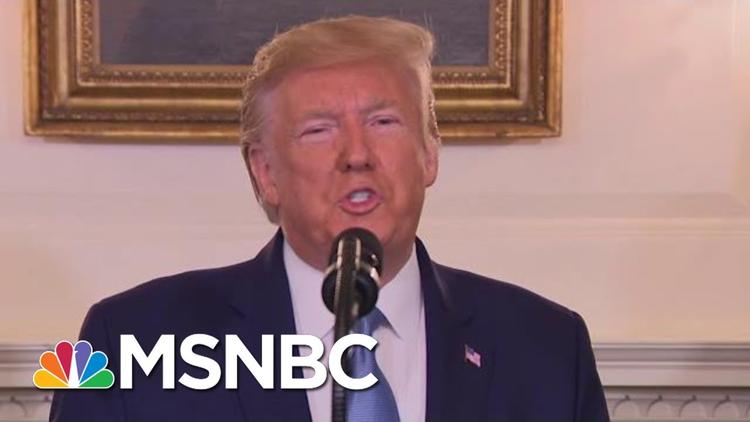 Ann Arbor (Informed Comment) – If we think about mass politics in the Middle East during the past 8 years as anti-corruption drives, it is easier to see the ways in which Trump resembles a typical Middle Eastern dictator. Americans are prosecuting him in the House of Representatives rather than in the streets, but then the House represents the American masses. Moreover, Americans opinion-poll their politicians into oblivion, and Trump has so lost key states like Pennsylvania that 57% there wants the impeachment inquiry. Some 59% don’t want him reelected anyway. Why stand outside in the street in the cold when you can deliver the message by Gallup and by congressional votes?

The vote in the US House of Representatives to set the rules on an impeachment inquiry for Donald J. Trump was handily won by the Democrats. It is fairly obvious that the Dems have enough hard evidence to proceed to an impeachment in the House (which is like a Grand Jury indictment– the real trial will be in the Senate and Trump is unlikely to be removed). Trump stands accused of corruption. He tried to involve a foreign power in a domestic US election, which is illegal. He also offered US government goods (and threatened to deny them) as a way of extracting a thing of value, i.e. Ukrainian oppo research, from the Ukrainian government. That is a form of bribery and is also illegal. This case is a slam dunk.

Likewise, since 2011, the crowds in the Middle East have used repertoires of street protest (and camping out in city squares) to challenge the rule of corrupt leaders who seemed to them to be standing in the way of their country’s progress. Egypt’s Hosni Mubarak, Tunisia’s Zeine el-Abidine Ben Ali, Yemen’s Ali Abdullah Saleh and Libya’s Moammar Ghaddafi were overthrown in the first wave.

In the past year, a new wave of mass protests has removed the war criminal Omar al-Bashir of Sudan, Algeria’s Abdelaziz Bouteflika, and Lebanon’s Saad Hariri. Bouteflika and Hariri were not dictators and rather came to power through highly flawed electoral processes. But they were still seen as part of governments that were unresponsive to the people’s needs and riddled with corruption.

Trump’s style is very much one that Middle Eastern crowds would recognize. Trump engages in nepotism, giving his daughter and son-in-law what are essentially high government portfolios. Hosni Mubarak in Egypt was setting up his son Gamal to succeed him, and his two sons were accused of profiting from their father’s position as president. Hmmm…

Sudan’s deposed president Omar al-Bashir is accused of taking $90 million from the Saudis, and even admitted to $25 of it. Millions were found stashed in his personal mansion. Al-Bashir’s crime most fits the one Trump is on trial for, since the Saudis gave that money to shore the president up and to help assure his longevity against potential rivals.

Algeria’s Said Bouteflika, the power behind his health-challenged brother Abdelaziz, has just been sentenced to 15 years for “conspiring against the state.” Like Jared Kushner, he had enormous influence on governmental policy without holding an official office.

Lebanon’s Saad Hariri was part of a government move to impose new taxes, including on Whatsapp smartphone messages. Then it came out that he had paid a South African model $16 million. The Lebanese were not amused. Their standard of living has been plummeting. Was Hariri paying her off for her silence the way Trump paid off Stormy Daniels and Karen McDougall (which was itself a violation of electoral laws for which he should have been impeached)?

Unlike Hariri, al-Bashir and Bouteflika, Trump almost certainly will not be made to step down even if the House impeaches. This is because the Republican Party has decided to put party loyalty above principle and to adopt the ridiculous position that Trump hasn’t done anything wrong.

Likewise, the ruling parties in Algeria and Sudan stuck with their guy to the bitter end. Egypt’s National Democratic Party was a creature of dictator Hosni Mubarak (its name was three lies– it was not national, or democratic, or actually a party). Only because the masses turned against their guy did military elites step in to insist they step down. Think about that. The US Republican Party is behaving like the toadying president-centered “parties” infesting the Middle East.