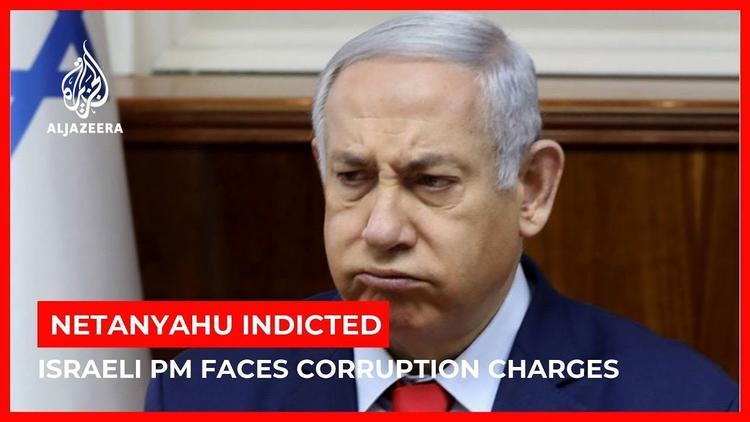 Israel’s attorney general has indicted prime minister Binyamin Netanyahu, Ari Shapiro and Daniel Estrin report at NPR, on charges of “bribery, fraud and breach of trust.” Israeli protesters against the far right and openly racist Likud leader have for some time chanted against him as the “crime minister.”

Netanyahu lost the most recent election, the second this year, and proved unable to form a government because the other parties all despise him and they all ostracize the Palestinian-Israeli coalition, which has 13 seats. Israel is going to a third election, and Netanyahu hopes to win this time so as to be able to use his position as prime minister to quash the indictment.

A government could have been formed by a coalition of parties if the Likud Party had been willing to dump Netanyahu as its head. But by now, many of the party leaders came to power on Netanyahu’s coattails and they could no more dump him than US Republicans can dump Trump.

Just to underline, a government could also have been formed if any of the Zionist parties had been willing to let the mainly Palestinian-Israeli Joint List come into their coalition. Some 20% of Israelis are of Palestinian heritage, and are excluded from cabinet posts by the Jewish mainstream. It is sort of as if no African-Americans were ever allowed by a US president to serve as secretaries of major departments and were excluded from the cabinet.

On the other hand, if Netanyahu comes back to power and sidelines the indictment through political means, that would be a huge further step toward authoritarianism and possibly the nail in the coffin of what little is left of Israeli democracy.

The indictments themselves speak to the ways that political corruption has corrupted and ruined Israeli journalism.

However, now that he is indicted, Netanyahu is abruptly facing challenges for leadership within his party. If a new party leader emerged, it might make it possible for a government finally to be formed.

I wrote on this issue earlier:

“Netanyahu is currently entangled in four political scandals: Case 1000 which involves allegations that the PM and his wife accepted illegal gifts from businessmen; Case 2000 which accuses Netanyahu of attempting to buy favourable newspaper coverage; Case 3000, also known as the “submarine scandal”; and Case 4000, in which a close associate of Netanyahu is suspected of providing confidential information to Israel’s largest telecoms company.”

I explained in more detail elsewhere:

The police instanced two cases, one in which Netanyahu allegedly accepted a couple hundred thousand dollars in bribes from an Australian businessmen in return for favorable treatment of his business and attempting to get him a US visa. (Whether Netanyahu regularly got people visas should be looked into as a form of corruption on the US side).

In my view it is the second case that is explosive. In the first one Netanyahu got champagne and cigars. But the second case shows how far right wing nationalist politics is intertwined with shady businesses like casino-owning and their ability, having bilked millions of poor and working people out of their money, to turn around and buy influential press organs to convince the latter to vote for the people who screwed them over. (Although Netanyahu is notorious in the West for having reneged on the Oslo Accords and having denied Palestinians their rights, within Israel he has also led an assault on the old socialist welfare state, throwing workers under the bus and diverting money to the billionaire class.) It is a perfect vicious circle.

According to BBC Monitoring, the police issued a statement saying,