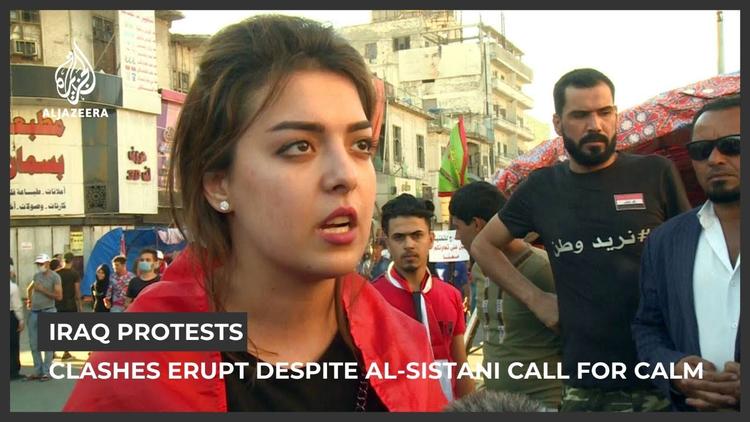 ( Niqash.org) – Behind the scenes of Iraq’s demonstrations, a decades-old rivalry between two centres of religious learning and authority, one local and the other in Iran, is playing out. 3.11.2019 Politics
Protests in Baghdad.

In early October, snipers shot at unarmed protesters on the streets of Iraq, who were taking part in anti-government protests. The snipers could be seen positioned on tall buildings, wearing masks and dressed all in black. It was immediately clear to almost everyone that they were not members of the official Iraqi armed forces.

Reuters reported that the snipers were deployed by the semi-official militias, even though militia commanders denied they had anything to do with the killings.

Later on Faleh al-Fayad, Iraq’s national security advisor and a former head of the militias, boasted that “we caused the conspiracy to fail”. His statement refers to the conspiracy theories that have been spread by some local politicians and by Iranian leaders that Iraq’s anti-government demonstrations are being led by “foreign” agitators, not aggrieved Iraqis.

The murder … serves our interests. The demonstrations are now contaminated.

Last weekend, protesters in the southern state of Maysan took out their anger on the same militias in the provincial capital, setting fire to the offices of the hard-line League of Righteous group and injuring one of the group’s leaders, Wissam al-Alyawi. The leader and his brother were later attacked while they were on their way to a local hospital, and eventually killed. Along with several other of the larger, better funded and armed militias, the League of Righteous militia is well known to be allied with Iran. They are often described as the loyalist militias

After al-Alyawi’s funeral, sources say that high-ranking militia leaders, army officers and senior government officials met in Baghdad. “The murder of al-Alyawi can be considered a turning point and one that serves our interests,” one of the militia leaders apparently said during the meeting. “The demonstrations are now contaminated, which means we can confront them.”

Over the past few weeks, the battles lines have slowly been drawn. Now they are coming into sharper focus. Protesters have been vocal in their opposition to Iranian interference in Iraqi affairs, burning Iranian flags and defacing posters of that country’s Shiite Muslim religious leader, Ali Khamenei. Meanwhile Khamenei, who is based in the holy city of Qom and who is often forceful in his pronouncements, has continued to push the idea that foreigners and “Western intelligence agencies” are instigating the protests. He has suggested that Iraqi authorities “make it a priority to stabilize these security threats”.

That same week, many Iraqis were also waiting to hear what the highest ranking Shiite cleric in their country, Ali al-Sistani, would have to say about events. Al-Sistani is based in Iraq’s holiest city, Najaf. One of the respected cleric’s representatives, Abdul-Mahdi al-Karbalai, eventually read out what many considered to be a fairly timid statement, cautioning protesters not to be violent and not to damage public or private property. No real reference was made to their demands.

The protests have taken on something of a festive air.

In fact, that is in keeping with al-Sistani’s attitude toward the role of religion in politics. Al-Sistani belongs to the quietist tradition of clerics and, unlike his Iranian counterpart, does not believe that religion should interfere massively in national politics or that clerics should appear often in the media. His reluctance to lead a religious revolution such as the one that occurred in Iran made him a target for criticism from over the border. Nonetheless there is also no doubt that al-Sistani plays a role in Iraqi politics and has always been a presence in national crises over the past decade.

In the end, it seemed that protesters mostly ignored al-Sistani’s speech, as they continued to try to get onto government property, to damage or burn political party and militia headquarters. In Baghdad, the Iraqi army used tear gas to prevent demonstrators from getting into the high-security Green Zone, and the Iranian embassy.

A cleric in Najaf with close connections to the important Shiite seminary, the al-Hawza al-Ilmiyya in Najaf, said that during the week, there was a series of messages coming from Iran to Najaf, where al-Sistani is based. The insider believes that these messages were pressuring al-Sistani to support the current Iraqi prime minister, Adel Abdul-Mahdi, to prevent him from being ousted, as per the demonstrators’ demands. The messages apparently also stressed that the protests be stopped.

However that has not happened and during the week, then again more definitively on Friday, demonstrations have continued. Prime Minister Abdul-Mahdi asked the country’s crack counter terrorism forces to help end the protests in Baghdad but, as one senior army officer told NIQASH, “there was a long debate about whether and how to do this”. The special forces have gained a fearsome reputation for the way they fought the extremist Islamic State group and are generally respected by the general public for this. The commanders were reluctant to squander that.

In the end, no aggressive tactics were possible: During the week, thousands of Iraqi school children joined the protests. Nobody wanted to be seen shooting at 12-year-olds carrying their school bags.

Over the week, many of the protests have since taken on something of a festive air. The Iraqi government has announced a variety of measures to try and satisfy demonstrators’ demands but it is hard to know whether they would be satisfied with anything less than the complete dissolution of the current government.

The size of the demonstrations, supported by all Iraqis and so spontaneously, gave al-Sistani the strength to withstand pressure.

All of this has left senior cleric al-Sistani in a difficult position. Although many of the young protesters have also talked about rejecting religious influence, there’s no doubt that al-Sistani still has a lot of authority – not necessarily to control them but rather to support them, which prevents elements in the Iraqi government or Iranian authorities from going too far.

Behind the scenes, he and his advisers seem to have come to a conclusion. This was clearly indicated by the fact that the religious students in the seminaries in Najaf were released so that they could take part in local protests. Two of Najaf’s important shrines also opened their doors to offer local protesters water and food. At one of Najaf’s mosques, clerics gave a speech criticizing those who had been in command of the snipers that had shot at unarmed demonstrators – that was a clear reference to Iran.

Later on in the week, on Friday, another of al-Sistani’s spokespersons gave a further speech in which he said that no international or regional actor had the right to impose their will on the Iraqi people – another obvious reference to the Iranians. The speech also carried warnings about excessive violence from official or unofficial security forces, meaning the militias, many of which are under Iranian influence. Even though many of the militias fighters in Iraq are supported by Iran, they would also heed al-Sistani’s words.

“The size of the demonstrations, supported by all Iraqis and so spontaneously, gave al-Sistani the strength to withstand pressure,” a cleric close to the religious leader told NIQASH. “In his speech, al-Sistani didn’t mention political decisions though because he believes the demonstrations are going to continue and it is too early to talk about the political situation.”