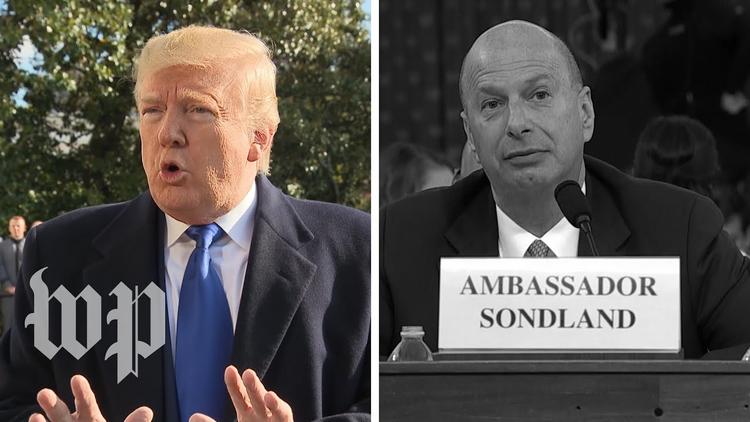 1. No quid pro quo (“this for that”). The Republicans, and Trump himself, kept asserting that the president didn’t offer a bribe. That is, he didn’t ask Ukraine for a thing of value in return for his bestowal of some favor on Kyiv. It isn’t necessary for Trump to have sought a thing of value, mind you. Just asking the Ukraine to interfere in the 2020 presidential campaign by investigating Joe Biden’s family is a crime in the Federal code. But there is now proof that there was an attempted bribery.

According to Rachael Bade, Aaron C. Davis and Matt Zapotosky at WaPo, Ambassador Gordon Sondland testified Wednesday, that Trump proffered a thing of value, i.e. a Rose Garden appearance with Ukrainian president Volodomyr Zelensky. Sondland said forthrightly, “I know that members of this committee frequently frame these complicated issues in the form of a simple question: Was there a ‘quid pro quo?’. . . With regard to the requested White House call and the White House meeting, the answer is yes.”

Zelensky desperately needed the meeting with Trump to demonstrate that US support for Ukraine remained strong, in the face of the Russian incursion into East Ukraine and the Russian occupation of Crimea. In return, Zelensky had to make a public statement that the state prosecutor was investigating Hunter Biden and Burisma, the natural gas company on the board of which he served, for corruption. Apparently Zelensky had planned to do this on Fareed Zakariya GPS on CNN, but dropped the plan when the whistleblower complaint became public and Politico disclosed that Trump had held up aid to the Ukraine.

Sondland also testified that he was directed by Rudy Giuliani, Trump’s personal attorney, in a scheme to deny the military aid appropriated for Ukraine until the Biden investigation was announced by Zelensky.

2. Also on Wednesday, Laura Cooper, the deputy assistant secretary of defense for Russia and Ukraine, testified that the US received an inquiry from Ukraine on July 25 about where the security assistance from the US was. So report Natasha Bertrand, Nahal Toosi and Caitlin Oprysko at Politico.

Cooper said, “My staff showed me two unclassified emails that they received from the State Department . . . One was received on July 25th, at 2:31 P.M. That email said that the Ukrainian embassy and House Foreign Affairs Committee are asking about security assistance.”

Republicans have attempted to maintain, rather ridiculously, that Ukrainian officials did not know that they were being denied military aid. They are at war. They would notice running out of bullets.

Cooper’s testimony went a long way toward shooting down that GOP talking point.

I wrote in September, “

So bribery is an impeachable offense.

“The President, Vice President and all civil Officers of the United States, shall be removed from Office on Impeachment for, and Conviction of, Treason, Bribery, or other High crimes and Misdemeanors.

Philip Bobbitt, of the Columbia University Law School, pointed out a couple years ago at Just Security that bribery is actually two possible offenses here. One is to accept a bribe. The other is to offer a bribe . . .

I think it could also be argued that Trump was soliciting from Zelensky a thing of value, i.e. oppo research of the sort political campaigns routinely pay investigative firms for.

The US civil code says,

So Trump may have broken two laws . . . One was to offer Zelensky a bribe, which is explicit constitutional grounds for impeachment.

The other was to solicit a campaign contribution of sorts from a foreign national. Surely that would fall under “high crimes and misdemeanors.”

3. The Republicans keep saying that none of persons giving testimony are eyewitnesses to Trump’s personal involvement. This is silly, since Trump released a partial memorandum of his conversation of July 25 with Zelensky, which makes it crystal clear what was going on, and is an eyewitness (if incomplete) document.

But in addition, David Holmes, the political counselor at the U.S. Embassy in Kyiv, Ukraine, reported:

After the final meeting, Holmes and Sondland went to lunch, along with other State Department staffers. During the lunch, Sondland placed a call to Trump on his mobile phone and announced multiple times, “Gordon Sondland holding for the President.” Holmes could hear the president’s voice through the earpiece; Sondland held the phone away from his ear during the first part of the phone call, and Holmes believed this was because Trump’s voice was very loud on the other end.

Sondland indicated that he was in Kyiv and that Zelensky “loves your ass”—that is, Trump’s. Holmes then heard Trump ask Sondland, “So, he’s gonna do the investigation?” Sondland replied that “he’s gonna do it,” adding that Zelensky will do “anything you ask him to.”

This report demonstrates that it was Trump who sought the Burisma investigation to harm Biden.

“Trump’s assertion that there were recordings of former Vice President Joseph R. Biden Jr. discussing Ukraine corruption” and “an explicit mention by Ukraine’s president … of Burisma Holdings, the energy company whose board employed Mr. Biden’s son Hunter,” per the Times.”

These details, although Vindman played down their significance, actually give away the whole show. They show that Trump specifically brought up Joe Biden in the call and that Zelensky knew exactly which investigation Trump was asking for, i.e. the one into the Bidens at Burisma.

Republicans, including Trump, kept saying “read the transcript” as though it were exculpatory. They implied that the memorandum is a verbatum transcript and a complete transcript, at that. It isn’t. They also kept questioning whether the bribe Trump was offering even specifically referenced the investigation of Hunter Biden. It did.