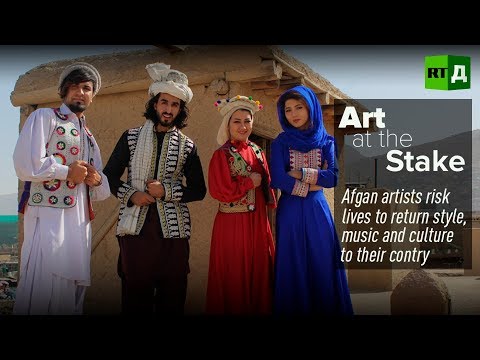 Omaid Sharifi is a pioneer Afghan activist and one of the co-founders of ArtLords, an artist association which has been attracting widespread international attention in recent years.

How did you start your career as a painter and artist?

I am not an artist. I call myself an “artivist.” We combine art with activism. What we do is not really art or activism only: it is a mix of both. We are using art for a purpose. We are using art as a tool for social change, for critical thinking, and as a tool to change attitudes and behaviors. We are using art to fight corruption, and to counter violent extremism. All of that is sort of a new medium for artists and activists in Afghanistan, especially using street art, like theater, murals, graffiti, music. Five years ago I started this “artivist” movement with a couple of friends. some of them have left the country, but some of them are still here.

With love ❤️ from Afghanistan ?? pic.twitter.com/So8j2xqfzN

I started working at 12-years-old, selling cigarettes on the street. I remember this city being a beautiful capital with fine architecture. But over the last decade the government built big, ugly concrete blast walls in the city. It feels like they have taken space which belongs to me and to every citizen of Kabul and made the city look like a prison. So we decided to go out there and reclaim our space by painting these big blast walls.

One of the campaigns from ArtLords is called “Heroes of the City.” You portray everyday heroes on the blast walls. What is this about?

If you look at Afghanistan’s history, the heroes of Afghanistan always had guns, swords and all of these heroes were violent men. We have very few women heroes in our history. Those violent figures are not my heroes, which is why we decided to introduce a new narrative. No one has to follow an imposed hero. We invited people to choose heroes themselves.

A rain of tulips on Kabul’s anti-blast walls. One tulip for every victim of a 4 decade long war. This is how #ArtLords are trying to turn victims from numbers to humans. Hoping for peace to come (soon) for the people of this beautiful country pic.twitter.com/0dswYSBiWu

For me, for example, my hero is an afghan soldier who has the commitment and bravery to stand up against global terrorism and protect the Afghan citizens, though he is only paid a couple hundred dollars a month. My hero is a municipality worker who cleans up Kabul city, which has over five million people, with only a hundred dollar a month salary. My hero is a woman, who teaches at a remote area of Afghanistan with very limited resources and salary. My hero is an historian, my hero is an artist. These are the new heroes we are introducing to the people.

Ethnic conflict is considered to be a crucial social problem in Afghanistan. What are your thoughts on this and do you approach ethnic conflict in your work?

I do not think that we have an ethnic problem. We have not been in this conflict for a long time. Afghanistan is a very diverse country, over 22 tribes or ethnic groups live here. They have lived together mostly in harmony since a long time ago. The least I can say is that they respect each other and they know that everybody is a reality in this country and that they have to tolerate and compromise.

The conflict what is happening, like when it comes to attacks against Shia or other religious groups, it is something imported from other countries and by terrorist groups. We have many murals which encourage people to compromise, to stand in unity and for empathy, love and kindness.

With ❤️ from #Afghanistan pic.twitter.com/ly31SzaLb5

We have an office in Kabul and in four other provinces of Afghanistan. But we have worked in 20 provinces and done over 1,700 murals, covering almost 60 percent of Afghanistan in total. We have been to the most dangerous provinces in this country, and people there were able to see for the first time that there is art happening and they can be part of it.

In terms of the reactions, in Kabul and the most populated areas like Nangarhar, Kandahar and Herat, which are more exposed to internet, social media, TV and radio, they are more open, and I would say they are more aware of what murals and graffiti are and have more understanding of what we are doing. But it is different in remote areas where they do not have access to a lot of information.

There is the province called Zabur in the very far corner of Afghanistan, we went there and painted a mural about Polio vaccinations people must get for their kids and invited community members to also be part of the mural. Although the people in remote areas understand less of our work, they are still very keen and curious and try to understand our approach. In short, the reaction is varying, but people love it, they want to be part of it and we experience tremendous support from all the citizens of Afghanistan.

Your work is very progressive and it might even be understood as provocative as well. Have people or even Taliban tried to destroy your murals?

The work we do is unique and very new, and it always takes time for things to work out. Whatever new things you are testing out in Afghanistan, it always needs a while for people to accept it and to cherish it. I think we are very lucky that our work is appreciated and accepted by the community.

But on the other hand, we always face challenges because we are living in the most dangerous country in the world. We have forty years of war, there are at least twenty-two terrorist organizations in this country and people die by the hundreds every single day.

So it is not without its challenges. Yes, we do receive hate messages. Some people label us, call us infidels, CIA spies, anything to discredit us. Sometimes people claim what we do is against the Sharia law. But these are the realities of Afghanistan. It might only be a very small portion of the population who react like this. We will continue our work because we believe in our work.

We started the “Letters of Pain” campaign because I think most of the younger generations in Afghanistan do not have any voice in what is happening in this country. But we are actually a country where the majority of the population is very young. We are the second youngest country in the world, but this young population feels irrelevant and not engaged.

With love ❤️ from #Afghanistan pic.twitter.com/QowJcClB5i

So we thought, the best way to engage them and to hear their voice is to encourage them to write. Those who cannot read and write can send their voice messages to us, just to make sure we can hear them. We incorporate their ideas, their suggestions for solutions, their fears, and let the government, the international community, and everybody hear those voices. I led the project in Kabul in seven locations. It went very well, we received more than 300 letters, and now we are deciding to do this in seven more provinces.

There were many discussions and security concerns before the presidential election on September 28th this year. You were one of the supporters of the election. You even painted a mural to encourage people going to vote. What are your thoughts on this election?

For me, the bottom line is the republic and the Afghan constitution. In the last 18 years, we have lost so much. We have sacrificed so many human lives to have these achievements, to have this constitution, to practice our rights for democracy. And these achievements have not come easily. Although they might not seem like much, we have paid a massive price for these achievements. That is why we have to continue this process. One of the main elements of this democratic process is election. Before the election’s day, we painted a big mural to encourage people to come together, to accept each other, to embrace each other, to have empathy for each other, and then go and vote with love.

Myself, I woke up in the morning, and despite the direct threats from the terrorist groups against polling stations and the people who were going to vote, I went out, I drove my car, I voted, and I encouraged other people to vote as well. I think voting is a responsibility. The election commission now has the responsibility to make sure our votes are counted with transparency and accountability.

Are you concerned about the potential withdrawal of the US forces?

Well, we are concerned, because the Taliban and the Americans are talking. The Afghan people and the Afghan government, we didn’t know anything about it, until president Trump tweeted. It is always concerning, because it is about the future of a nation, it is about millions of people. We want a peace process which is owned and led by us, by Afghans, because we have been suffering in this war more than anybody else.

The consolation process takes a long, long time and we will be the ones who will carry out the possible options. We are concerned, but at the same time, we understand this is the process and we hope that it finds a solution for this country.

Via Heinrich-Böll-Stiftung: The Green Political Foundation

RT Documentary: “Art at the Stake. Afghan artists risk lives to return style, music, and culture to their country”