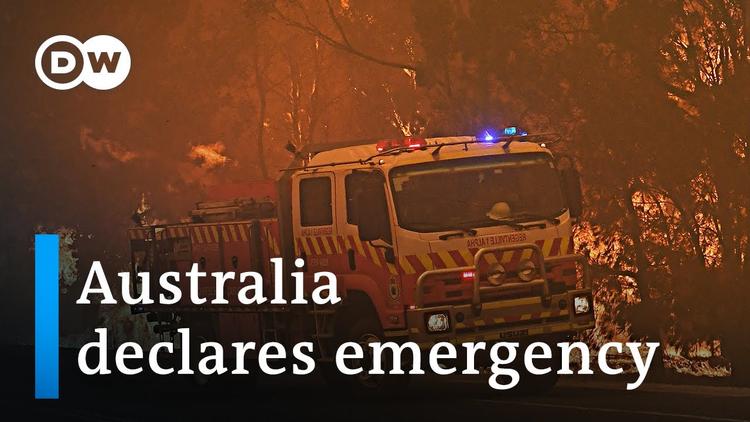 Ann Arbor (Informed Comment) – Australia has been turned by the climate crisis into a huge oven. On Wednesday, 14 of the hottest places in the world were in Australia.

Firefighters are combating 100 wildfires in New South Wales (NSW), with some of them encroaching on Sydney, Australia’s largest city. NSW declared a 7-day state of emergency.

Prime Minister Scott Morrison, who denies the human-caused climate emergency, initially thought this would be a good time for a vacation in Hawaii, but a public outcry made him cut his trip short. I guess the attitude of Anglo-Saxon ruling classes is that as long as they can fly off in private jets to some place less unpleasant, let the poor saps at the bottom take the heat waves, wildfires, and floods on the chin. The profits from hydrocarbons that feather their nests are more important than the welfare of the mere people, I suppose.

Some 800 buildings have been lost in New South Wales< with many more threatened, and firefighters are being treated in hospital for severe burns.

The continent-wide average temperature on Wednesday, of 107.4° F. (41.9° C.), the hottest in recorded history, broke the record set just on Tuesday. That was the average, which means there were places substantially hotter than that.

The world temperature has risen by 1.8° F. (1° C.) over the past century because of human beings driving gasoline cars and heating buildings with coal and gas. Climate is measured in long-term changes of patterns, not in specific events. The question is not whether global heating affects these extreme weather events, but the size of the contribution it makes to their intensity and frequency.

Hotter average temperatures have contributed to greater dryness in Australia and to easier combustion of bushfires. As the climate has been changed, cool summer rainfall has decreased, which makes bush fires more likely.

Australia is a major exporter of coal and other hydrocarbons, and with 0.7 percent of the world population is responsible for 5% of carbon dioxide emissions if exported fuels are counted. That is staggering.

Fires and a reocrd breaking heatwave in Australia | DW News