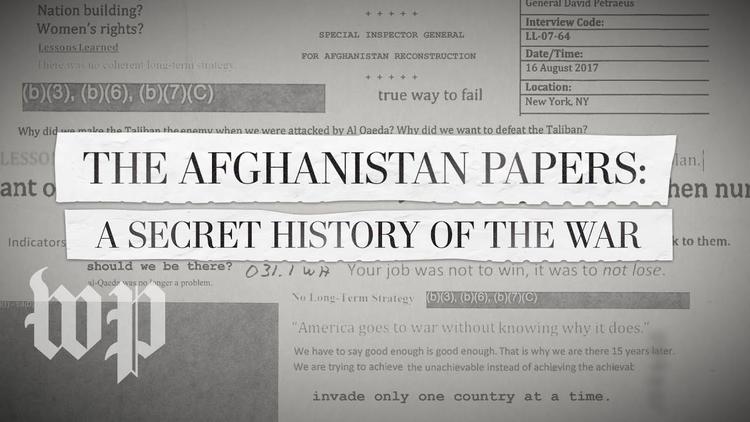 Ann Arbor (Informed Comment) – Craig Whitlock at the Washington Post brought out a blockbuster report Monday on the lies US government and military personnel have been telling the American people about the Afghanistan War since 2002. The Post also published 611 of the primary documents here.

A lot of the reporting off Whitlock’s article has focused on US government lies and misrepresentations about so-called progress on the war front. But that was all along obvious to anyone who knows anything serious about Afghanistan and Pakistan.

Our Madison Avenue advertising culture gives the US government the tools to pull the wool over people’s heads. Government spokesmen on the Forever Wars just have two categories, “progress” and “slow progress.” An epochal disaster like losing a whole province is “slower progress than we would like.”

The rules of formal American journalism favor the Progress Flacks, since if the president or his spokesman says something at a news conference, that is Important and goes first, and the journalists are not allowed to point out that what was said was an obvious lie lest their impartiality be questioned. Good journalists may quote an opposing view, but it will come late in the column after the readers’ minds have already been made up for them.

But mostly US news organizations slighted Afghanistan as a news story. How many segments on the war does CNN do a year? 8? How many times has Afghanistan been on the front page of the Post or the Times? Yet we have thousands of troops still there being asked to risk their lives. The Afghanistan War, the longest in US history, has been fought in a fit of absent-mindedness.

I have been covering the Afghanistan War at least from time to time since 2002, and nothing in the Washington Post expose surprises me in the least.

A problem is that the US never understood the full implications of the ethnic divisions in the country. The Bush administration installed in power the Northern Alliance in 2002, consisting of Tajiks, Hazara Shiites and Uzbeks. The Taliban was a largely Pushtun phenomenon, and they and the Pushtuns were defeated. The Pushtuns had been the ruling group in the country, despite being only about 44% of the population, for centuries. The Afghanistan National Army built by the US and NATO had difficulty getting buy-in from some Pushtun provinces.

I can remember when Gens. David Petraeus and Stanley McChrystal were doing experiments in counter-insurgency in Afghanistan back in 2010. They took a Pushtun area from the Taliban and then were going to bring down from Kabul “a government in a box” (as if Kabul had a government, much less extra ones to export). Then I read incredulously that they sent a Hazara Shiite general down to review the situation. Pro-Taliban Pushtuns tend to look down on Shiites, and having a Hazara Shiite general lording it over them would just about in and of itself ensure the failure of counter-insurgency.

I wrote for Memorial Day, 2018, using information published by SIGAR (the congressionally mandated watchdog agency that covered waste in Afghanistan; it gets a hard ride in the WaPo article, but I read their dispatches religiously and it was clear what they were saying):

“The Afghanistan government controls only about half of Afghanistan, 229 of 407 districts.

Maybe because it is a bad news story, our Afghanistan War, the longest in our history, keeps slipping our minds, along with thoughts of the Americans still fighting there.

The Special Inspector General for Afghanistan Reconstruction, or SIGAR, has issued a report concluding that after 17 years, US stabilization efforts in Afghanistan have failed. It is a sad conclusion but not surprising if you have been reading SIGAR’s regular reports of misspent money and corruption.

” Between 2001 and 2017, U.S. government efforts to stabilize insecure and contested areas in Afghanistan mostly failed.

The U.S. government overestimated its ability to build and reform government institutions in Afghanistan as part of the stabilization strategy. During the 2009 Afghanistan strategy reviews, President Obama and his civilian and military advisors set in motion a series of events that fostered unrealistic expectations of what could be achieved. They also ensured the U.S. government’s stabilization strategy would not succeed, first with the rapid surge and then the rapid transition. Under immense pressure to quickly stabilize insecure districts, U.S. government agencies spent far too much money, far too quickly, in a country woefully unprepared to absorb it. Money spent was often the metric of success. As a result, programming sometimes exacerbated conflicts, enabled corruption, and bolstered support for insurgents.

I went on to complain that the deaths of US service personnel in Afghanistan were not, as they should have been, front page news. That one is on WaPo and other newspapers.

Nor have I been taken in by the sunny and false pronouncements of the US spokesmen on Afghanistan.

I wrote at CNN in late 2012, just about exactly 7 years ago, when the US still had 68,000 troops in that country along with some remaining ISAF (NATO) contingents , that:

“By summer of 2013, it is anticipated that the U.S. combat role in Afghanistan will draw to a close. By the end of 2014, only a few thousand U.S. troops will be left, and they will mainly supply close air support to the Afghanistan army when it engages in combat. Whether the some 350,000-strong Afghanistan security forces are up to the challenge of fighting the Taliban and other insurgents is a matter of great controversy. American officers in Kabul insist that the Afghanistan National Army (ANA) now takes the lead in 80 percent of operations against the enemy, up from 50 percent just last summer. But a recent Pentagon review admitted that only one of 23 ANA brigades is capable of functioning on its own, without U.S. or ISAF help. In 2012, some 300 were dying every month in battles with the Taliban and other militant groups. The ANA has low rates of literacy ([at 10%] a third the rate of the general population), high rates of drug use, and high rates of desertion. It is also disproportionately drawn from the Tajik, Dari Persian-speaking minority. Only 2 percent of the troops hail from Kandahar and Helmand Provinces in the Pashtun south, the strongholds of the Taliban.”

My skepticism in 2012 has been more than borne out. I take no pleasure in saying so. When the US finally does get out of the country, which Trump desperately wants to pull off, my guess is that Kabul would fall within a year.

Washington Post: “Exclusive: A secret history of the war in Afghanistan, revealed”