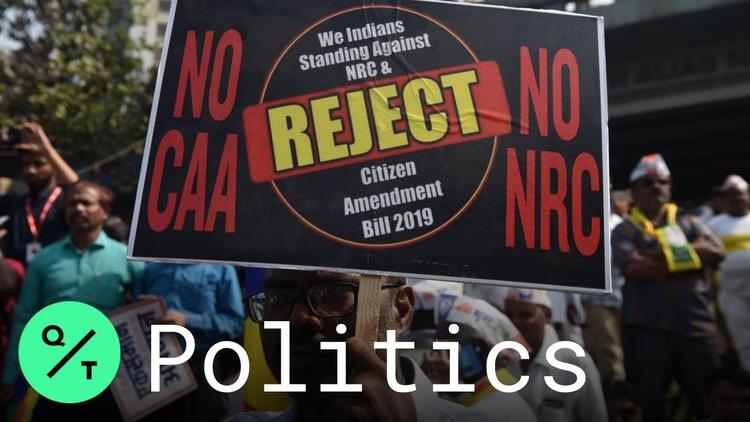 ( Middle East Monitor ) – In their quest to refashion India as a Hindu state, Hindutva extremists have placed themselves on a collision course with the country’s secular constitution. Their goal is no less than the reformation of India as an ethno-religious state affording special rights and privileges to Hindus within a multi-tier system of citizenship. The model state that they aspire to replicate is Israel.

The Zionist state has become an aspiration as much as an inspiration for far-right nationalists around the world, India included. Founded to protect the exclusivity of one ethno-religious majority over everybody else — especially the indigenous population — Israel is looked upon with envy by the likes of white nationalist Richard Spencer. The far-right extremist, who once described himself as a “white Zionist”, praised Israel gushingly following its adoption of the Nation-State Law last year, which declared Israel to be a state of the Jewish people only. The bill was criticised strongly for relegating non-Jews to secondary status in a move akin to the US or Britain declaring themselves to be “white, Christian” nations by law.

Israel’s ability to pass itself off as a democracy despite relegating minorities to second-class status has a special appeal for ultra-nationalists. Its strength as a highly militarised nation, able to maintain an apartheid system without suffering any consequences on the international stage, has a unique attraction. The success of the Zionist state has turned what were once ultra-nationalist fantasies — which many thought, mistakenly, had been relegated to the dustbin of history — into a realistic political vision in a world beset by fear and conflict.

In fact, far from being a democracy, Israel is unique in the way that it has created a multi-tier citizenship modal within the state for the purpose of maintaining its Jewish character. A number of laws have been enacted to build the state around institutionalised discrimination. The 1950 Law of Return, for example, incorporates the fundamental ideology of Zionism: all Jews, no matter where they were born, have the inalienable right to migrate to Israel. It’s easy to see why ethno-nationalists across the world would like to see this replicated elsewhere.

The 1952 Law of Citizenship (better known as the Nationality Law), meanwhile, gives all persons who are accorded Jewish nationality in the above Law of Return the right to claim Israeli citizenship automatically upon arriving at Ben Gurion Airport, Tel Aviv, without any formal procedures. The same law, however, stipulates specific protocols for non-Jews who wish to have citizenship.

Right-wing nationalists find Israel’s extraterritorial notion of sovereignty appealing. In this form of political order, citizenship is granted to anyone sharing the same ethnicity or religion, regardless of where they live in the world. In Israel’s case, only Jews are granted nationality rights, while non-Jews residing in the same territory are deprived of such rights.

Unlike liberal democracies in the West, Israel upholds a constitutionally-imposed distinction between “citizenship” and “nationality”. Only Jews are granted nationality and able to enjoy the full spectrum of rights granted by the state. An odious system of delivering state benefits is used in order to foster an impression that Israel is not discriminating against non-Jews.

The separation of services between “national” institution and “government” institution allows for the legal siphoning-off of resources to provide services for Jewish citizens only. For example, institutions financed by Zionist groups such as the Jewish National Fund can and do discriminate openly in favour of Jews without seeming to taint the apparently democratic government with the stench of racism.

This kind of Jew/non-Jew bifurcation of public services denies non-Jewish citizens of the state from accessing funds and services open to Jews only. With 92 per cent of the land of Israel “owned” by the JNF, much of it expropriated from Palestinians, non-Jewish Israeli citizens are deprived of access; they are unable by law to own, lease, live or work on it.

Israel is thus a model to imitate as far as Hindutva ideologues are concerned. Guided by Prime Minister Narendra Modi, Hindu nationalists seek to “Israelify” India into a racialised state. Their reasoning is simple: if Israel is accepted as the “only democracy in the Middle East” despite its many apartheid policies, then why can’t India continue to claim to be “the largest democracy in the world” while becoming an ethno-religious state?

Such a project is fraught with danger. The Hindutva vision for India is almost certain to stir up the demon of communal strife, the like of which led to the killing of millions during the country’s partition and independence in 1948.

Unlike Israel, which was founded on ethno-religious tribalism — rather like Pakistan — Hindutva ideologues have to abolish the country’s secular constitution to realise their vision. The conceptual shift made possible through propaganda and rhetoric has been underway for some time, with some of the worst dehumanising language being used to describe Indian Muslims now becoming socially and politically acceptable.

Indian ministers have fuelled anti-Muslim hostility by demanding the reduction of legal protection for minorities and suggesting that western standards of human rights are somehow not compatible with India. A similar argument was made by US Secretary of State Mike Pompeo in defence of Israel’s right to continue its annexation policy by disregarding the human, civil and political rights of Palestinians and insisting that applying international law to the situation in Israel-Palestine simply isn’t feasible.

Of course, just as there are anti-Zionist Jews who challenge Israel with regard to its discriminatory policies, not all Hindus endorse Modi’s racist political project. Indeed, many denounce Hindutva’s ideology as a malign distortion of Hinduism itself.

However, as is often the case in such ideological battles for hearts and minds, moderate voices are drowned out by the roar of fanatics seeking to recreate what they envisage to be imagined past glories. Spurred on by the global paralysis of support for human rights and the growing disregard of international law, despots, autocrats and ideologues of all political and religious backgrounds are seizing this moment to push the boundaries of what is and isn’t acceptable.

Beyond the rhetoric, measures are underway to change the face of India. Amongst the inflammatory steps taken by Modi since his re-election in May is the push for new legislation, the Citizenship Amendment Bill (CAB). This controversial move, which threatens to demote the status of the country’s two hundred million Muslim citizens, sparked protests across the country recently; at least 20 people have been killed in clashes with the security forces.

Netanyahu and Modi: Kashmir and Palestine are punchbags for their occupiers – Cartoon [CarlosLatuff]

The bill grants amnesty to non-Muslim illegal immigrants from three neighbouring countries, namely Bangladesh, Pakistan and Afghanistan. While India’s federal government says that the law will protect religious minorities fleeing persecution, opponents say that by dividing alleged migrants into Muslims and non-Muslim categories, it explicitly and blatantly seeks to enshrine religious discrimination in the law, contrary to the country’s longstanding, secular constitution and ethos.

The CAB is only one of the initiatives threatening India’s constitution. Another is the pan-India citizen verification process known as the National Register of Citizens (NRC). Critics say that it has become weaponised by hard-line Hindus and that its true motive is to disenfranchise many of India’s Muslims. When it was trialled in the Indian State of Assam, 1.9 million mainly Muslim citizens were made stateless overnight.

By themselves, the CAB and NRC may appear harmless. Seen within the context of the rise of Hindutva and the march towards re-creating India as a Hindu state, though, these measures serve a hostile and divisive political agenda.

The international community must support all Indians in their resistance to the hard-line Hindu nationalists and not indulge Hindutva’s racist ideologues in the same way that it has indulged Zionism since 1948. Hindu nationalists are clearly seeking the Israelification of India; they must be stopped.