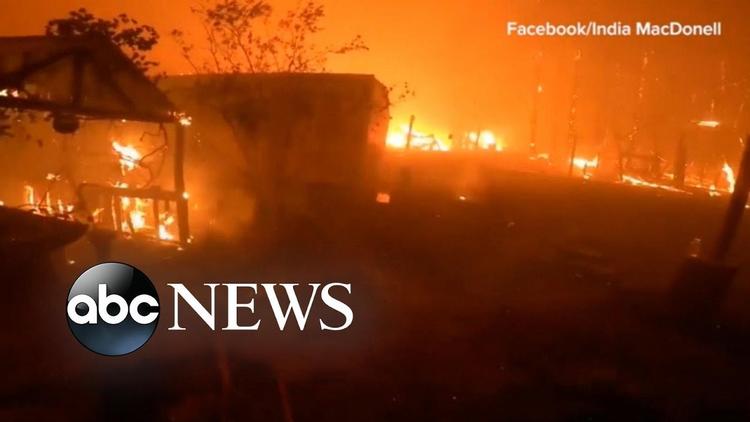 (Special to Informed Comment) – Australia is facing an all -encompassing disaster. Or is it? Even as fires circled much of the island Continent and for a time left only two roads out of the country’s largest city, Sydney, the nation’s Prime Minister refused to allocate more funds for volunteer fire fighters or to treat these events as anything more than the usual fires the nation experiences every summer. His refusal, punctuated by a slow return from a Hawaii vacation, was shocking, but it illuminates some lessons we might all learn. Australia could be a preview of not only the more widespread and intense fires we will be forced to endure in the near future but also of the pitfalls in the response to those fires.

As with many aspects of the ongoing planetary emergency a teenage girl shall lead us. As the PM continued to deny any connection between the raging fires and climate “Not even catastrophes like these seem to bring any political action,” said Thunberg. “How is this possible?”

This of course is just the point. Naomi Klein’s classic Shock Doctrine details the ways “natural” disasters often create the grounds for extraordinary political changes, often installation of a whole new class hierarchy. But such disasters don’t come wearing a label on their back. There are some indisputable facts, but many others that are speculative or poorly understood. Our ideology and ethics help constitute a prism through which we construct the narratives with which we understand events of this magnitude.

Morrison views these fiery events through a prism of faith in an extractive capitalism. Morrison’s single minded faith in extractive capitalism is so strong as to enable him to deny obvious and universally recognized facts. And part of his absolutist convictions is contempt for those who challenge his views. Thus in a speech to parliament two years ago Morrison taunted parliament while brandishing a lump of coal, laughing and goading the opposition during a debate about climate change, saying: “Don’t be afraid. Don’t be scared. It won’t hurt you. It’s coal.”

Environmental justice and other protest groups have demanded that the PM call a national state of emergency. Understandable and defensible as such a step would be, advocates must recognize that the PM will argue that opposition to government policy on coal is subversive. He attacked environmental activists in a November speech, warning of a “new breed of radical activism” that was “apocalyptic in tone” and pledging to outlaw boycott campaigns that he argued could hurt the country’s mining industry.

“We are working to identify mechanisms that can successfully outlaw these indulgent and selfish practices that threaten the livelihoods of fellow Australians, especially in rural and regional areas,” Morrison said. “New threats to the future of the resources sector have emerged,” he said. “A new breed of radical activism is on the march. Apocalyptic in tone. It brooks no compromise. It’s all or nothing.” These are the words of a leader who can do no more than demonize and seek to divide and conquer those who strive to cope with unprecedented fires that already have killed an estimated 500 million mammals, birds, and reptiles and which threaten to drive many species to extinction.

Thus the most sunny land on the planet seeks its salvation through the conviction that market gains from coal can fund any other resources needed to fight these fires, which ultimately are held to be conquerable.

This faith in an ultimately controllable environment may have encountered some challenges that have not received the emphasis they merit. Reporters and photographers repeatedly cited the size and intensity of the fires, but their unpredictability deserves more attention. As one of the fire fighters put it: “What happens in fires, they create their own winds and they create their own weather patterns. The flames are in the smoke and they’re up in the air. There’s nothing for them to be burning in the air. They’re just up there.”

Consider this piece from a recent Common Dreams news summary:

“A southerly change swept through at 5pm, making the fire even more erratic and changing the fire direction. Around this time, NSW[New South Wales] authorities began warning of a bushfire-generated thunderstorm that had formed over Currowan and Tianjara fires in the Shoalhaven area, on the NSW south coast.

The fire service said this would lead to increasingly dangerous fire conditions. Such storms, known as pyroCB, can produce embers hot enough to spark new fires 30km from the main fire Those fires would gain strength from the multiple feedback loops at the heart of the fire… It is now marching towards the Mount Piper power plant and Springvale coal mine, which would take months to extinguish. The irony of the coal-fired power station being destroyed by a bushfire that was partially the product of a drier climate is summed up… as “the ultimate climate change feedback loop”.” In such a context merely waiting for where the fire would next turn was itself a source of grave anxiety.

There is a class dimension to this story as well. Perhaps the most affluent are the ones that are most confident in the manipulability of the natural environment. They can escape the most dangerous and severe consequences. Once again PM Morrison is exemplary. Common Dreams again:

While his country was on fire, right-wing climate-denying Prime Minister Scott Morrison was on vacation in Hawaii. Morrison returned to Australia on Saturday after two firefighters died fighting one of three huge blazes near Sydney. “

Or can the wealthy always escape? I am inclined to think that in addition to the benefits and privileges wealth bestows it also conveys an exaggerated faith in one’s ability to avoid all the dangers faced by ordinary citizens. Common Dreams: “One Twitter user posted a picture showing from above the blazes around Sydney as Morrison was arriving in the city, reportedly after circling for an hour due to runway closures.”

Next time Morrison may not be able to land. These fires are obviously very dangerous and governments must do all in their power to cope with the continuing tragedy. But the long run requires some fundamental debates about the role of uncontrolled growth and hubristic attitudes to nature in starting and fueling these megablazes.