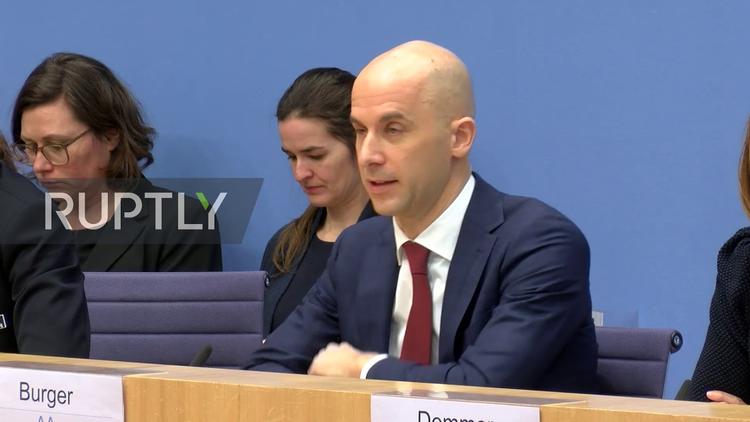 Amsterdam (Special to Informed Comment) – In the spirit of what the EU calls “de-escalation’’ German government spokeswoman Ulrike Demmer recently asserted an official belief that Iranian general Qassem Soleimani masterminded the 2019 Yemeni attacks on Saudi Aramco oil fields in Abqaiq —necessitating US retaliation. Demmer denied the Yemeni origin of the guerrilla response to a genocide in Yemen that Europe and the US did nothing to stop, and used the term “self-defence” for the New Year’s Trump-Pompeo assassination of Iraqi military officers – on Iraqi soil – to kill an Iranian target.

The EU has once again distanced itself from duties that come with being co-signatories of the Obama-era Iranian nuclear deal after the EU yielded to American pressure to reinstate sanctions.

Statements like those by Demmer and the meteorically risen Ursula von der Leyen, do not only destroy the trust of Tehran in relation to the treaty: these utterances show anachronistic eagerness, unmatched by US politicians, to participate in the Trump era and to make “Trump gestures” despite how the initial years of Trump’s reign met with fervent criticism and discontent from the same EU figureheads and opinion-makers.

Such increasingly convoluted stances on the key deal they signed, justified in a language of moral relativism, political correctness (Heiko Maas’s “sanctions against Iraq are unhelpful“) and amnesia, may be the air Brussels breathes and commonplace in diplomat schools, yet remain culturally foreign to the Iranian understanding.

Trump and Pompeo’s decision– spiteful of US Congress and Constitutional law– was followed by threats to target Iranian cultural sites like Persepolis, against the Geneva convention. Riveting much of the world, the killings have thus far generated only convoluted and lackadaisical responses from European policy spokespersons and the expert community.

In her statement, not only did Demmer sound like a US Republican by conflating the interests and identity of Washington DC with Riyadh: she also conflates Iran with the Yemeni Houthi uprising against the Saudi invasion.

Expressions of solidarity by EU pundits sound more unequivocally supportive of Trump and Pompeo’s crime than the response within the US political establishment. Former president Jimmy Carter called Trump to warn against war, speaking to Trump in the sole language he understands—that of money and expenses. Though Democrats maintain an aggressive stance on Iran and the region, most expressed discontent with the spite for Congress and the Constitution.

Rehearsed propagandistic statements require dismantling. In September 2019 Tehran denounced what it called “highly provocative, destructive” claims made by Britain, France and Germany. Did EU members seek to please Washington after Trump and Pompeo denied the Houthi rebels carried out the drone-attack as a response to the Saudi attempted genocide?

By claiming “no evidence” the attacks originated in Yemen, the Trump administration opts for Riyadh’s preferred conspiracy theory, inculpating Tehran.

Demmer either dismisses, or forgets the Saudi attempted genocide in Yemen when denying Yemeni guerillas’ responsibility for the attack on the Abqaiq oil fields, and by instead identifying Solemaini’s Quds force as the true culprit. Trump dismissed his own Congress’ overture to block US support for Saudi massacres.

Though Iran supports Houthi Arabs in Yemen with weapons and tactical advice (as Iran does with Lebanon’s Hezbollah) to claim these two act singularly at the highest levels of coordination, is both reactionary and analytically erroneous. Such assumptions are not only convenient to a broad neoconservative agenda: these are the European sounds Trump wants to hear. (Do EU officials intend to coax Trump into again raising NATO spending?)

Demmer mentioned Iran’s capture of a vessel in the Gulf as yet another official talking point justifying the assassination.

The Iranian retaliatory seizure (https://www.theguardian.com/world/2019/sep/16/iran-seizes-vessel-in-gulf-for-allegedly-smuggling-diesel-fuel-reports) came after a similar pirate-move in 2019 by British Royal Marines who, upon US request, abducted the Iranian tanker “Arian Dharya 1” in the British overseas territory Gibraltar, claiming the tanker coursing towards Greece would facilitate petroleum to Syria, in violation of sanctions which Iran had obviously never agreed to.

Tehran, at war with the Gulf and frustrated by Europe’s adamant support for Washington sanctions despite their status as co-signatories on the Obama-era Iranian nuclear deal, captured a vessel transporting oil to the Emirates. For years, Tehran has asserted its suspicion that Saudi Arabia and the Emirates are the bastion of support of Isil /Da’esh as Solemaini drove campaigns against the mercenary “caliphate”.

Symmetrically opposite, we find Western claims making no distinction between Arabic-speaking Shiite tribes in Yemen and their Iranian ally, justifying a bizarre “eye for an eye” combat to avenge Saudi grievances against Iran.

By going along with the strange symbiotic relationship between the US Republican establishment and Riyadh (previously explored in books like House of Bush, House of Saud

Europe risks getting embroiled, blindly, in a millennium-old Sunni-Shia conflict which Europe is incapable of understanding and which has today infused itself into regional capitalist wars.

“We don’t lament Soleimani’s death” stated Boris Johnson, whose party’s licensed arms deals with Saudi Arabia made just under 4.8 billion pounds during the Yemen crisis – at which point UK judges, under activist pressure, deemed the transactions unlawful. The recent attempted assassination of an Iranian liaison official in Yemen shows the neocon establishment’s outright identification with the interests of Saudi Arabia, scorning the nearly-forgotten protests against Western involvement in the Saudi campaign of collective punishment of Yemen. In 2018, the Western-sponsored Gulf massacres drew the consternation of US congress and high-level European judicial activists. Iranian support in Yemen (as in Iraq) only became crucial in the face of Western impotence to defy the US and British neoconservative establishment and respond to atrocities.

The Democracy in Europe Movement 2025 (DiEM25) must stand against any European solidarity with the American massacres, and must stand with initiatives such as those by the Italian dockworkers who halted Saudi shipments of weapons to the war in Yemen, stating “They shall not pass”

Arturo Desimone is an Argentinean-Arubian writer of fiction and poetry, and a visual artist based between Argentina and the Netherlands. He was born and raised on the Island Aruba.