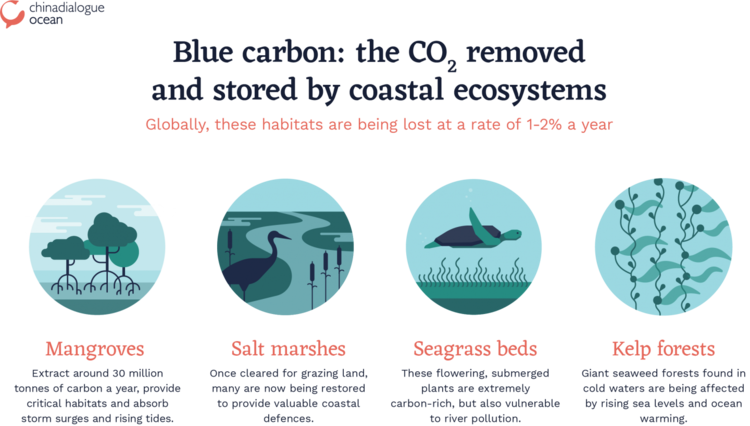 Indonesia has turned 40% of its coastal mangroves into prawn ponds over the past three decades, exposing thousands of kilometres of coastline to storm surges and deadly tsunamis. A fifth of the salt marshes along the Thames estuary in England disappeared in the last quarter of the 20th century, haemorrhaging millions of tonnes of carbon into the air. California’s offshore kelp forests are crashing, in the face of warmer waters and an invasion of sea urchins. 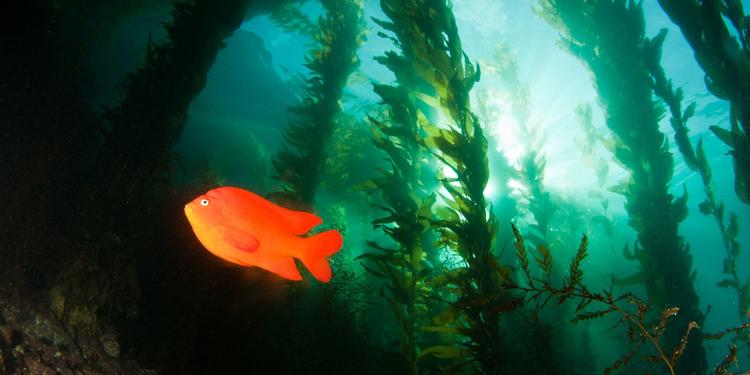 Scientists say such unheralded ecological catastrophes matter more for the climate than the headline-grabbing destruction of rainforests. Because, hectare for hectare, these coastal ecosystems hold more carbon than the lushest jungle.

This year has seen a growing call among environmentalists to restore natural ecosystems as a win-win for the twin environmental perils of our times – the collapse of biodiversity and the runaway threat to humans and nature alike from the climate crisis.

The emphasis of this search for “nature-based solutions” has been on forests. Researchers claimed in July that there is still room on our crowded continents for a trillion more trees that could soak up some 200 billion tonnes of carbon dioxide – or five years of current global emissions. But an equally important route to climate salvation may lie with the mangrove swamps, salt marshes, seagrass meadows and kelp forests that stretch along many shores all the way from the tropics to the Arctic.

Coastal ecosystems typically sequester carbon dioxide from the air at a rate of between 12.5 and 8 tonnes per hectare each year – several times faster than the net rate by mature tropical forests. Despite their diminishing range, recent estimates suggest that surviving mangroves absorb from the air around 30 million tonnes of carbon a year, while salt marshes extract as much as 80 million tonnes and sea grasses maybe 100 million tonnes.

Nobody is saying we don’t need to eliminate carbon-based fossil fuels from our energy system. Halting the billions of tonnes of carbon dioxide they emit each year remains the top priority for stabilising climate. But, with temperatures already 1C warmer than in pre-industrial times, the UN’s Intergovernmental Panel on Climate Change (IPCC) has warned that meeting the commitment of the 2015 Paris climate conference to halt that warming well below two degrees will also require restoring nature’s ecosystems, so they can draw more carbon dioxide from the atmosphere.

The potential of coastal ecosystems to store “blue carbon” was due to take centre stage at this December’s UN climate negotiations in Santiago, Chile. COP25 has now been relocated to Madrid, Spain, after the Chilean government cancelled its hosting role amid civil unrest.

First we have to stop the rot. The IPCC, in a report in September on climate and the oceans, estimated that nearly half of all coastal ecosystems had been lost over the past century due to construction, drainage for agriculture, conversion to fish ponds or climate change. As much as 1 million hectares of coastal wetland ecosystems are still being lost annually, according to the Blue Carbon Initiative. A recent study by the US National Academy of Sciences put the resulting emissions at around 500 million tonnes of carbon dioxide per year.

Yet global attention to the fate of these ocean carbon hotspots remains fitful at best. While the upsurge in deforestation in the Amazon transfixed the world over the summer, who was calling out the equally rapid rate of coastal ecosystem loss?

An ocean of solutions

Mangroves are tropical trees that grow in salt water between high and low tide. Their roots extend deep into coastal sediments. They flank something like 140,000 km2 of tropical coastline, in more than 100 countries, and flourish best where rivers bring plenty of sediment to the shore. The trees and the thick carbon-rich sediments maintained by their roots may hold as much as 6.4 billion tonnes of carbon, and capture 30 million tonnes more each year.

These oxygen-deprived sediments typically hold onto carbon for centuries, unlike oxygenated forest soils which release carbon dioxide into the atmosphere within a few decades.

Besides storing carbon, the tangled mangrove roots shelter complex ecosystems of sponges and worms, shrimps and sharks, while acting as important nurseries for fish. Combined with dense foliage, those roots are also immensely good at absorbing the energy of storms and tidal surges. A 100-metre wide strip of mangroves can reduce the destructive force of waves by 90%. Field research in Indonesia’s Aceh province after the 2004 Indian Ocean tsunami found that mangroves in front of villages reduced casualties by an average of 8% – representing 13,000 lives saved.

They also hold back routine rising tides. Their effect becomes very clear when they are removed. Since mangroves have been replaced by prawn ponds on the northern shore of Java, the sea has washed inland for several kilometres in places, swamping ponds and villages and filling inland rice paddies with salty water.

Away from the tropics, where it is too cold for mangroves, shallow coastlines are often populated by waterlogged masses of grasses and herbs, known as salt marshes. Just as farmers in the tropics have in recent times taken over mangroves for prawn and fish ponds, so landowners have often drained salt marshes to create grazing land.

But salt marshes are almost as good as mangroves as natural coastal defences. So they are changing tack. Faced with the inordinate cost of raising ever higher sea walls, governments in the Netherlands, UK and elsewhere are now starting to restore salt marshes by tearing down dykes and plugging up drains.

Flowering submerged marine plants known as seagrasses are found below low-water mark around all continents except Antarctica. The seagrass meadows they inhabit may cover some 30-60 million hectares, according to the National Academy of Sciences. They are, by some assessments, the most carbon-rich coastal ecosystems of all. Yet there have been no thorough surveys of their global extent. While they escape the ravages of coastal development, they are susceptible to pollution from rivers.

Similarly unmapped are the lush underwater expanses of kelp forests. Kelp is giant seaweed. It is among the fastest growing of all plants, capable of growing by more than half a metre a day and reaching up to 45 metres high, spreading a canopy of foliage just below the water surface.

Kelp forests are widely found in Mediterranean and cold waters from California to Alaska and Australia to the Russian Far East. Some studies suggest they may flank a quarter of the world’s coastlines. As the oceans warm, they are expanding into the Arctic, while disappearing from warmer temperate waters.

Besides changing ocean temperatures, coastal ecosystems are potentially vulnerable to rising sea levels. But the evidence is that they are good colonists. Provided they have sufficient sediment to rebuild, they are generally capable of climbing up beaches as fast as the current rate of rising tides.

These days that adaptability is often compromised. As they head inland, they often find their way barred by sea walls, highways or other infrastructure, leaving them squeezed and with nowhere to go. Studies suggest that a 50cm rise in sea levels by 2100 would result in the loss of more than half of current coastal wetlands.

So their future health is likely to depend on active intervention – not just to protect what remains but to restore what is being lost. That chimes with the wider agenda for the restoration of natural ecosystems. The UN has designated the 2020s as the Decade of Ecosystem Restoration. Its Convention on Biological Diversity will establish a framework for action over the coming decade when it meets in Kunming next year.

Climate negotiators are joining the restoration party, too. At the Paris climate conference in 2015, 28 countries said they intend to meet their emissions targets in part by capturing carbon in coastal ecosystems. Among them was Indonesia. It could “sail through” its Paris pledges simply by conserving its 3.8 million hectares of mangroves and seagrasses, according to Daniel Murdiyarso of the Center for International Forestry Research, based in Bogor, Indonesia.

The upcoming climate conference in Chile – now to be held in Madrid – was due to receive a portfolio of ideas for nature-based solutions, including “blue carbon”, collected by a working group chaired by China and New Zealand.

But turning ecological aspiration into reality may not be easy. Planting mangroves, sea grasses and salt marsh species has a generally poor record of success. There is a chicken-and-egg problem. To grow successfully, they require the stable shores that only established ecosystems can provide. According to Wetlands International, a Netherlands-based NGO, attempts round the world to re-establish mangroves have usually failed.

A study in Sri Lanka in 2016 found that of 23 sites where mangrove restoration had been attempted, only three showed more than 50% survival rates, and at nine sites inspectors could find no surviving plants at all. Other countries did little better. “Tens of millions of euros of public and private conservation funds has gone to waste,” says the NGO.

Another recent international review found that, while conservation of existing coastal ecosystems could successfully avoid emissions of carbon dioxide and was very cost-effective, “restoration of vegetation to increase CO2 capture has a very low cost-effectiveness.”

Rather than planting, it may be better to help nature do its own restoration, Wetlands International has concluded. In Indonesia, it is currently pioneering the installation of brushwood barriers along the shoreline of northern Java. The hope is that the barriers will reduce coastal erosion and allow seeds to settle and germinate in stabilised sediment.

The project is in its early days. But the prize for successfully demonstrating how to restore coastal ecosystems such as mangroves to store carbon will be high. According to the National Academy of Sciences, restoring and creating coastal wetlands has the potential to “more than double” the current rate of carbon capture of these vital ecosystems.

Fred Pearce is a freelance author and journalist based in the U.K. He is a contributing writer for Yale Environment 360 and is the author of numerous books, including “The Land Grabbers, Earth Then and Now: Potent Visual Evidence of Our Changing World,” and “The Climate Files: The Battle for the Truth About Global Warming.”