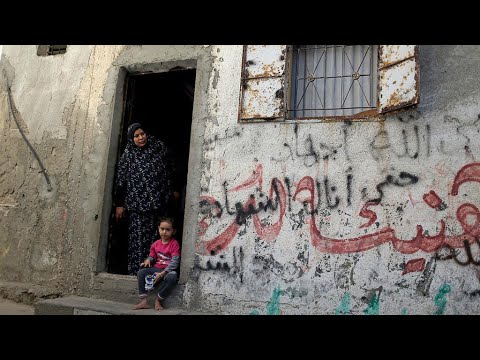 Ann Arbor (Informed Comment) – Dozens of Palestinians were injured in protests throughout the Palestinian West Bank by Israeli Occupation troops on Wednesday. Gaza was closed down by a general strike. This according to the Egyptian newspaper al-Misrawi.

Two Palestinians were wounded by live fire by Israeli troops in al-Bira.

Palestinian demonstrations and confrontations with Israeli security forces broke out for a second day throughout the Palestinian Occupied Territories in response to the Trump Plan for the Mideast, announced Tuesday. This according to the Palestinian news site Dunya al-Watan.

Young Palestinians confronted Occupation security forces near al-Quds University in Abu Dis near Jerusalem, closing the main road near the university. They were met with tear gas and rubber bullets from the Israeli side. No casualties were reported. Trump had suggested the desperately poor town as the capital for the rump Palestinian Bantustan he wants to create.

Palestinians, including students in the al-Urub Camp north of Hebron marched peacefully in protest against the terms of the plan and against American backing for the Israeli occupation of the Palestinians , and many suffered from the suffocating effects of the tear gas fired at them. Israeli Occupation troops stationed at the front gates of the camp fired tear gas toward the procession, which included school children.

In Ramallah, nationalist and Muslim organizations called for a Day of Rage in protest against this act of aggression by the United States.

In Jericho and Al Aghwar governorate, the Israeli occupation army imposed harsh restrictions and planted barriers in various places to stop Palestinians from various governorates from reaching it, under the slogan of “Protecting Al Aghwar,” after it was specified in the Trump Plan. Activist Aref Daraghma told the official Palestinian news agency that the Israeli Occupation Army was conducting drills Wednesday morning and was massing throughout the governorate all night Tuesday into Wednesday. The local Committee against The Wall and against Colonization announced a program of activist actions for the protection of Al Aghwar beginning at 10 am Friday morning. The marches will end at lands where the Israelis have prohibited people from farming them.

The Israeli military said that it fired the tear gas in response to Palestinian rock-throwing at its troops throughout the Palestinian West Bank.

Embed from Getty Images
Members of Israeli security detain a Palestinian protester during a rally against a US-brokered Middle East peace plan, outside the Damascus Gate of the Old City of Jerusalem, on January 29, 2020. – Palestinians protested against the US President’s controversial plan that gives Israel an American green light to annex key parts of the occupied West Bank. The protests, including isolated clashes, underscored the depth of frustration with a proposal seen as overwhelmingly supportive of Israeli objectives and drafted with no Palestinian input. (Photo by AHMAD GHARABLI / AFP) (Photo by AHMAD GHARABLI/AFP via Getty Images).

In Bethlehem, the General Union of Palestinian Teachers in the city announced a protest break from classes in schools throughout the district for 11:30 am so that students could mount protest marches that would leave at noon from the Bab al-Zuqaq intersection.

Inside Israel, Israeli college students of Palestinian heritage organized a protest at the gates of Tel Aviv University. The Arab Student Movement in the university issued a statement that said in part, “We, male and female Palestinian Arab students, who form an indivisible part of the Palestinian struggle against colonialism of all sorts in any place it exists, since the student movement has long been a pillar of revolutionary Palestinian action against all colonialist plans for ethnic cleansing.”