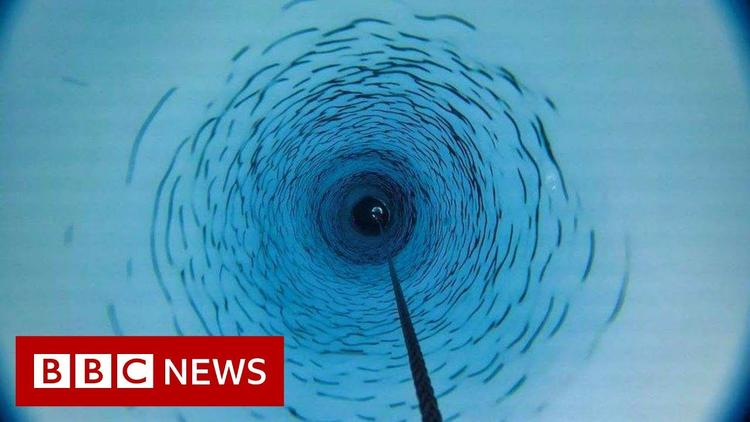 Rising global temperatures and warming ocean waters are causing one of the world’s coldest places to melt. While we know that human activity is causing climate change and driving rapid changes in Antarctica, the potential impacts that a warmer world would have on this region remain uncertain. Our new research might be able to provide some insight into what effect a warmer world would have in Antarctica, by looking at what happened more than 129,000 years ago.

We found that the mass melting of the West Antarctic Ice Sheet was a major cause of high sea levels during a period known as the Last Interglacial (129,000-116,000 years ago). The extreme ice loss caused more than three metres of average global sea level rise – and worryingly, it took less than 2˚C of ocean warming for it to occur.

To conduct our research, we travelled to an area on the West Antarctic Ice Sheet and drilled into so-called blue ice areas to reconstruct the glacial history of this ice sheet.

While most Antarctic researchers drill deep into the ice to extract their samples, we were able to use a technique called horizontal ice core analysis. As you travel closer to the mountains of the ice sheet, the ice that been brought to the surface by these winds progressively gets older. We then were able to take surface samples on a straight, horizontal line across the blue ice area to reconstruct what happened to the ice sheet in the past.

Our team took many measurements. We first looked at the fine layers of volcanic ash in the ice to pinpoint when the mass melting took place. Alarmingly, the results showed that most ice loss happened at the start of Last Interglacial warming, some 129,000 years ago – showing how sensitive the Antarctic is to higher temperatures. We think it’s likely this melting started well before the ocean warmed by 2˚C. This is concerning to us today, as ocean temperatures continue to increase, and the West Antarctic is already melting.

We also measured temperature-sensitive water molecules across the blue ice area. These isotopes revealed a large shift in temperatures, highlighting a major gap in our record at the start of the Last Interglacial. This indicates a period of sustained ice loss over thousands of years.

This period of missing ice coincides with extreme sea level rise, suggesting rapid ice melt from the West Antarctic Ice Sheet. DNA testing of ancient microbes preserved in the ice revealed an abundance of methane-consuming bacteria. Their presence suggests that the release of methane gases from sediments under the ice sheet may have also played a role in accelerating the warming process.

The West Antarctic ice sheet can tell us a lot about the effect of warming ocean temperatures because it rests on the seabed. It’s surrounded by large areas of floating ice, called ice shelves, that protect the central part of the sheet. As warmer ocean water travels into cavities beneath the ice shelves, ice melts from below, thinning the shelves and making the central sheet highly vulnerable to warming ocean temperatures. This process is currently being researched on the West Antarctic Thwaites Glacier, nicknamed the “Doomsday Glacier”.

Using data from our fieldwork, we ran model simulations to investigate how warming might affect the floating ice shelves. These ice shelves protect the ice sheets and help slow the flow of ice off the continent. Our results suggest a 3.8 metre sea level rise during the first thousand years of a 2˚C warmer ocean. Most of the modelled sea level rise occurred after the loss of the ice shelves, which collapsed within the first two hundred years of higher temperatures.

These findings are worrying – especially if persistent high sea surface temperatures could prompt the larger East Antarctic Ice Sheet to melt, driving global sea levels even higher. But our findings suggest the West Antarctic Ice Sheet may be close to a tipping point. Only a small temperature increase could trigger abrupt ice sheet melt and a multi-metre rise in global sea levels.

At the moment, research suggests that global sea levels could rise between 45-82cm over the next century. However, it’s thought that Antarctica will only contribute around 5cm of this – most of this sea level rise will be caused by warmer ocean waters and the melting of the Greenland Ice Sheet. But based on our findings, Antarctica’s contribution could be much greater than anticipated.

Despite 197 countries committing under the Paris agreement to restricting global warming to 2˚C by the end of this century, our findings show that even minor increases in temperature could have far-reaching impacts.