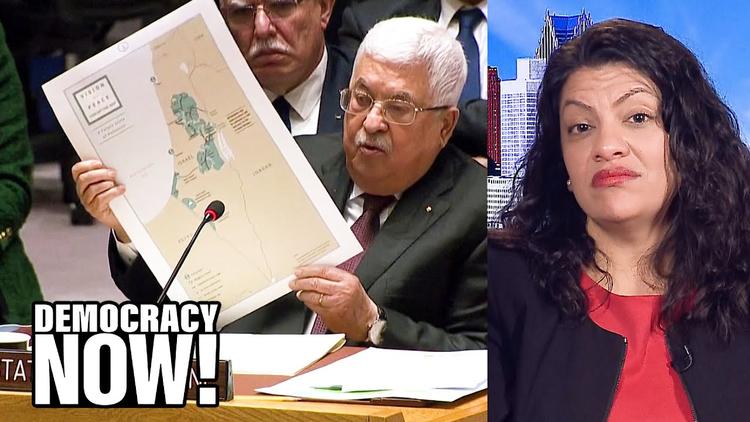 ( Democracy Now! ) – We continue our conversation with Congressmember Rashida Tlaib of Michigan, the first Palestinian-American woman elected to Congress. She responds to President Trump’s Middle East plan, under which Israel would gain sovereignty over large areas of the occupied West Bank, Jerusalem would be under total Israeli control, and all Jewish settlers in the occupied territory would be allowed to remain in their homes. Tlaib says the plan was formulated with a “racist lens” that ignores Palestinian lives and aspirations. Tlaib says she wants people “to know what the human impact is of taking people’s land, taking people’s livelihood away from them.”

This is a rush transcript. Copy may not be in its final form.

AMY GOODMAN: “No Es Mi Presidente,” “Not My President,” performed by Taína Asili, and she’s coming up on Democracy Now! in just a minute. But we wanted to stay with Congressmember Rashida Tlaib for just one more minute.

PRESIDENT MAHMOUD ABBAS: [translated] This plan will not bring peace or stability to the region, and therefore we will not accept this plan. We will confront its application on the ground. This is a summary of the project that was presented to us. This is the state that they will give us. It’s like a Swiss cheese, really. Who among you will accept a similar state and similar conditions?

JUAN GONZÁLEZ: Well, Rashida Tlaib, you’re the congressmember of Michigan’s 13th Congressional District. Along with Ilhan Omar, she is the first Muslim woman elected to Congress. Your response to the president’s plan and to the response from the Palestinian Authority?

REP. RASHIDA TLAIB: You know, I grew up in Detroit, the most beautiful, blackest city in the country. And so much what I learned here of these forms of kind of oppression and structural, I think, racism that is so present in all different processes, but even just, you know, fighting right now in my own backyard against unconstitutional taking of people’s homes by overassessing their homes and everything, there’s so many connectivity there to — by what the current president is pushing forward in trying to basically legalize theft for so many of the Palestinian families that are left there. I can tell you, you know, for me, what’s really critically important for people to understand, that with all these terminologies, with colleagues always asking me, “What does occupation mean?” I want listeners to know what the human impact is of taking people’s land, taking people’s livelihood away from them. And this plan just continues to dig into that approach to what’s happening in Palestine and Israel.

And I can tell you I want to hear more and more of those that are on the ground there, both Palestinians and Israelis who are against occupation, who want to see a true solution to there that actually involves them being having a seat at the table. I think that that’s not what’s going to happen, when the president just sits with his buddies and others that only see it through a very, I believe, racist lens that is this kind of othering politics. And also it’s very demonizing in the way the president and even his son-in-law and others have depicted Palestinians, as this is what they deserve, they don’t deserve anything more. Well, I can tell you, my grandmother lives in the West Bank, and she deserves human dignity. And this does not provide her human dignity, especially in her last years. She is a kind, compassionate woman who just wants to live freely with equality, with the freedom to travel, with the freedom to access healthcare, opportunities that help her have a better life.

AMY GOODMAN: Rashida Tlaib, we want to thank you for being with us, Democratic congressmember from Detroit, first Palestinian-American congresswoman. This is Democracy Now! When we return, Taína Asili and Eve Ensler. Stay with us.

This is viewer supported news. Please do your part today.Donate

The original content of this program is licensed under a Creative Commons Attribution-Noncommercial-No Derivative Works 3.0 United States License. Please attribute legal copies of this work to democracynow.org.