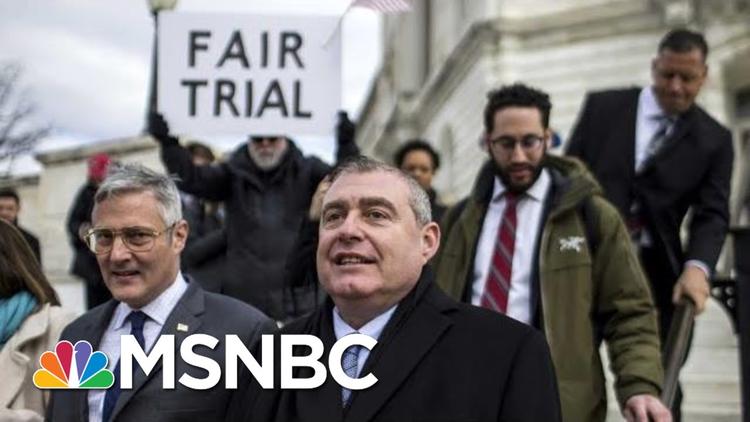 THE LAW OFFICES OF JOSEPH A. BONDY

As the Senate’s vote on whether to call witnesses and receive evidence draws near, we feel compelled to provide a brief summary of what Mr. Parnas’s testimony would be. For the past several months, we have diligently pursued an opportunity for Mr. Parnas to provide complete and truthful testimony to the Government and Congress regarding Mr. Parnas’s activities in connection with the efforts of President Trump to secure concessions from Ukraine, in exchange for American aid. Regrettably, Mr. Parnas has yet to be deposed or otherwise heard under oath. If Lev Parnas was called as a witness, he would provide testimony based upon personal knowledge, corroborated by physical evidence including text messages, phone records, documentary evidence, and travel records, which is directly relevant to the President’s impeachment inquiry. This would include, but is not limited to, the genesis of his relationship with President Trump and the President’s personal attorney, Rudolf Giuliani, and his actions in Ukraine on behalf of the President, as directed by Mr. Giuliani.

Solomon, Attorneys Joe diGenova and Victoria Toensing, Mr. Giuliani, and others. He is prepared to review and explain relevant phone records, text messages, and other evidence in connection with these activities.

Mr. Parnas would explain in detail the thousands of micro-steps he took in connection with this plan, including his trips to Ukraine for the purposes of meeting with Presidents Petro Poroshenko in February 2019 and Vladimyr Zelensky’s chief of staff in May 2019, to directly convey the President’s “quid pro quo” of demanding public announcements of anti-corruption proceedings regarding the 2016 election and the Bidens in exchange for American financial aid, and every step taken to secure those interactions, including whom he met with and what directives he received from Mr. Giuliani.

Mr. Parnas would identify the times and places where he had overheard the President speaking with Mr. Giuliani, and the occasions on which he interacted directly with the President. Mr. Parnas would speak about the frustrated efforts of Mr. Giuliani to meet with President Zelensky on behalf of the President, and the May 12, 2019 meeting Mr. Parnas had with Zelensky’s top assistant, Sergei Shefir, at which he informed him that if he did not announce an anti-corruption investigation into the Bidens and remove three people from his cabinet, then all aid would be withheld from Ukraine and Vice President Pence would not attend Zelensky’s upcoming inauguration.

Mr. Parnas would explain the conversation he overheard between Mr. Giuliani and then- Energy Department Secretary Rick Perry, who attended the inauguration in lieu of Vice President Pence, and the quid pro quo that Mr. Perry conveyed while there. Mr. Parnas would testify to the meeting he attended between Mr. Giuliani and special envoy to Ukraine, Kurt Volker, at which Mr. Volker asked Mr. Giuliani to help facilitate a call and a face-to-face meeting with Zelensky and Trump. Mr. Parnas would explain that Mr. Volker connected Mr. Giuliani with Ambassador Gordon Sondland and Ukrainian Official Andrey Yermak, to try to facilitate a call and face-to-face meeting between Trump and Zelensky.

Mr. Parnas would testify regarding Mr. Giuliani’s efforts to facilitate the July 25, 2019, call between Presidents Zelensky and Trump. He would testify that President Trump made clear to Zelensky that investigation into both the 2016 election and the Bidens needed to be announced, and that Trump and Zelensky agreed that they would each send a trusted representative to meet and try to resolve the issue.

Mr. Parnas would recount traveling with Mr. Giuliani to Madrid, to meet with Mr. Yermak for this purpose. He would explain that, at the meeting, Mr. Giuliani told Mr. Yermak once again that the President wanted there to be a public announcement of an investigation into the 2016 election, investigation into the Bidens, and the firing of Zelensky’s chief of staff and other people within the Zelensky administration. Although Mr. Yermak agreed while in Madrid, things did not progress. As a result, and with the President scheduled to travel to Poland to meet with President Zelensky, Secretary Bolton flew to Ukraine, where he reiterated the matters that had been discussed in Madrid.

Mr. Parnas would also explain that the conversations between Messrs. Volker, Yermak, Sondland, Giuliani and he continued in an effort to have the two Presidents meet at the United Nations. The message remained that if President Zelensky would not start complying with the agreement, then American aid would be withheld and any hope for a relationship would quickly deteriorate. Soon thereafter, the two Presidents met at the United Nations. During the time of their meeting, Mr. Parnas was in New York City, in constant contact with Messrs. Yermak and Giuliani, with Mr. Giuliani exchanging information to ensure a successful meeting. Mr. Parnas would testify that at all times he was acting at the direction of Mr. Giuliani, on behalf of his client the President, and that the President and a number of the people in his administration and the GOP were aware of the demands being imposed upon Ukraine.

We urge you to endorse voting in favor of calling witnesses and hearing evidence, so Senators can make a fully informed choice in the President’s impeachment inquiry, based upon all the relevant facts.